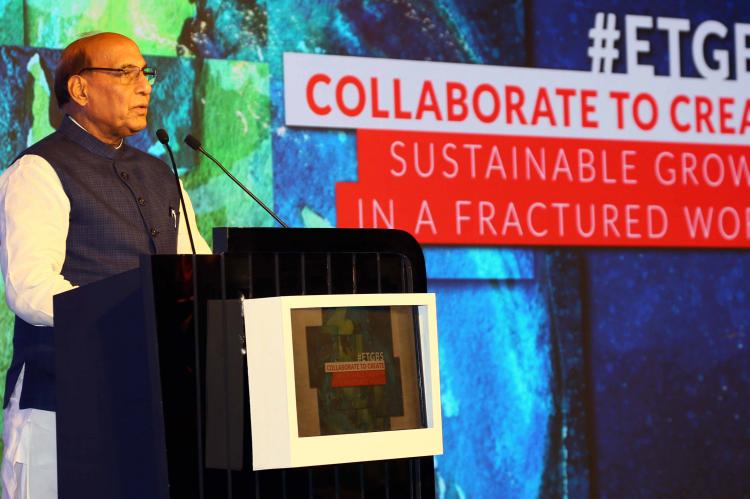 Raksha Mantri Shri Rajnath Singh has called for an increased participation of the private sector in defence manufacturing to realise the Government’s vision of making India a $5 trillion economy by 2024. In his address at the Global Business Summit here today, Raksha Mantri said, the manufacturing sector has the potential to reach $1 trillion by 2025 and the Government is striving to achieve the goal by implementing key flagship programmes like ‘Make in India’, besides building policies relevant to the digital-economy and fostering human-capital.

Urging the defence industry to make best use of the emerging opportunities, Raksha Mantri said, a slew of structural reforms has been taken by the Government to create increased synergy between the industry and the public sector to overcome the challenges of private investment in defence. He listed out several steps taken under the ‘Make in India’ initiative, including greater scope for domestic industry in defence tenders, simplification of the industrial licensing process, hike in FDI cap, making defence export less stringent, streamlining the defence offset policy, opening the government-owned trial and testing facilities for the private sector; setting up of two defence industrial corridors and promotion of innovation through participation of start-ups and small and medium enterprises.

“In our envisaged Defence Production Policy, we have clearly spelt out our goal to achieve a turnover of $26 billion in aerospace and defence goods & services by 2025. This will have huge implications for India’s endeavours to promote R&D, innovation and its efforts to secure a place in global supply chains,” Shri Rajnath Singh said. He added that the necessity of becoming internationally competitive, globally innovative and structurally efficient demands that the private sector plays a crucial role in defence production.

Shri Rajnath Singh underlined that while the primary aim of Defence production is to cater to the needs of the Armed Forces, thrust is also being given for enhancing exports. He said, Defence Public Sector Undertakings have been encouraged to increase their export portfolio to 25 per cent of their turnover and the Government is willing to extend Lines of Credit and grants to friendly foreign countries over the next five years. “The government aims to achieve exports of defence goods & services to the tune of $5 billion in next five years. All possible support would be extended to the private sector so that they can contribute significantly to enable us to achieve the said target,” he added.

Highlighting the Government’s decision to enhance foreign equity cap from earlier 26 per cent to 49 per cent under the automatic route and beyond 49 per cent to up to 100 per cent under the government approval route, Raksha Mantri said, the increase in FDI cap has begun to show results. “Till December 2019, the defence and aerospace sector has received inflows of over Rs 3,155 crore. Of this, Rs 1,834 crore have received since 2014. I am sure that the volume of investment will increase many-fold when some of the major programmes, which are in the pipeline, move into the execution phase,” he added.

Shri Rajnath Singh stressed that the intention of the government is not just limited to bringing reforms but to act as an incubator, catalyst and facilitator for promoting investment and achieving self-reliance in defence manufacturing. “We understand that Defence R&D in private sector will take time to establish itself. To give a boost to this process, we have opened opportunities through DRDO with a zero fee for Transfer of Technology (ToT), free access to over 450 patents, access to test facilities and an upfront funding of up to Rs 10 crore. More than 900 licensing agreements for ToT have been signed with industries,” he said.

Raksha Mantri also mentioned about the opportunities being provided by the Government for the manufacture of mega defence programmes including fighter aircraft, helicopters, tanks and submarines through the Strategic Partnership Model that will allow private companies to grow in stature and become global giants in the coming years.

Shri Rajnath Singh said, Buy (Indian–IDDM) [Indigenously Designed Developed and Manufactured], Buy (Indian), and Buy & Make (Indian), are the three most preferred categories for procurement for Ministry of Defence. “By prioritising these categories over direct import, we want to provide greater scope to the local industry, including the private sector, to participate in defence contracts and contribute to the self-reliance and employment generation,” he added. Shri Rajnath Singh expressed appreciation that during the last five years, Government accorded approval to more than 200 proposals worth Rs four lakh crore in which Indian Industry would be engaged in defence manufacturing either directly or in collaboration with foreign Original Equipment Manufacturers.

Describing the Micro, Small and Medium Enterprises (MSMEs) as silent performers, Raksha Mantri said, efforts are being made to double the active their base in defence and aerospace from 8,000 to 16,000. He added that Innovations for Defence Excellence (iDEX) was formulated with the objective to bring start‐ups to innovate, develop technologies and solve problems related to Defence and Aerospace.

Shri Rajnath Singh voiced the Government’s aim to double the size of Aeronautics Industry from Rs 30,000 crore to Rs 60,000 crore by 2024 and provide increased opportunities to global aerospace industry to become supplier of Aero‐components. He said, a number of major platforms are envisaged in defence aerospace sector including India’s 90-seater civil aircraft, developing civil helicopter industry of $5 billion in PPP model, and New Aero Engine Complex in Defence Corridor with industry participation.

Shri Rajnath Singh assured the industry that the Government is open to new ideas and committed to fully harness the energies, entrepreneurship spirit and enterprise of private sector in the defence sector. He expressed confidence that the industry will contribute even more to the Government’s efforts towards indigenisation of defence production.

Various policy makers, academicians and corporate heads were among those present on the occasion.