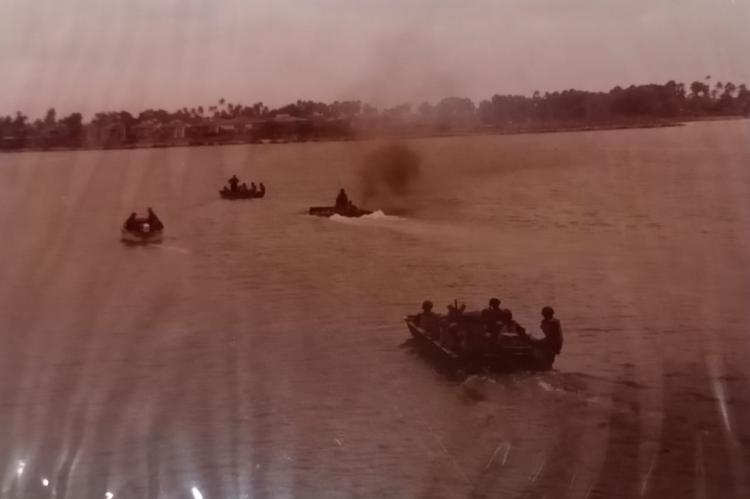 India’s intervention in Sri Lanka in July 1987 was the first overseas deployment of the Indian Armed Forces outside the UN charter post-independence. When this operation is reviewed many flaws that ailed the planning and execution are noteworthy even this day.

If war is the continuation of politics by other means, then it is essential to first define the political objectives flowing into a national security strategy before any effective use of force can be truly contemplated. The failure of our Indian misadventure in Sri Lanka bears testimony to the lack of clear political and military objectives and appropriate military strategies.

It is, therefore, unfortunate that even after over seven decades after Independence, India still does not have a clearly articulated national security strategy. Only such a strategy can define the types of contingencies the military is expected to address, leading to appropriate military strategies, doctrines and required capabilities.

That would define the structures required for the conduct of synergised Operations with the requisite communications and training requirements.

In 1987, there was no integrated national security body to make informed decisions on issues affecting national security. Cabinet Committee on Political Affairs (CCPA) was the only forum to carry out this task. During the Sri Lanka operations, a core group was formed to look after the day to day issues. This empowered group functioned under the chairmanship of the Minister of State, External Affairs and in his absence the Cabinet Secretary. Similarly, the Chiefs of Staff Committee (COSC) was the only palliative to meet the requirements of Joint Services operations.

It would be pertinent to note that the Military Operations and Military Intelligence Directorates did not have dedicated desks for Sri Lanka.

Armed forces had fought wars in 1965 and 1971 with similar decision-making structures probably with their attendant deficiencies. However, India’s Sri Lanka operation qualitatively differed from all of them because it was conducted overseas. The Indian force in Sri Lanka got involved in a conflict that was neither contemplated nor planned for.

Sinhala language classes for defence personnel started in the 90s. It is the only corps of the Indian Army whose strength was reduced when the Gen Krishna Rao Committee recommendations were implemented.

In 1987, before the Indian Peace Keeping Force (IPKF) operations started, the Intelligence Corps had a total strength not exceeding 2500 all ranks. Classified as a minor corps, traditionally employment of Military Intelligence was largely confined to security and combat intelligence, with limited intelligence planning and battlefield acquisition capabilities.

India’s security focus was largely on Pakistan. As a corollary, Sri Lanka was not one of the focus areas of Military Intelligence. Operation Brass Tacks had just been completed in May 1987, two months before the Army had to send a task force to Sri Lanka following the signing of the India-Sri Lanka Accord (ISLA) in July 1987.

Research and Analysis Wing (RAW), the Indian external intelligence agency, was the lead agency in the arming and training of the LTTE. It had managed to penetrate the other militant groups and was the coordinator for all parleys before the induction of IPKF and throughout the deployment.

While IPKF was engaged in operations, the role of RAW and its continued engagement with the LTTE and other militant groups will remain a dark chapter.

The inability of RAW, as well as those engaged at the macro level, did not foresee the LTTE going rogue. Having nurtured LTTE, it failed to provide a comprehensive intelligence picture as well as a SWOT analysis on its brainchild.

Any sharing of intelligence if any was on a personal rapport and not an organised/structured dissemination to the Formation HQs.

The Q Branch of the Tamil Nadu State Police and the Joint Directorate of the IB, Chennai provided no information throughout the entire IPKF operation. They had enormous information on the LTTE and its tentacles in Tamil Nadu which could have helped us in our operations against the LTTE. However such information was never provided.

In the case of the Q Branch, this was mainly due to the absence of formal orders from the state government which had taken a politically hostile stand against the IPKF operations. The IB usually fobbed off our requests saying that they had only political information, though in counter-insurgency political information also had a great relevance on military operations.

Jayalalitha government had banned its Q Branch from giving any assistance to the MI or the IPKF in general. Sometimes even contractors found it difficult to source supplies for the IPKF from TN and had to bear extra costs getting them from other states.

Before the signing of the India-Sri Lanka Agreement (ISLA), around May 1987 an intelligence team of one officer and six Non-Commissioned Officers was moved to Chennai from the parent unit in Gorakhpur for collecting intelligence from Sri Lanka. Till the end of the IPKF operations, this was the only dedicated intelligence resource available to the Directorate General Military Intelligence (DGMI). Subsequently, it was built up into an intelligence unit.

After the induction of the 54 Infantry Division in the first week of August 1987 in Sri Lanka, a few Tamil speaking Intelligence Corps officers and NCOs were attached to the OFC HQ at Chennai. The intelligence personnel were dispatched to Palali on August 5, 2007, with no functional resources, other than the attached personnel.

The two MI officers of the team resurrected their contacts with Sri Lanka Tamils to send periodic reports to the DGMI.

In September 1987, when the situation became murky with LTTE, 57 Moutain Divison Intelligence and Field Security(FS) Company with about 60 personnel were moved to Palali. Its OC was upgraded to a Lieutenant Colonel’s appointment. This intelligence unit continued to be under HQ OFC and this caused some avoidable confusion in HQ 54 Infantry Division. Its intelligence officers were scrupulously excluded from all deliberations of the Divisional HQ. They were asked to stay out of all interactions with the LTTE during the political parleys.

As the Jaffna operation commenced and the induction of troops took place rapidly, the OC 57 Division Intelligence and FS Company were asked to brief the troops before their operational induction. Similarly, the unit was tasked to interrogate all and sundry rounded up in the first flush of operations.

However, by the time two more divisions were inducted into Sri Lanka and the structure of the Advance HQ of the Overall Force (OF) Company was formalised, an intelligence unit specifically structured for the IPKF operations designated as the Ad-hoc liaison unit was raised. The unit had both intelligence acquisition and interrogation capabilities.

The unit commanded by a Lieutenant Colonel had its headquarters in Chennai with a team each deployed in Vavuniya, Trincomalee and Batticaloa. It also had three rehabilitation centres (with one interrogator each) for the three divisions. In all, it had 12 officers and over 100 other ranks. One Sinhala knowing officer was also posted sometime towards the end of 1988.

Communication intelligence was provided by the EWCP. It worked closely with the troops and provided accurate real-time information.

As early as September 1987, the MI detachment in its assessment to the DGMI had said that if the IPKF went to war it would take three years to reduce it to manageable proportions. This assessment almost came true. Military Intelligence made efforts to recruit Sinhala speaking Tamils.

MI officers had made some useful contacts both within the LTTE and among pro-LTTE civilians, in Jaffna and Trincomalee. They provided valuable inputs on political moves of the LTTE as well as on some key issues like LTTE’s contact with the Janatha Vimukthi Peramuna (JVP), which was carrying out its insurgency in Sinhala areas, procurement of MANPADS by the LTTE, contacts between the Sri Lanka President Premadasa and the LTTE leadership.

Lack of MI resources allocated before the operation by the DGMI had resulted in absence of intelligence assets in Sri Lanka. This harmed the initial inability of the MI to provide timely and useful information to 54 Inf Div.

Despite receiving inputs from both RAW and IB and other agencies regularly, the DGMI did not provide assessments that could have helped the IPKF operations. Similarly, the HQ Southern Command also failed to provide useful assessments or inputs.

There was little MI input on LTTE activity in Tamil Nadu. This was mainly due to the completely negative attitude of the Tamil Nadu Government resulting in total denial of access to information on the LTTE available with the state intelligence.

The LTTE was acting with impunity in Tamil Nadu during the entire period of operations, exposing the troops to potential LTTE threats. This created a great feeling of insecurity among our Tamil sources, who felt that we were not seriously involved in tackling the LTTE.

Most of the MI officers had little background knowledge on Sri Lanka or its environment when they were inducted. There is a requirement for building regional specialists in the course of MI officers’ careers.

Intelligence NCOs performance was far below par. They could not carry out elementary interrogations. Both officers and NCOs tended to accept un-assessed information from sources without vetting the credibility.

Intelligence staffing was poor in formation headquarters. At one stage, in three of the four divisions, the GSO1 (Int) were low medical category officers; a few of them had no intelligence exposure. As intelligence had limited dedicated staff resources, their posting in divisions was far from prudent.

The quality of frontline soldiers’ knowledge of handling prisoners, segregating them for detailed interrogation etc. was poor. The Command HQ was in the best position to address such lacunae to provide short term training to officers and NCOs from all arms on a rotational basis. This was probably not even contemplated, though it had been done in the past in 1971.

There was practically no input from Air or Naval Intelligence sources. This was surprising because in Colombo more than one merchant ship officer reported seeing fishing boats flashing ‘LTTE’ in semaphore signals in the Gulf of Mannar indicating regular movement of boats supplying the LTTE from Tamil Nadu.

The Tamil media in Tamil Nadu and Sri Lanka was rich in open-source information which went untapped due to a shortage of manpower. Similarly, there was not enough interface with Indian media men who had travelled into LTTE areas either covertly or openly. This rich source also went unexploited.

Another rich source of intelligence are the Sri Lanka officers doing courses at our Training Institutions. They need to be developed as assets and should be able to corroborate intelligence inputs over the years. Intelligence gathering is a continuous effort and needs to be addressed diligently by professionals.

*Author is an Indian Army veteran and was deployed in Sri Lanka with his unit 65 Armoured Regiment as part of IPKF. Views Expressed here are personal.

Editor’s Note – This article is part of series on Ops Pawan by its veterans.