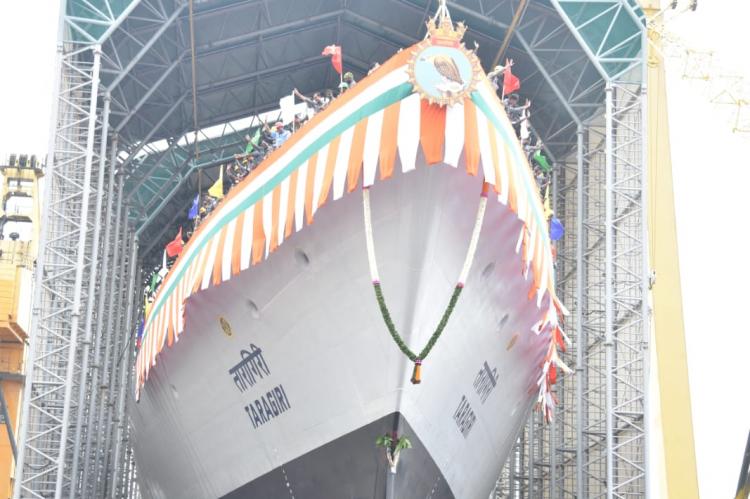 The fifth Stealth Frigate of P17A 'Taragiri', being built at MDL was launched , on Sunday. In compliance with the notification issued by the Ministry of Home Affairs, Government of India declaring a state-mourning on September 11, the event was limited to a Technical Launch as the event is tide dependent, any change in the schedule was not possible.

The Warship Design Bureau (WDB) and the MDL teams having demonstrated multiple successful conventional launches in the past, have honed their expertise further and performed yet another pontoon assisted launch with panache. Following the launch, ‘Taragiri’ will join its two sister ships at MDL for outfitting activities towards the run up for their delivery to Indian Navy.

Seven P17A Frigates are under various stages of construction at MDL and GRSE. Indigenous construction of complex frontline ships such as Stealth Frigates has catapulted the nation to a higher pedestal in the arena of shipbuilding. It provides additional benefits such as economic development, employment generation for Indian Shipyards, their sub-contractors and ancillary industry.

Speaking on the occasion, Vice Admiral Ajendra Bahadur Singh, FOC-IN-C, Western Naval Command praised the efforts of Mazagon Dock Shipbuilders Limited, Warship Design Bureau and other Naval Teams in realizing the nation’s quest for self-reliance with regard to warship building.  He added that ‘Taragiri’ will surely add to IN’s forte as and when it makes its way into the blue waters.

‘Taragiri’, named after a hill range in Himalayas located at Garhwal, is the fifth ship of Project 17A Frigates. These ships are advanced version of the P17 Frigates (Shivalik Class) with improved stealth features, state of the art weapons and sensors and platform management systems. ‘Taragiri’ is the reincarnation of erstwhile ‘Taragiri’, the Leander Class Anti-Submarine Warfare Frigate, which saw numerous challenging operations in its illustrious service to the nation spanning over three decades from 16 May 1980 to 27 Jun 2013. Under the P17A program, a total of seven ships, with 04 at MDL and 03 at GRSE are under construction. Four P17A Project ships (two each at MDL and GRSE) have been launched so far between 2019 and 2022.

P17A ships have been designed in-house by Indian Navy’s Warship Design Bureau which is the pioneer organization for all warship design activities of the Nation. Towing the line of the country’s unwavering efforts towards ‘AatmaNirbharata’, 75 per cent of the orders for equipment & system of Project 17A ships are being placed on indigenous firms including MSMEs.