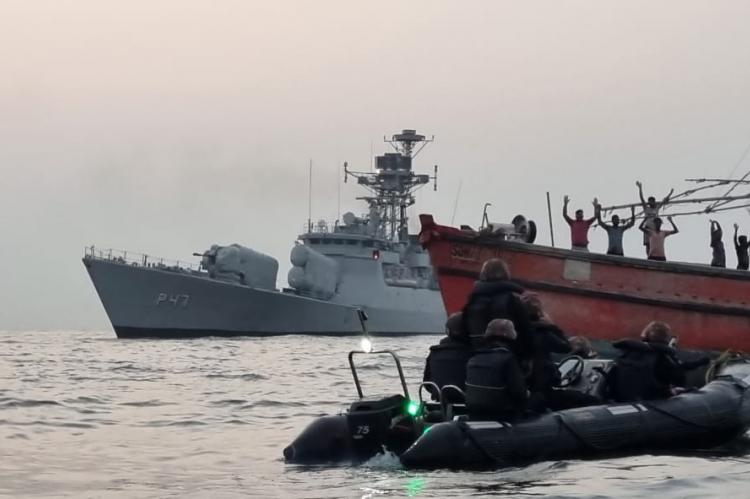 Exercise Sea Vigil-22, the two-day Coastal Defence exercise was conducted from 15-16 Nov 22. The conceptual and geographical expanse of Sea Vigil included contingencies ranging from Peace to War-time across the entire coastline and EEZ of the country. In addition, mitigation measures, on shore, in case of any breach in Coastal Security mechanism were also validated.

The exercise involved participation of more than 17 Government agencies from nine Coastal States and four Union Territories that are involved in the Coastal Defence Mechanism and Coastal Security construct. This edition of exercise Sea Vigil saw the largest participation from all maritime security agencies. More than 500 surface assets from the Indian Navy (IN), Coast Guard (CG), States Marine/ Coastal Police, Customs, Forest Department, Port Authorities and private operators participated in the exercise. The entire coastline was kept under surveillance by the IN and CG ships and aircraft. Helicopters were also pressed into service to reinforce Special Operations personnel operating onboard offshore platforms.

As ports form the nerve centre of sea borne trade, security mechanism of ports was also validated during the exercise and the crisis management plans of all ports were assessed for their effectiveness to tackle emergencies. The State Police teams, Indian Navy Marine Commandos and Commandos from National Security Guard were exercised to tackle acts of maritime terrorism.

In keeping with the Hon’ble Prime Minister’s vision of giving impetus to NCC, enthusiastic participation by more than 800 NCC cadets was witnessed all across the Coastal states and UTs. Participation of NCC cadets in an actual nation-wide exercise resulted in enhanced awareness and involvement amongst the cadets.

The exercise also validated the technical surveillance infrastructure called the National Command, Control, Communication and Intelligence (NC3I) Network. The Information Management and Analysis Centre (IMAC) at Gurugram and its various nodes across IN and CG stations were exercised for coordinating the surveillance and information dissemination mechanism.