The Raksha Mantri inspected the ongoing works at the Naval Base and received on-site briefings including capability demonstration at the Shiplift Tower. He also undertook a tour of the Naval Harbour and reviewed the marine works/infrastructure being developed as part of Project Seabird Phase II A as also operationalisation of Piers. Shri Rajnath Singh visited the newly-constructed Sailors Married Accommodation which incorporates advanced features for water efficiency, handling of house-hold waste, energy efficiency and provides environment-friendly houses.

Shri Rajnath Singh interacted with Project Seabird Contactors & Engineers and Officers, Sailors & Civilians of Karwar Naval Base. In his address, he expressed satisfaction at the progress of works being carried out under ‘Project Seabird’. He hoped that after the completion of the project, the Kawar Naval Base would become Asia's largest Naval base which would further bolster the operational readiness of the Armed Forces and help in augmenting trade, economy & humanitarian aid operations. 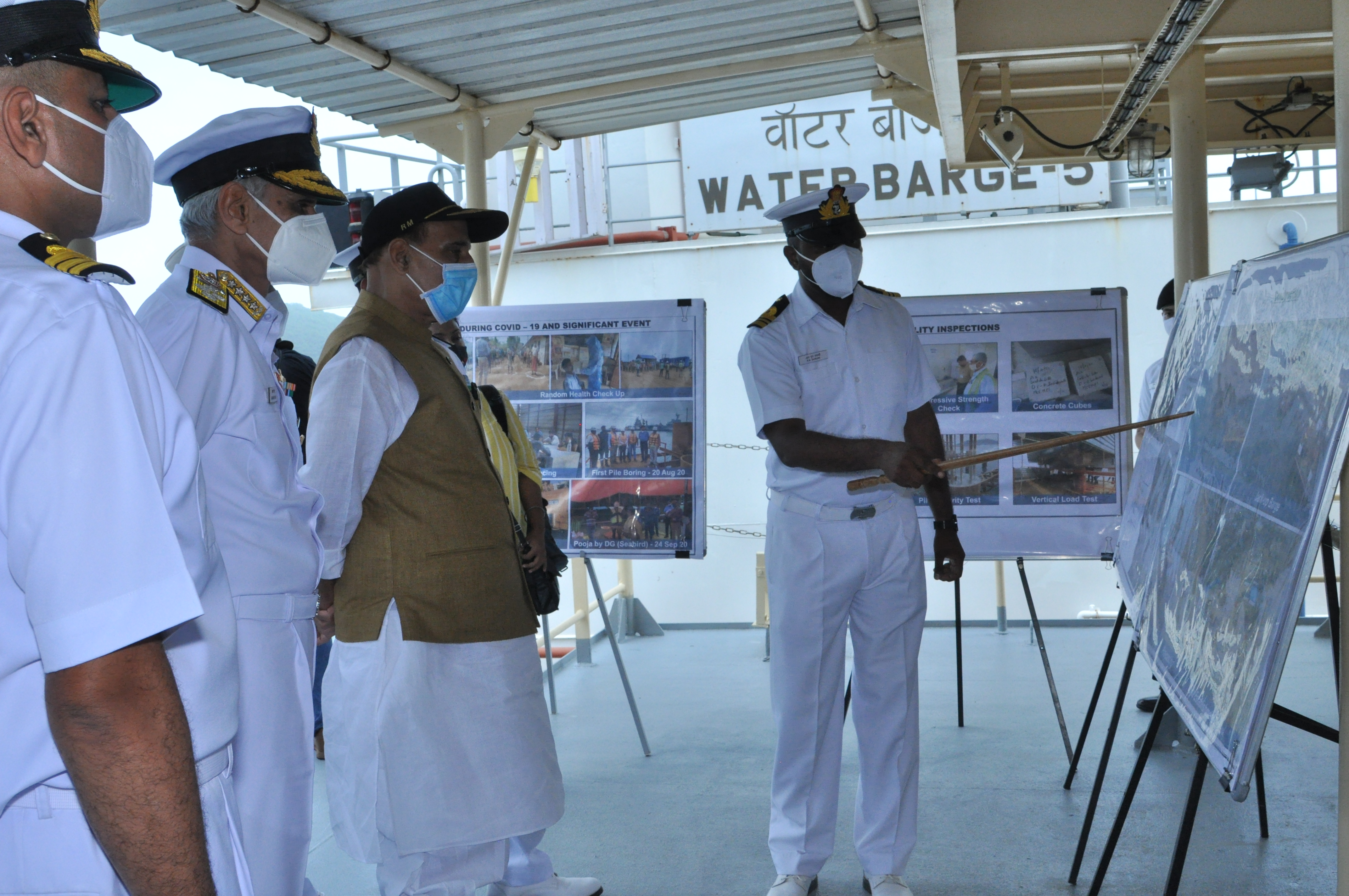 The Raksha Mantri complimented the Indian Navy for being a strong arm of the Armed Forces that is making an invaluable contribution towards maritime and national security, besides strengthening India's position at the strategic as well as diplomatic & commercial levels. He stated that the Navy is successfully discharging its duties of protecting the country, which through its coastline of more than 7,500 kms, about 1,300 islands and an exclusive economic zone of 2.5 million sq kms, is playing a crucial role in the development of the world. Shri Rajnath Singh added that the Navy is continuously strengthening India’s relations with its maritime neighbours with focus on 'SAGAR' (Security & Growth for All in Region) envisioned by Prime Minister Shri Narendra Modi. He also praised the role of Indian Navy during Goa Liberation War of 1961 and the 1971 Indo-Pak war among others.

Shri Rajnath Singh lauded the efforts of Indian Navy for providing humanitarian assistance to not just the country, but the world, especially during the COVID-19 pandemic. “From rescuing stranded Indian nationals from affected countries to ferrying in critical equipment, including oxygen cylinders, from abroad, Indian Navy has worked tirelessly in the fight against COVID-19. It also extended assistance to various countries,” he said.

The Raksha Mantri also highlighted some of the reforms undertaken by the Government to further strengthen the operational preparedness of the Armed Forces, including appointment of Chief of Defence Staff and setting up of Department of Military Affairs in Ministry of Defence. He also listed out a number of initiatives taken by the Government to promote self reliance in defence manufacturing. The initiatives include allocation of 64 per cent of modernisation funds under capital acquisition budget for 2021-22 for domestic procurement; changes in Defence Acquisition Procedure 2020 and increase in FDI limit in the defence sector to 74 per cent.

On the efforts to boost self reliance in Indian Navy, Shri Rajnath Singh said more than two-thirds of Navy's modernisation budget has been spent on indigenous procurement in the last five financial years. Lauding Navy’s commitment towards ‘AatmaNirbhar Bharat’, he stated that out of the 48 ships and submarines, 46 are being inducted through indigenous construction. The Raksha Mantri described Indigenous Aircraft Carrier Vikrant as a shining example of Navy's self-reliance efforts. He said the commissioning of Indigenous Aircraft Carrier Vikrant will be a momentous occasion in the history of Indian defence as it is coinciding with the 75th anniversary of India’s Independence. He expressed confidence that Indian Navy will become one of the top three Navies in the world in the coming years and continue to play a crucial role in protecting the nation.