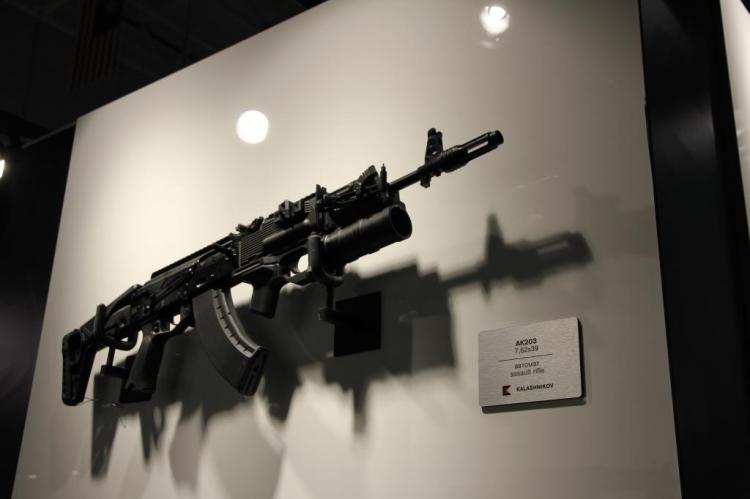 The wait for the locally-made AK-203 is over. The production of the gun has begun in the Korwa plant of the Indo-Russian Rifles Private Limited(IRRPL), a joint venture between Russia and India.

"Russia and India are linked by strong partnership relations. Military-technical cooperation between the two countries has resulted in the construction of the joint venture Indo-Russian Rifles Private Limited. With the launch of series production of Kalashnikov AK-203 assault rifles, high-quality, convenient and modern small arms will begin to enter service with India’s defense and law enforcement agencies. The model combines excellent ergonomics, adaptability to different shooters and high performance characteristics, it is one of the best assault rifles in the world," said Sergey Chemezov, General Director of Rostec.

Rostec is the parent company of Rosoboronexport and Kalashnikov Concern, the Russian partners of the IRRPL where Munition India and Advanced Weapons and Equipment India Limited represent India. As per the joint venture agreement, signed in 2019, now defunct Ordnance Factor Board(OFB) owned 50.5 percent of shares of IRRPL and Kalashnikov Concern owned 42 and rest by RoE.

The joint venture plans to ensure 100 per cent localization of the production of AK-203 rifles in India. In future, the company may also increase output and upgrade its production facilities to manufacture advanced rifles based on the Kalashnikov assault rifle platform.

"Korwa Ordnance Factory in Amethi, Uttar Pradesh, has produced the first batch of 7.62 mm Kalashnikov AK-203 assault rifles. The beginning of deliveries to the Indian Army is expected soon. At the same time, the factory’s capacity makes it possible to fully equip the personnel of other law enforcement agencies in India with AK-203 assault rifles, which, due to their high adaptability, are suitable for various operators. In addition, the joint venture will be able to export its products to third countries," said Alexander Mikheev, Director General of Rosoboronexport.

Indo-Russian Rifles Private Limited fully complies with the Government of India’s Made in India initiative and DAP 2020. Today, India is the first country to start producing the AK-200-series assault rifles of the world-famous brand.

The AK-200-series assault rifles have retained all the advantages of the traditional AK scheme: reliability, durability and ease of maintenance. At the same time, they fully meet the latest requirements for firearms in the world in terms of ergonomics and the ability to mount high-tech additional equipment.

Russia and India continue to implement military-technical cooperation projects. Their current and future programs are maximally focused on technological cooperation, including on the basis of joint ventures, in the format of licensed production and joint R&D projects. Rosoboronexport aims to cooperate on terms of transfer of technology put forward by the Indian side and in accordance with the Make in India initiative.