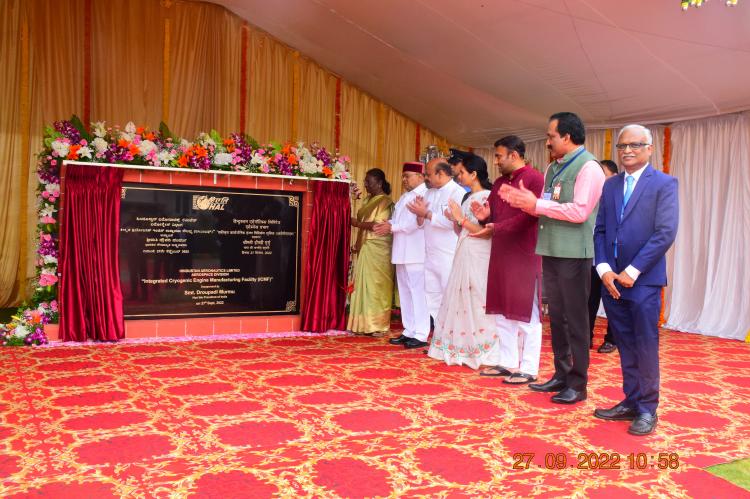 The President of India, Droupadi Murmu inaugurated HAL’s Integrated Cryogenic Engine Manufacturing Facility (ICMF) here today and said it is not only a historic moment for HAL and ISRO but for the whole of India. “India is the sixth country in the world to have Cryogenic Engine Manufacturing capabilities. The glorious past of HAL and ISRO gives us an assurance that they will play a crucial role in the future”, she said.

The President also went around the HAL facility.  She virtually laid the foundation stone for Zonal Institute of Virology (South Zone) of NIV, Bengaluru.  The Governor of Karnataka Mr. Thaawarchand Gehlot, the Chief Minister of Karnataka, Mr Basavaraj Bommai and others were present on the occasion.

Referring to Bengaluru as Space City, Mr. Bommai said the state contributed most of the space and defence related manufacturing activities in the country and Karnataka will continue to support the development of science and technology projects in the state to realise the ‘Aatmanirbhar Bharat’ vision.

Somanath S, Secretary, Dept of Space and Chairman of ISRO said India can emerge as a superpower in rocket technology only with the help of HAL which has shown ability to absorb complicated space technology with perfection.  ISRO therefore is confident that the entire rocket manufacturing will happen at HAL’s facility, he added.

HAL’s ICMF will cater to the entire Rocket Manufacturing and assembly under one roof for ISRO. The facility will boost self-reliance in manufacturing of High-thrust Rocket engines.

The facility is set up over an area of 4500 sqmts housing over 70 hi-tech equipment and testing facilities for manufacturing Cryogenic (CE20) and Semi-cryogenic Engines (SE2000) of Indian Space Launch Vehicles.

The commissioning of all the critical equipment for the manufacturing and assembly requirement is completed. The pre-production activities which involves preparation of the process plans, drawings, quality plan etc. has also commenced. HAL will start realising the modules by March 2023.