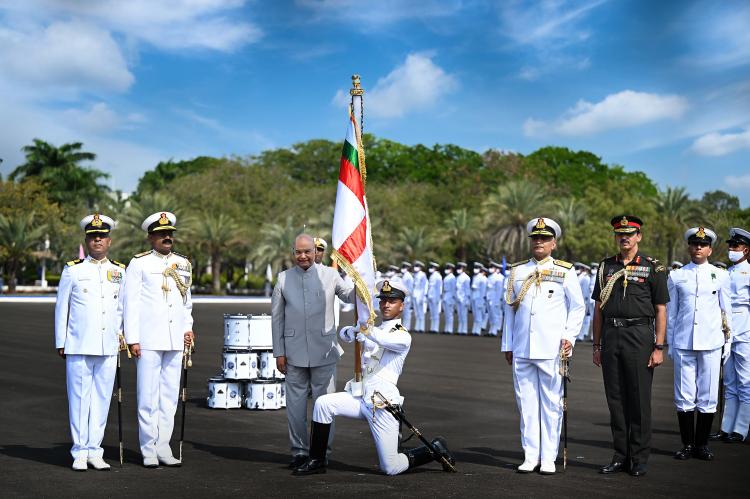 Ram Nath Kovind, the Hon’ble President of India presented the prestigious President’s Colour to INS Valsura on 25th Mar 2022.   The 'Nishan Adhikari'  Lt Arun Singh Sambyal received the President’s Colour on behalf of the unit, in an impressive parade.  The unit paraded a  150 men Guard of Honour for Hon’ble President of India.  Over 800 Officers and men of INS Valsura, looking spectacular in their ceremonial dresses, marched proudly to the tunes of the Naval Band.

The President’s Colour is bestowed upon a military unit in recognition of exceptional service rendered to the Nation, both in peace and in war.  The Indian Navy was the first Indian Armed Force, to be awarded the President Colour by Dr Rajendra Prasad on 27 May 1951.

The legacy of INS Valsura dates back to 1942, when the operational necessity mandated creation of an advanced Torpedo Training Facility to enhance the firepower of the Royal Indian Navy during World War-II.  Post India becoming a Republic, the unit was renamed as INS Valsura on 01 Jul 1950.  Thereon, INS Valsura has transformed itself into an epitome of professional technical training and has exponentially grown to keep pace with the Indian Navy’s modernisation plans.

The unit has always stayed ahead of the curve to equip the officers and sailors of the Indian Navy with requisite skill-sets to maintain and ensure combat worthiness of the increasingly complex weaponry and electronic systems besides keeping pace with the advancements in  Information Technology.  The unit imparts quality training on contemporary and niche technologies through progressive augmentation of training infrastructure. Setting up of Artificial Intelligence, Big Data and Medium Voltage labs in the recent years exemplify its quest for technological excellence in contemporary technology also in training officers and sailors. Overall, the establishment conducts more than 262 courses an year and has an annual training throughput of more than 750 officers and 4200 sailors. INS Valsura has also emerged as the preferred training destination for our Friendly Foreign  Navies. 1800 trainees from 15 Friendly Foreign Navies have been trained till date from this premier institution.

As part of social outreach programmes in the Saurashtra region, INS Valsura has initiated a number of welfare measures. The re-building of Navy Moda village post the devastating earthquake of 2001 was a commendable effort towards community service. In September 2021, during the floods in Jamnagar, over 400 citizens, including the elderly, ladies and children, were rescued by the teams of INS Valsura.

On this landmark event, the Hon’ble President of India congratulated the officers and sailors of INS Valsura and commended them for their professionalism and dedication to safeguard our maritime borders. He also congratulated the personnel of INS Valsura,  both past and present for the meritorious service rendered to the nation for the past 79 years. Speaking on this occasion, he lauded the sustained efforts by the unit, towards meeting the national objectives and producing competent sea warriors.

He further highlighted the vital role of the Indian Navy as the ‘Preferred Security Parter’ in the Indian Ocean Region and urged the men in whites to continue their selfless and dedicated service to the nation. The Hon’ble President wished all personnel of INS Valsura, encouraging  them to reach even greater heights in the era of rapidly changing technology.

A special postal cover was also released by the Hon’ble President to commemorate the occasion. The award of President’s Colour marks a very important milestone in the history of INS Valsura. The President’s Colour shall be proudly displayed and carried at all Ceremonial Parades at INS Valsura, in accordance with Naval traditions. It’s a symbol of yeoman service rendered and would motivate the  officers and men  of the Indian Navy.