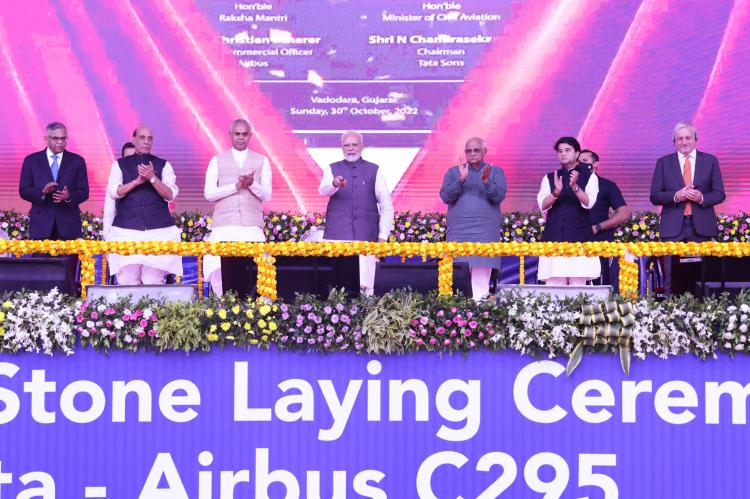 Prime Minister Narendra Modi, laid the foundation stone of the Final Assembly Line (FAL) for Tata Group’s India C295 Program at Vadodara, Gujarat. The unit will undertake aircraft manufacturing and assembly and will deliver a mission-ready aircraft in transport configuration, equipped with an indigenous Electronic Warfare Suite to the Indian Air Force (IAF).

This is the first project of its kind in which a military aircraft will be manufactured in India by a private company. The total cost of the project is Rs 21,935 crore. The aircraft can be used for civilian purposes as well.

Addressing the gathering, the Prime Minister said that today we have taken a big step in the direction of making India the manufacturing hub of the world. He said India is making fighter jets, tanks, submarines, medicines, vaccines, electronic gadgets, mobile phones and cars that are popular in many countries.

The Prime Minister added that the manufacturing facility has the power to transform the country’s defence and transport sector. He pointed out that it is for the first time that this big investment is taking place in the Indian Defence sector. Transport aircraft, manufactured at the facility, will not only strengthen the Armed Forces but also help in developing a new ecosystem of aircraft manufacturing “Vadodara, which is famous as a cultural and education centre, will develop a new identity as an aviation sector hub,” he said.  The Prime Minister expressed happiness about the fact that more than 100 MSMEs are also associated with the project. He said the promise of ‘Make in India, Make for the World’ will gain new push from this land as the project will be able to take orders for export to other countries in the future.

Commenting on the fast-evolving aviation sector of India, Modi said that we are about to enter among the top three countries in the world with regard to air traffic. UDAN scheme is helping in turning many commuters into air travellers, he said. Highlighting the increased demand for passenger and cargo aircraft, the Prime Minister stated that India will need more than 2000 aircraft in the next 15 years. The Prime Minister pointed out that today is a crucial step in this direction and India has already begun preparations for the same.

Throwing light on the reforms made by the government in the last eight years, the Prime Minister said India is creating an unprecedented environment for manufacturing in the country. He gave examples of creating a simplified corporate tax structure while making it globally competitive, opening up the 100 per cent FDI route, opening up defence and space sectors for the private companies, reforming 29 central labour laws into four codes, abolishing 33,000 compliances, and creation of the Goods and Service Tax by putting an end to a complex web of dozens of taxes. He said, “a new saga of economic reforms is being written in India today and the manufacturing sector is reaping the most benefits from this apart from the states.” 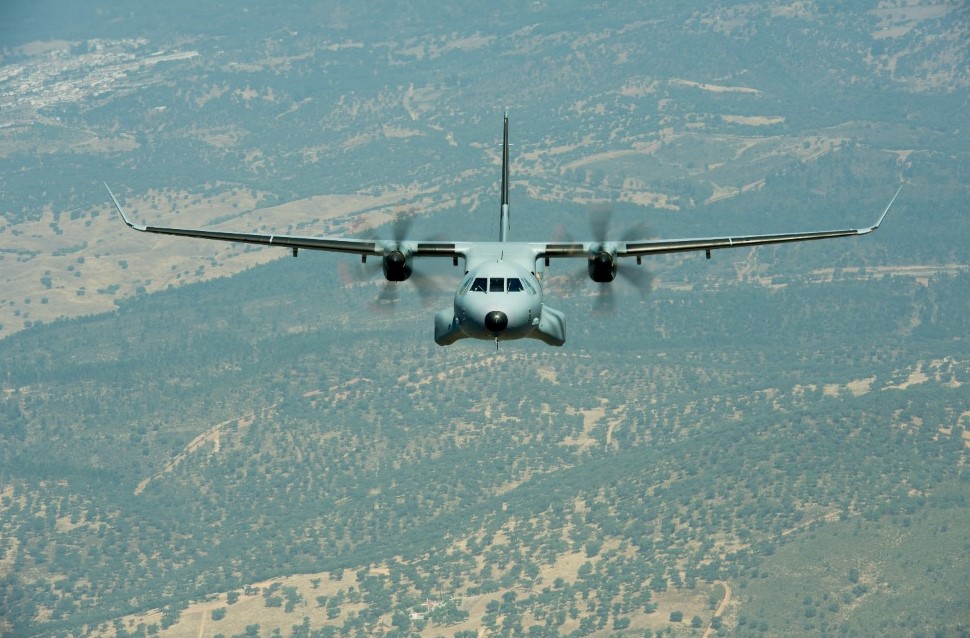 Narendra Modi credited a change in mindset for the success. He said, today India is working with a new mindset and a new work-culture. He recalled the time when the reigning notion was that the government was know-all, a mindset that suppressed the country's talent and the power of the private sector. Now following ‘Sabka Prayas’, the government has started giving equal importance to the public and private sector. The Prime Minister also lamented the makeshift approach of the previous government where the manufacturing sector was kept barely functional through subsidy. There was neglect of basic facilities like logistics, electricity supply or water supply. “We have abandoned the makeshift approach of decision making and have come up with various new incentives for investors. We launched the Production Linked Incentive scheme, which made the change visible. Today our policies are stable, predictable and futuristic,” he said.

The Prime Minister also recalled a time when the dominant thought was to focus on the service sector as manufacturing was considered to be beyond reach. “Today, we are improving both services and manufacturing sectors,” he said. He underlined the importance of a holistic approach that focuses on both the manufacturing and service sector. “Today India is preparing to stay ahead of everyone in manufacturing,” he added. “This became possible because in the last eight years we focused on skill development and created an environment for it. By assimilating all these changes, today India's development journey in the manufacturing sector has reached this stage,” the Prime Minister pointed out.

Highlighting the investment friendly policies of the government, the Prime Minister remarked that its benefits are clearly visible in FDI. In the last eight years, he said, companies from more than 160 countries have invested in India. He further elaborated that such foreign investments are not limited to certain industries but spreads across 61 sectors of the economy and covers 31 states of India. The Prime Minister informed that more than $3 billion has been invested in the aerospace sector alone. He noted that post 2014, investment in this sector grew five times of what was invested during the year 2000 to 2014. Narendra Modi highlighted that in the coming years, the defence and aerospace sectors are going to be the crucial pillars of the ‘Aatmanirbhar Bharat’ campaign. “We aim to scale our defence manufacturing beyond $25 billion by 2025. Our defence exports will also exceed $5 billion,” he added.

The Prime Minister pointed out that the defence corridors being developed in Uttar Pradesh and Tamil Nadu will immensely help in scaling-up this sector. He also praised Ministry of Defence and Government of Gujarat for organising the biggest-ever DefExpo in Gandhinagar recently. He underlined that all the equipment and technologies displayed in the DefExpo were made in India. “The reflection of Project C-295 will also be visible to us in the DefExpo of the coming years,” he added.

Concluding the address, Narendra Modi urged all those associated with the industry to make the most out of the unprecedented investment confidence in the country at the moment. He added that more thought must be given to helping the start-ups of the country in moving forward. The Prime Minister also stressed on increased participation of the private sector in the field of research. “If we push in this direction, we will be able to develop a stronger ecosystem of innovation and manufacturing. You always have to remember the mantra of Sabka Prayas,” the Prime Minister said.

In September 2021, India formalized the acquisition of 56 Airbus C295 aircraft to replace the Indian Air Force (IAF) legacy AVRO fleet. It is the first ‘Make in India’ aerospace programme in the private sector, involving the development of a complete industrial ecosystem: from manufacture to assembly, test and qualification, to delivery and maintenance of the complete lifecycle of the aircraft.

This will be the first time in the Indian private sector that an aircraft will be manufactured in-country, from parts to final assembly. The Program will lead to the development of a strong private industrial aerospace ecosystem in India and will create more than 15,000 skilled direct and indirect jobs across the aerospace eco-system, with more than 125 suppliers qualified on global quality standards across India.\

Speaking on the occasion of the laying of the foundation stone, N Chandrasekaran, Chairman, Tata Sons said, “With the set-up of the Final Assembly Line (FAL) in Vadodara, the Tata Group will now be able to take aluminum ingots at one end of the value stream and turn it into a Airbus C295 aircraft for the Indian Air Force. This is a historic moment not only for the Tata Group but for the country, as it embraces the Hon’ble Prime Minister’s vision of being truly ‘Atmanirbhar’”.

“We are honoured to play a role in this historic moment for aerospace in India. Our Airbus teams are committed to supporting the modernisation of the Indian Air Force with the C295 programme, which will also contribute to the development of the private defense manufacturing sector in the country,” said Guillaume Faury, Airbus Chief Executive Officer. “The C295 programme, in partnership with the trusted Tata Group, is strongly aligned with the Government of India’s vision of an ‘Atmanirbhar Bharat’ (self-reliant India)."

The IAF became the 35th C295 operator worldwide. Up to date the programme counts 285 orders, with more than 200 aircraft delivered, 38 operators from 34 countries as well as 17 repeated orders. In 2021 the C295 achieved more than half a million flight-hours.

With a proven capability of operating from short or unprepared airstrips, the C295 is used for tactical transport of up to 71 troops or 50 paratroopers, and for logistic operations to locations that are not accessible to current heavier aircraft. It can airdrop paratroops and loads and can also be used for casualty or medical evacuation. The aircraft can perform special missions as well as disaster response and maritime patrol duties.