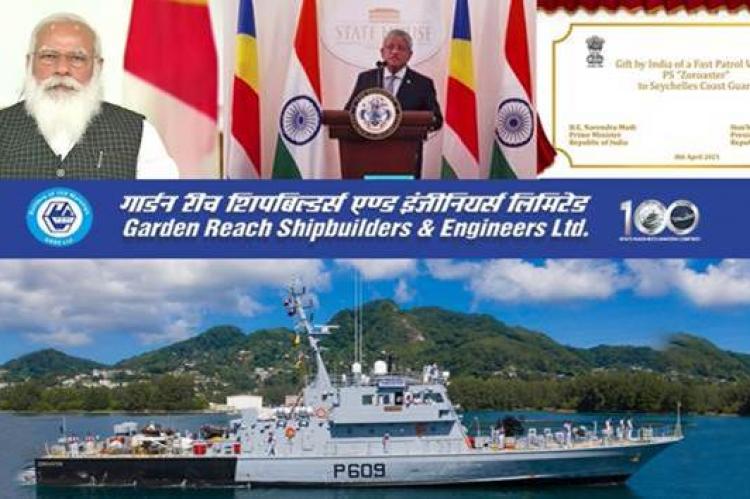 In line with India’s vision of ‘SAGAR’ (Security And Growth for All in the Region) that puts ‘Neighbourhood first’, Fast Patrol Vessel (FPV), SCG PS Zoroaster built by Garden Reach Shipbuilders and Engineers Limited (GRSE), Kolkata, a leading shipyard of India was handed over to the Seychelles Coast Guard by Hon’ble Prime Minister, Shri Narendra Modi in the presence of His Excellency Wavel Ramkalawan, President of the Republic of Seychelles. The handing over ceremony was conducted in virtual mode in presence of senior dignitaries of both countries.

Hon’ble Prime Minister of India Shri Narendra Modi in his address stated that India is committed to strengthening the maritime security of Seychelles and this new state-of-the-art ‘Made in India’ Fast Patrol Vessel will help Seychelles Coast Guard to protect its maritime resources.

President of Republic of Seychelles His Excellency Wavel Ramkalawan in his speech acknowledged that the donation of the Fast Patrol Vessel ‘Zoroaster’ by the Government of India comes at a certain opportune moment, reinforcing the efforts of the two nations to combat and deter maritime crimes with specific emphasis on counter narcotic operations within the vast expanse of the maritime zones of the two nations. He added that the state-of-the art vessel represents a key element in achieving this objective as well as enabling the Seychelles Coast Guard to fulfill its principle mission of defending the Seychelles territory, thus contributing to regional stability and security.

The SCG PS ‘Zoroaster’, is from the line of Fast Patrol Vessels being built by GRSE and with proven performance with the Indian Coast Guard. The ship is a powerful, fuel-efficient platform designed to perform multipurpose operations, such as patrolling, anti-smuggling, anti-poaching, and search and rescue (SAR). With a maximum speed of 34 knots and an endurance of more than 1500 nautical miles, this 50 m FPV with a waterjet propulsion system, advanced controls and a 40/60 gun as the main armament, has the capability to undertake Maritime Missions of the Seychelles Coast Guard. The vessel also has improved habitability features with fully air-conditioned modular accommodation for 35 personnel. The overall design of the FPV has been developed in-house by GRSE. The Shipbuilder shall also be supporting the ship at Seychelles for three years.

GRSE has also delivered CGS Barracuda, a multipurpose compact Offshore Patrol Vessel to Mauritius Coast Guard, thereby becoming the first Indian shipyard to have exported a warship in 2015. The Shipyard is presently undertaking the repairs and maintenance of the ship at Kolkata. GRSE has proven capabilities along with a dedicated building yard for Fast Patrol Vessels and Offshore Patrol Vessels. Recently, GRSE also bagged an order for construction & supply of 01 Ocean Going Passenger & Cargo Vessel for Republic of Guyana thus getting underway to becoming a global player in the warship building arena.

Since its inception as a Defence PSU in 1960, GRSE has built 788 platforms which include 107 warships to Maritime security forces, which is the highest number of warships built & delivered by any shipyard in the country, till date. GRSE has the capability to construct 20 ships concurrently, using its modernized infrastructure and ‘Modular Integrated Construction Philosophy’. Further, the dedicated, multi-disciplinary, in-house Design Team of the shipyard is continuously working towards developing various concept designs for ships that can cater to the current and future requirements of Indian Navy and Indian Coast Guard. GRSE has also been steering research and development for energy efficient technologies that can be inducted into service on India’s in-land waterways and also provide cost effective solutions to other nations.