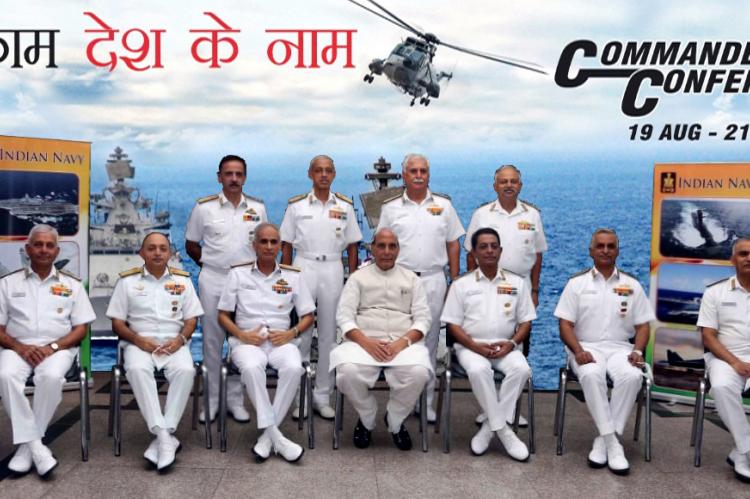 Raksha Mantri Shri Rajnath Singh addressed Naval Commanders on the inaugural day of the Naval Commanders’ Conference on 19 August 2020. He complimented the men and women of Indian Navy for their role in protecting the maritime interests of the nation and expressed confidence in the Indian Navy’s preparedness to meet any challenge through a proactive response in deploying its ships and aircraft.

Speaking on the unprecedented challenge posed by Covid-19 pandemic he congratulated the Indian Navy, on the conduct of the biggest ever repatriation operation "Operation Samudra Setu", which has contributed extensively to the national interest. Despite the difficult sea conditions and the challenges of dealing with an unseen enemy in the form of the Corona virus, the Navy was instrumental in bringing home almost 4000 people from neighbouring countries in the Indian Ocean Region (IOR). Also, under 'Mission Sagar', medical aid was provided to the countries of South West Indian Ocean Region (Maldives, Mauritius, Comoros, Seychelles and Madagascar). He also lauded the efforts of all Naval Commands in setting up of the quarantine facilities to aid the civil administration in managing Covid-19.

Shri Rajnath Singh said inspired by Prime Minister Shri Narendra Modi’s vision of SAGAR (Security And Growth for All in the Region), the Indian Navy has effectively carried out Mission Based Deployment to protect maritime interests by deploying naval ships and aircraft at major and sensitive locations. Since the commencement of Mission Based Deployment in June 2017, these deployments have facilitated enhanced Maritime Domain Awareness (MDA), provided swift Humanitarian Aid and Disaster Relief (HADR) to the Indian Ocean Region littorals and security to the international maritime community.

Speaking on the dynamic changes taking place in the armed forces, Raksha Mantri highlighted the creation of the post of CDS and Department of Military Affairs/MoD (DMA) as major milestones in bringing more synergy amongst the three services, especially in training, procurement and staffing and bringing jointness in operations.

Raksha Mantri said accepting the challenges arising out of the Covid 19 situation in the current financial year Indian Navy has continued to progress the operational, administrative and modernization efforts. Notwithstanding these fiscal challenges, the government has invoked the Emergency Powers to meet the emergent requirements of the services, he added.

Speaking on Indian Navy’s proven commitment towards ‘Atmanirbhar Bharat’ in consonance with the ‘Make in India’ initiative of the Government, Raksha Mantri appreciated that the Navy has been at the forefront of the indigenisation process. He also stated that it is important that we keep pace with the successes which have been achieved so far. The recently inaugurated NIIO (Naval Innovation and Indigenisation Organization) is one such step.

Wishing success to the Conference, Raskha Mantri expressed confidence that the key focus areas and strategies would be deliberated threadbare.

On arrival, Raksha Mantri was received by Admiral Karambir Singh, Chief of the Naval Staff and was briefed on the innovations carried out by Indian Navy in fighting the Covid-19 pandemic. These included various equipment developed/designed by the Navy, being effectively utilised by various agencies.