Integrated Finance is the backbone of any Ministry - Raksha Mantri 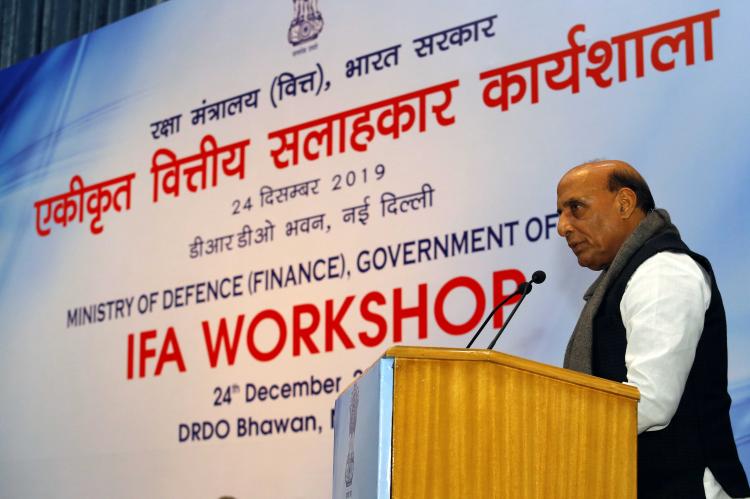 Raksha Mantri Shri Rajnath Singh has termed Integrated Finance as the backbone of any ministry/department, saying that desired objectives can only be achieved when a ministry/department is able to manage within its budgetary resources without compromising on operational needs. Addressing the Integrated Financial Advisors (IFA) Workshop here today, Raksha Mantri commended the Finance Division in the Ministry of Defence (MoD) and Controller General of Defence Accounts (CGDA) for meeting the needs of the three Services and other allied organisations, like Ordnance Factories, Indian Coast Guard, Border Roads Organisation and DRDO with harmony and synergy and displaying the willingness and readiness to meet new challenges.

Shri Rajnath Singh highlighted that in the last three years, MoD has been able to fully utilise its allocations, ending the trend of non-utilisation of funds due to substantial delegation of financial powers. He said, financial powers have been delegated for capital and revenue procurement so that Armed Forces are able to make their own procurement of up to Rs 300-500 crore. Raksha Mantri added that emergency powers have also been given to the Armed Forces in view of their emergent operational needs. This, he said, has led to enhanced operational efficiency.

Raksha Mantri stressed that workshops like these not only play an important role in the evaluation of the Government’s policies and practices but also create a path for future policies. “Such events instill confidence in how responsible and committed we are to our financial matters. These responsibilities and commitments help us to make our administration accountable and the country financially independent”, he said.

Shri Rajnath Singh said, the functioning of the Government is being made effective and efficient under ‘Minimum Government Maximum Governance’, adding that performance standards are being established for government officials and mechanisms of prudence and accountability are being adopted in financial management. He said, in such a situation, this workshop creates a progressive and constructive feedback system according to which a roadmap for systemic improvements is made. Raksha Mantri hoped that the workshop will evolve more efficient methods of using delegated financial powers and expressed confidence that IFAs will act as a facilitator and help in timely implementation of projects.

In his address, Defence Secretary Dr Ajay Kumar termed IFAs as ‘eyes and ears of MoD’ and said their defining role is to guide the Services and other allied organisations in their way forward. He called for increased focus on non-financial resources saying that they are equally essential. Dr Kumar said, optimisation and utilisation of resources should be at the centre of the functioning of IFAs.

Secretary (Defence Finance) Smt Gargi Kaul described financial advice as an important pillar of good governance and accountability. She said, the role of IFAs is to help the executive achieve its goals and objectives keeping in mind financial prudence. She urged them to take a macro view, saying that micro-routine matters should not be stressed.

Chief of the Army Staff General Bipin Rawat, Controller General of Defence Accounts Shri Sanjiv Mittal, Secretary (Defence Production) Shri Subhash Chandra and other senior military and civil officers of MoD were present on the occasion. Financial Advisors from various ministries/departments across the country are attending the day-long workshop.