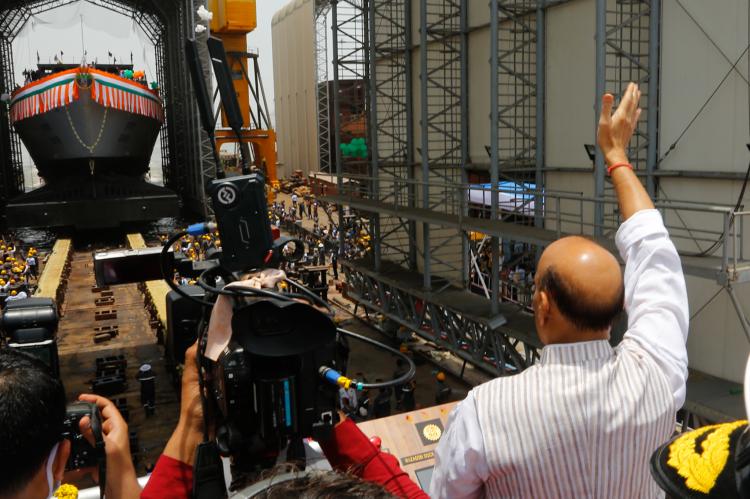 Raksha Mantri Rajnath Singh launched two frontline warships of the Indian Navy - INS Surat and INS Udaygiri - at Mazagon Docks Limited (MDL), Mumbai on May 17, 2022. INS Surat is the fourth Guided Missile Destroyer of P15B class, while INS Udaygiri is the second Stealth Frigate of P17A class. Both warships have been designed in-house by the Directorate of Naval Design (DND) and built at MDL, Mumbai. The Raksha Mantri, in his address, described the warships as an embodiment of the Government’s unwavering commitment to enhance the country’s maritime capability, with focus on achieving ‘Aatmanirbharta’, at a time when the world is witnessing disruption in global supply chain due to COVID-19 and the Russia-Ukraine conflict. He congratulated the MDL for continued ship production activities despite the pandemic and meeting the strategic requirements of the Indian Navy in the current geo-political scenario.

Rajnath Singh stated that the two warships will add might to the Indian Navy’s arsenal and represent to the world India’s strategic strength as well as the power of self-reliance. “INS Udaygiri and INS Surat are the shining examples of India’s growing indigenous capability. The warships will be among the most technologically advanced missile carriers in the world, that will cater to the present as well as future requirements. In the times to come, we will not only fulfil our own needs, but will also meet the shipbuilding requirements of the world. We will soon realise Prime Minister Narendra Modi’s vision of ‘Make in India, Make for the World’,” he said.

The Raksha Mantri lauded the Indian Navy for responsibly discharging its duties of keeping the Indo-Pacific region open, safe and secure. “The Indo-Pacific region is important for the economy of the whole world. India is a responsible maritime stakeholder in the region. We support consensus-based principles and peaceful, open, rule-based and stable maritime order. Being an important country in this region, it is the primary objective of our Navy to keep the Indo-Pacific open, safe and secure. The Prime Minister’s vision of Security and Growth for All in the Region (SAGAR) is based on the spirit of friendship, openness, dialogue and co-existence with the neighbours. With that very vision, Indian Navy is effectively discharging its duties,” he said. 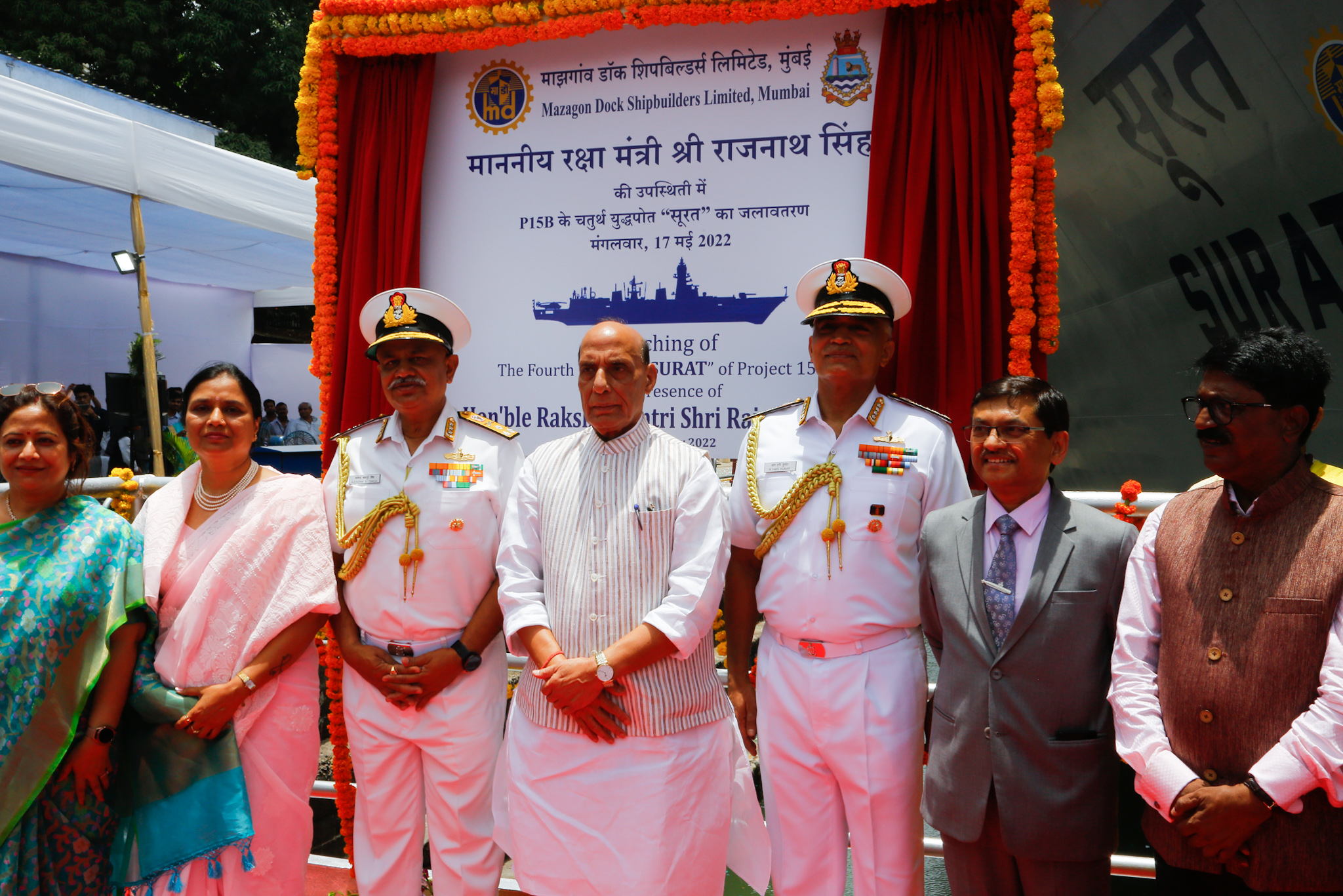 Rajnath Singh was of the view that the ever-evolving security scenario in the Indian Ocean and the Indo-Pacific region would demand an even more important role of the Indian Navy in the times to come. He called for devising policies which focus on bolstering the country’s presence in the region, its role during disasters, economic wellbeing and carrying forward the foreign policies.

The Raksha Mantri also praised the Indian Navy for playing a crucial role in carrying forward the Government’s policies such as Act-East, besides strengthening relations with Association of Southeast Asian Nations (ASEAN) and Bay of Bengal Initiative for Multi-Sectoral Technical and Economic Cooperation (BIMSTEC) countries. Recalling his recent visit to the Headquarters of United States Indo-Pacific Command (USINDOPACOM) in Hawaii, he said, they expressed their willingness to work with India, which symbolises the competence of the Indian Armed Forces; especially the commendable work being carried out by the Indian Navy.

“If a country wants to safeguard its national interests, it should project its military prowess in areas far beyond the mainland. If a country has aspirations to become a regional or global power, it is necessary to develop a strong Naval force. Government is making all efforts in this direction. We want to make a strong, secure and prosperous India, which is recognised as a global power,” said Rajnath Singh.

Asserting that global security, border disputes and maritime dominance have led nations around the world to modernise their military, the Raksha Mantri exhorted the public and the private sectors to make full use of the capabilities by taking advantage of the Government’s policies and contribute towards making India an indigenous shipbuilding hub. He assured of all possible support of the Government in this endeavour.

Rajnath Singh appreciated the fact that the Indian Navy has always been at the forefront in ensuring self-reliance through manufacturing of indigenous ships, submarines etc. “Joining hands with initiatives like ‘Make in India’, Navy has given 76% Acceptance of Necessity (AON), and 66% cost-basis contracts to Indian vendors in 2014 and indigenisation of about 90% Naval ammunition has taken place. In addition, more than two-thirds of the Navy’s Modernisation Budget has been spent on indigenous procurement in the last five financial years. Of the 41 ships and submarines ordered by the Navy, 39 are from Indian shipyards. This is a testament to the Navy's commitment to achieving 'Aatmanirbhar Bharat’,” he said, expressing confidence that the steps taken by the government to achieve self-reliance will give all support to their efforts.

The Raksha Mantri made special mention of Indigenous Aircraft Carrier ‘INS Vikrant’, terming it as a major milestone in the Indian Navy's path of ‘Aatmanirbharta’. He hoped that the carrier will increase India’s reach from the Indian Ocean to the Pacific and Atlantic Ocean. The commissioning of ‘INS Vikrant’ will be a golden moment in the Indian defence history, he said.

In keeping with the Naval traditions, President NWWA (Western Region) Charu Singh and spouse of CMD, MDL Jaishree Prasad blessed and named the ships ‘Surat’ and ‘Udaygiri’ respectively. Chief of Naval Staff Admiral R Hari Kumar & other senior officers from the Indian Navy and Ministry of Defence were among the dignitaries present on the occasion. 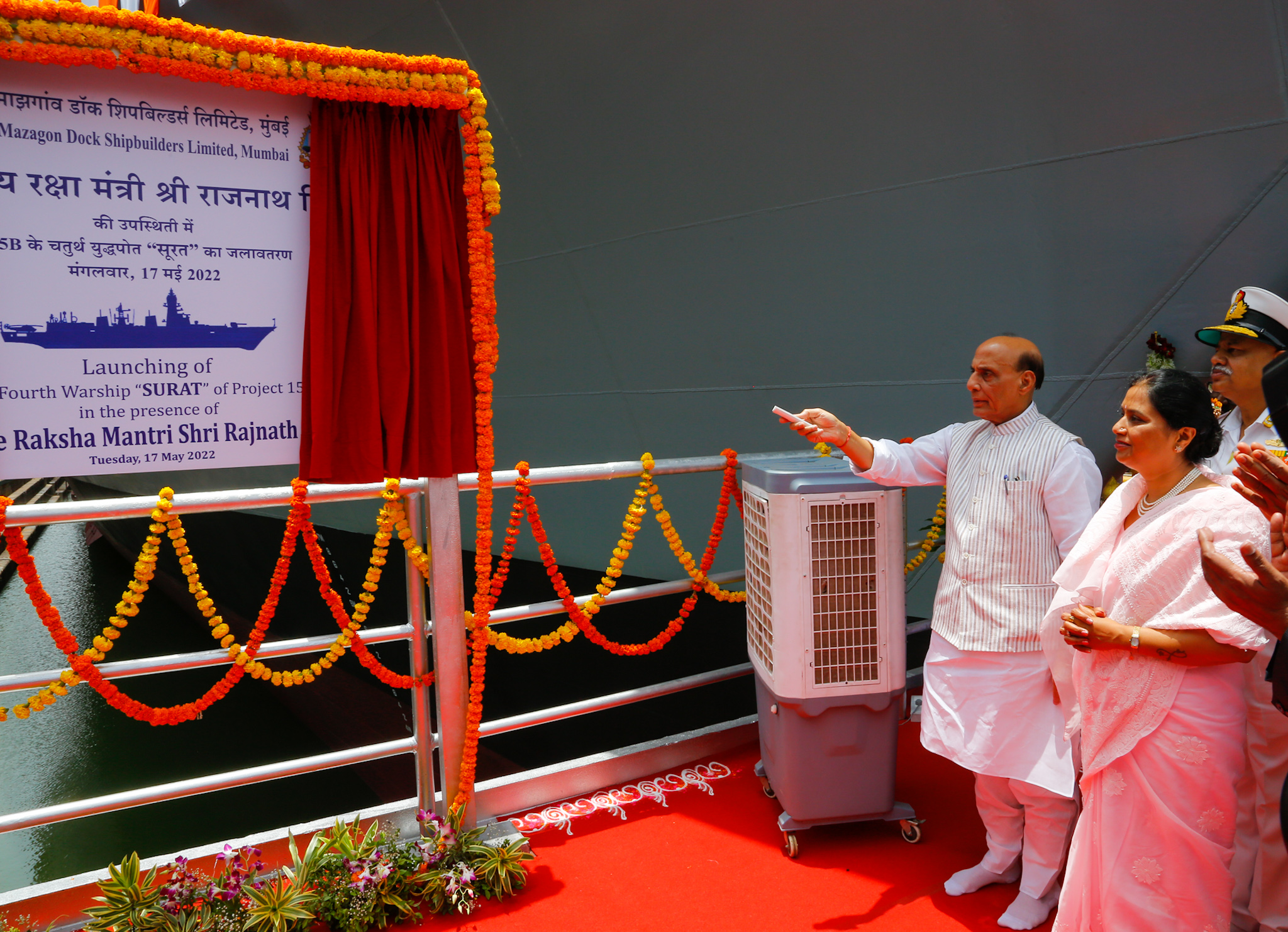 A precise evolution, the ‘Launching’ is carried out in tandem with the rising and receding tides. The DND and MDL teams have once again demonstrated their capabilities for designing and building quality warships. This launch also marks the commencement of the next phase involving extensive outfitting activities by the Shipyards readying these ships for delivery.

The Project 15B class of ships are the next-generation stealth guided-missile destroyers of the Indian Navy, being built at the MDL,which are follow-on class of the weapon intensive P15A (Kolkata Class) Destroyers. P17A Frigates are warships that are follow-on class of the P17 (Shivalik Class) Frigates with improved stealth features, advanced weapons &sensors and platform management systems. Seven P17A Frigates are under various stages of construction at MDL and Garden Reach Shipbuilders & Engineers (GRSE). Indigenous construction of complex frontline platforms such as Destroyers and Frigates is in line with the Government’s vision on ‘Aatmanirbhar Bharat’.