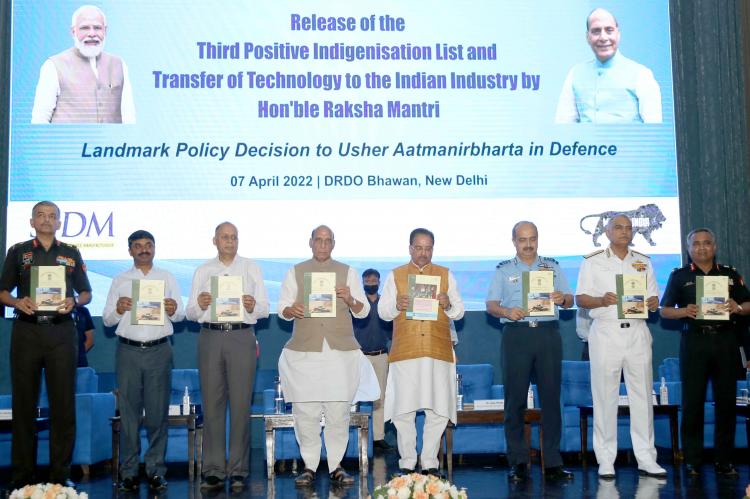 Defence Minister Rajnath Singh released the third positive indigenisation list of 101 items, comprising major equipment/platforms, in New Delhi on April 07, 2022. The list, notified by Department of Military Affairs, Ministry of Defence (MoD), lays special focus on equipment/systems, which are being developed and likely to translate into firm orders in next five years. These weapons and platforms are planned to be indigenised progressively with effect from December 2022 to December 2027. These 101 items will, henceforth, be procured from local sources as per provisions of Defence Acquisition Procedure (DAP) 2020.

Today’s development follows issue of first list (101) and second list (108) that were promulgated on August 21, 2020 and May 31, 2021 respectively. Import substitution of ammunition which is a recurring requirement has been given special emphasis. The spirit behind issuing these three lists comprising 310 defence equipment, slated to be manufactured locally, reflects the growing confidence of the Government in the capabilities of domestic industry that they can supply equipment of international standards to meet the demand of the Armed Forces. It is likely to stimulate the potential of indigenous Research & Development (R&D) by attracting fresh investment into technology and manufacturing capabilities. It will provide ample opportunities to the domestic industry for understanding the trends and future needs of the Armed Forces.

Addressing the audience on the occasion, the he described the third list as a symbol of 360-degree efforts being made by the Government to achieve Prime Minister Narendra Modi’s vision of ‘Aatmanirbhar Bharat’. He exuded confidence that this new list will prove to be crucial in the development of the domestic industry and take research & development and manufacturing capacity of the country to a higher level.

This third positive indigenisation list has been prepared after in-depth consultations with all stakeholders, such as Defence Research & Development Organisation (DRDO), Department of Defence Production (DDP), Service Headquarters (SHQs) and the private industry. Shri Rajnath Singh assured that, similar to the previous two lists, the time limit given in the third list will also be adhered to. He said, Ministry of Defence and the Service headquarters will take all necessary steps, including handholding of the industry, reiterating the Government’s endeavour to create an ecosystem that ensures self-reliance in defence manufacturing and encourages exports.

Congratulating DRDO and the Industry, Rajnath Singh said, the handing over of 30 ToT agreements to the Industry shows the increasing trust of Indian industries in DRDO-developed indigenous technologies. This will further strengthen the manufacturing eco-system in defence systems and platforms, he said, expressing hope that the private sector will make full use of the opportunities being given to them by the Government in order to make India a global defence manufacturing hub.

Listing out the measures taken by the Government to maximise the participation of the domestic industry, the Raksha Mantri said, 68 per cent of capital procurement budget has been earmarked for domestic procurement to promote self-reliance & reduce import dependency. The other measures include earmarking of 25 per cent of defence R&D budget for the industry, start-ups and academia and corporatisation of Ordnance Factory Board.

Rajnath Singh pointed out that despite hurdles, India has always performed exceptionally well, on its own, in areas such as nuclear technology and space technology, due to the grit and determination of its scientists & researchers. With the same resolve, India will soon transform into a global manufacturing hub that caters to the domestic requirements, besides being a dominant force in international market, he added. He described the three lists as a self-imposed vow which can pave the way for a strong and self-reliant ‘New India’. He underscored the importance of self-reliance in defence production and promotion in exports, terming it as a crucial aspect which strengthens the economy as well as national security, besides improving the socio-economic condition of the country.

The Raksha Mantri called for indigenous development of defence equipment and platform technologies, stressing that the import of systems, with foreign software codes, can prove to be dangerous for the security apparatus as it opens the window of vulnerability. Emphasising on the need to focus more on indigenisation, he said, “Today, the scope of defence is not limited to borders only. Anyone can now break into the security system of a country with the help of different communication methods. No matter how strong the system is, if it is linked to another country, there is a possibility of a security breach. Earlier, the defense equipment, such as tanks and helicopters, were mainly mechanical in nature. It was not possible to control them. But, newer defense systems and platforms are electronic and software intensive. They can be controlled or subverted from anywhere.”

Stressing on domestic production of ammunition as it ensures uninterrupted supply during wars, Shri Rajnath Singh appreciated the fact that full attention has been paid to the import substitution of ammunition in the first two positive indigenisation lists. He said, when orders for defence items are given to domestic defense industry, it provides employment to lakhs of people working in MSMEs connected to the sector, spread across the country.

The Defence Minister maintained that self-reliance does not mean to work in isolation from the rest of the world, but to work with their active participation within the country. “Even under ‘Aatmanirbhar Bharat Abhiyan’, we have provisions which provide suitable opportunities and environment to foreign companies to invest, collaborate, set up joint ventures and earn profit,” he said. The Minister reaffirmed the Government’s constant endeavor to create an environment where public, private sector and foreign entities can work together and help India to become one of the world's leading countries in defence manufacturing.

It may be recalled that Prime Minister Shri Narendra Modi had on February 25, 2022 during a post budget webinar ‘Aatmanirbharta in Defence: Call to Action’ appreciated the indigenisation efforts of MoD and announced that the third positive indigenisation list will be promulgated soon.

“The Indian Defence Industry has been galvanised by the path-breaking policy reforms introduced by the Ministry of Defence in recent years. The 3rd Positive Indigenisation List is another step in this direction and is warmly welcomed by the Industry. I thank the Hon’ble Raksha Mantri ji and Ministry of Defence for reposing this trust on the Indian Industry.”