First of the four ships under Survey Vessel (Large) Launched 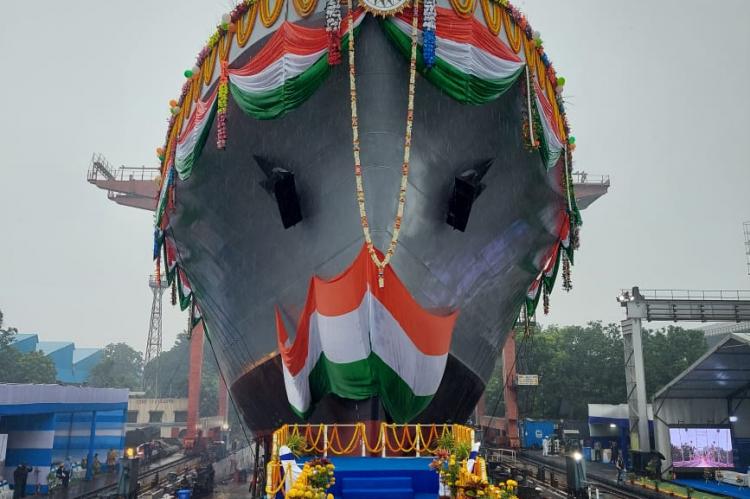 ‘Sandhayak’, the first of the four Survey Vessels (Large) project being built for the Indian Navy, was launched in Kolkata on December 05, 2021. These Vessels have been designed and developed by Defence Public Sector Undertaking, Garden Reach Shipbuilders and Engineers (GRSE) Limited, which is among the leading warship building companies in India. ‘Sandhayak’ made her first contact with the waters of Hooghly River at 1410 hrs at the Launch Ceremony graced by Shri Ajay Bhatt, Hon’ble Raksha Rajya Mantri. In keeping with the Naval maritime tradition, Smt Pushpa Bhatt, spouse of Shri Ajay Bhatt, launched the ship to the chanting of invocation from Atharva Veda. .

These survey ships are capable of full scale coastal & deep-water hydrographic survey of Ports & Harbour approaches and determination of navigational channels & routes. These ships are also capable of undertaking survey of maritime limits and collection of Oceanographic & Geographical data for Defence applications, thus boosting the maritime capabilities of the country. These ships are propelled by two Marine Diesel Engines combined with Fixed Pitch Propellers and fitted with Bow & Stern Thrusters for manoeuvring at low speeds during surveys. In their secondary role, these ships would be capable of performing roles such as Search & Rescue and Disaster Relief, besides serving as Hospital ship with limited facilities during emergencies. The ships will have a retractable Hangar for stowage of a Utility helicopter

The contract for building four survey ships was signed between MoD and GRSE on 30 Oct 18 at a total cost of Rs 2435 Crs. The ships are fully designed by the Design team of GRSE to meet the requirements of the Indian Navy and are being built utilising the concepts of ‘Integrated Construction’ and in compliance with applicable provisions and regulations of the Classification Society. It has over 80 per cent indigenous content by cost and this will also ensure that large scale defence production is executed by Indian manufacturing units, thereby generating employment and expertise within the country.

Appreciating GRSE’s efforts, the Raksha Rajya Mantri said, the launch of the ship reinforces the Government’s commitment of indigenous shipbuilding as part of Prime Minister Shri Narendra Modi's vision of ‘Make in India' and provides thrust to 'Aatmanirbhar Bharat’. He appreciated the fact that 37 warships and submarines for Indian Navy are currently under various stages of construction in different shipyards within the country. Shri Ajay Bhatt lauded the Indian Navy and GRSE for working together on number of projects of national importance such as Project 17A frigates and Anti-Submarine Warfare Shallow Water Crafts.

Saying that blue economy is one of the core dimensions of growth as per the Government’s vision of New India by 2030, Shri Ajay Bhatt expressed confidence that the vessel will be a major contributor towards meeting the initiatives and vision for sustainable development in the maritime domain. He hoped that ‘Sandhayak’ will ensure safe navigation of not just Indian ships, but of friendly foreign nations in the Indian Ocean Region. “This would help in strengthening our bilateral ties and in opening up & promoting trade opportunities for our nation in the long term,” he added.

As per build strategy adopted by GRSE, first ship is being built at GRSE Ltd and construction of balance three ships is envisaged at M/s L&T Shipbuilding, Kattupalli.

In his address, Chairman & Managing Director, GRSE Rear Admiral Vipin Kumar Saxena (Retd) said, the present survey ships are equipped with new generation hydrographic equipment and is testimony to the maturity of the country’s indigenous construction capability towards achieving self-reliance. He said, this achievement, despite challenges posed by the COVID-19 pandemic, is a testimony to the commitment and capability of the GRSE.

The erstwhile Sandhayak incidentally was also launched at GRSE, Kolkata 44 years ago on 06 Apr 1977.