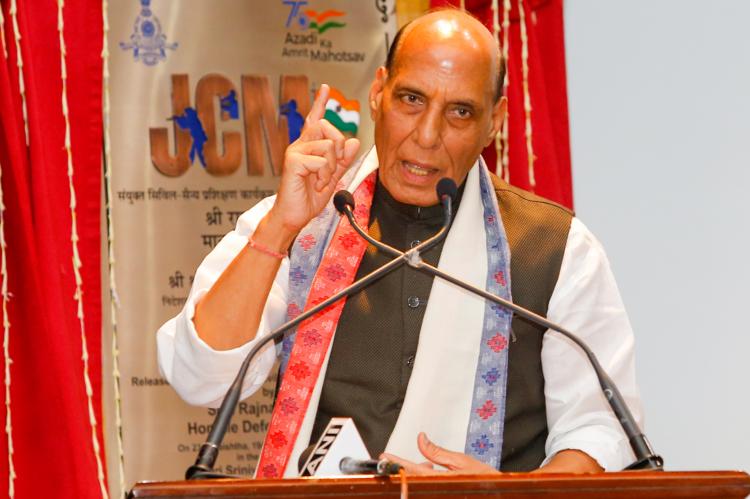 Rajnath Singh has called for greater jointness of civil administration and Armed Forces to further strengthen national security and deal with future challenges that may emanate from the ever-evolving global situation. He was addressing the participants of 28th Joint Civil-Military Training Programme at Lal Bahadur Shastri National Academy of Administration (LBSNAA) in Mussoorie, Uttarakhand on June 13, 2022. The Raksha Mantri pointed out that the concept of national security has broadened, as many non-military dimensions have been added to the more general aspect of protection from military attacks.

Rajnath Singh described the Russia-Ukraine situation and other similar conflicts as proof that the world is witnessing challenges far beyond conventional warfare. “War and peace are no longer two exclusive states, but a continuum. Even during peace, war continues on many fronts. A full-scale war is lethal to a country as much as it is for its enemies. Therefore, full scale wars have been avoided in the last few decades. They have been replaced by proxies and non-combat wars. Technology, supply line, information, energy, trade system, finance system etc. are being weaponised, which can be used as a weapon against us in the coming times. People’s cooperation is needed to deal with this widened scope of security challenges,” he said, while emphasising on the need to adopt ‘Whole of the Nation’ and ‘Whole of the Government’ approach to overcome these challenges.

The Raksha Mantri asserted that the full-fledged process of civil-military jointness has been started by the Government with the creation of the post of Chief of Defence Staff and establishment of Department of Military Affairs. He said, these decisions are proving to be helpful in making the country ready for future challenges. He added that the steps taken to modernise the Armed Forces and make the defence sector ‘Aatmanirbhar’ have started to yield results. Now, India is not only manufacturing equipment for its Armed Forces, but is meeting the needs of friendly countries as well, in line with the Prime Minister Shri Narendra Modi’s vision of ‘Make in India, Make for the World’, he said.

Shri Rajnath Singh was of the view that unless the silos of the civil administration and Armed Forces are broken to deal with hybrid threats, the nation cannot expect adequate preparedness to respond to future challenges. He, however, maintained that synergy does not mean infringing upon each other’s autonomy; it means working together while respecting one’s identity, like the colours in a rainbow.

“India is a peace-loving nation which does not want war. It has never attacked any country, nor has it captured an inch of anyone’s land. However, if anyone casts an evil eye on us, we will give a befitting reply,” said the Raksha Mantri.

Rajnath Singh exuded confidence that programmes such as the Joint Civil-Military Programme at LBSNAA will play a crucial role in the journey of civil-military integration, which has started under the present Government. He hoped that the programme will prove to be beneficial for civil servants and Armed Forces officers in developing an understanding of coordination and collaboration in the domain of national security.

The Raksha Mantri was of the view that after independence, India followed the old stream of governance and it led to the creation of various social, economic & political institutions and ministries/departments for the security and prosperity of the people. He added that while the division of work was necessary for the smooth functioning of a vast country like India, over a period of time departments and ministries started to work in silos.

Rajnath Singh stressed that the approach of working in silos has been changed by Prime Minister Narendra Modi who focusses on working with jointness. This new approach, with which the Government is now working, has ensured holistic development of the Nation, he stated.

Terming the service rendered to the nation by LBSNAA over the last several decades as unparalleled, the Raksha Mantri asserted that the institution, through its training, is nurturing the civil services officers, known as the steel frame of the country's system, and is contributing to the prosperity of the nation.

Rajnath Singh also paid glowing tributes to former Prime Minister Lal Bahadur Shastri who dedicated his life for the upliftment of the Nation. “Shastri ji had revered an idea of ‘unity’ and ‘oneness’ in the country. From public to administration, he believed in looking at work from the point of view of unity. This joint civil military programme, being conducted for the last two decades, is carrying forward that vision of Shastri ji,” he added.

The Joint Civil-Military Programme was initiated in 2001 with the aim of fostering structured interface between civil servants and Armed Forces officers for a shared understanding of national security. Participants are drawn from the Civil Services, Armed Forces and Central Armed Police Forces. The objective is to familiarise the participants with challenges to management of national security, emerging external and internal security environment and impact of globalisation; to provide an opportunity for the participants to interact and exchange ideas on the subject and expose them to the imperatives of civil-military synergy.