RM hands over DRDO Product & ToT to Services and Industry 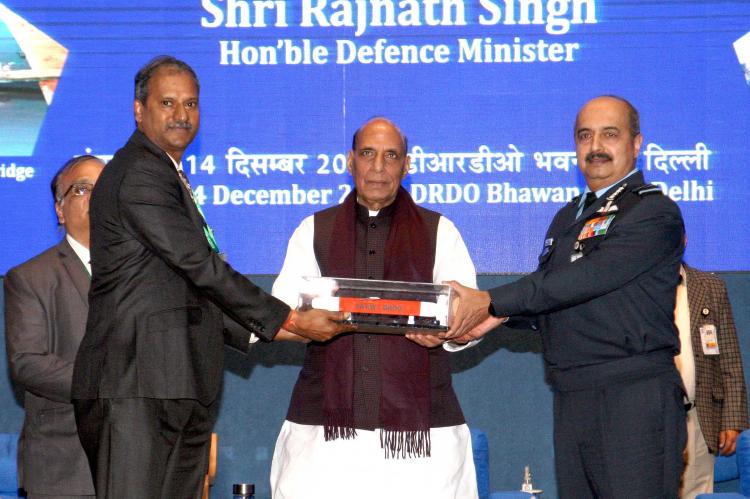 Raksha Mantri Shri Rajnath Singh handed over five Defence Research and Development Organisation (DRDO) developed products to the Armed forces and other security agencies at an event held at DRDO Bhawan, New Delhi on December 14, 2021, as part of Azadi Ka Amrit Mahotsav celebrations and iconic week of Ministry of Defence. He also handed over six Transfer of Technology (ToT) agreements to seven public and private sector companies. Earlier DRDO organised a Seminar on “Preparing For The Future” where Vice Chiefs of the Armed Forces and DRDO Scientists shared their views.

Speaking on the occasion, the Raksha Mantri said, such seminars help in meeting of the minds and evolving a common strategy to face enemy threats.

Shri Rajnath Singh said, “When we talk about integration and jointness, it is not limited to initiatives taken by government alone. Its success has to be achieved by meeting of minds of our defence forces. It is an effort to jointly enhance our capabilities to face the challenges posed by our adversaries.” “The integration we talk about, is not limited to our the forces but also it means synergy among every concerned organisation in the country,” he added.

He added that there has been a big change over the last few years in the approach of DRDO whereby it was not only working on technologies to mitigate current threats but also on first-of-its-kind technologies to face the future challenges.

On the objective of making India a strong platform of defence manufacturing base and net defence exporter, Raksha Mantri said DRDO has played a significant role in this endeavour. “Its path passes through collaboration among DRDO, the Armed Forces, Private industry, start-ups and academia. The ToT with private players which took place today indicate that we are ready to make a strong defence industrial base in the country that will cater not only the domestic defence requirements but also will fulfill needs of friendly countries by defence item exports.”

Paying tribute to late Chief of Defence Staff (CDS), General Bipin Rawat and others who lost their lives in an air crash recently, the Raksha Mantri said that the process of integration and modernisation of Tri-Services that was initiated with creation of post of CDS and Department of Military Affairs will move on seamlessly and will be priority of the government to achieve the target as soon as possible.

Emphasizing the role of technology in warfare, Shri Rajnath Singh said our aim should be to make India a leader in the defence technology and identified development of Hypersonic cruise missile as one such advanced technology for which all should work together.

Shri Rajnath Singh said the Government is working in a concerted manner to realize the objective of Make in India and Make for the World by bringing in several policy reforms such as increasing FDI in Defence sector through automatic route to 74%, Corporatisation of OFB, creation of defence corridors in Uttar Pradesh and Tamil Nadu, formulation of Defence Production and Export Promotion Policy 2020, bringing out positive lists of defence items for domestic manufacturing etc.  He added that these policies aim to make our Armed Forces strong by strengthening domestic defence industry.

Products handed over to the Armed Forces & Ministry of Home Affairs are Anti-Drone system, Modular Bridge, Smart Anti Airfield Weapon, Chaff Variants and the Light Weight Fire Fighting Suit. The counter drone systems, developed by DRDO for detection, deterrence and destruction of incoming drones was handed over to the CISC by the Raksha Mantri. He also handed over the Modular Bridge to the Chief of Army Staff General M M Naravane. Modular bridge developed by R&DE (Engineers) is a single span, mechanically launched assault bridge of military load class MLC-70, and can be launched in different spans.

Secretary, DDR&D and Chairman, DRDO Dr G Satheesh Reddy; Vice Chiefs of Army, Navy and Air Staff, other senior civil and military officials of Ministry of Defence and Home Affairs were also present on the occasion.