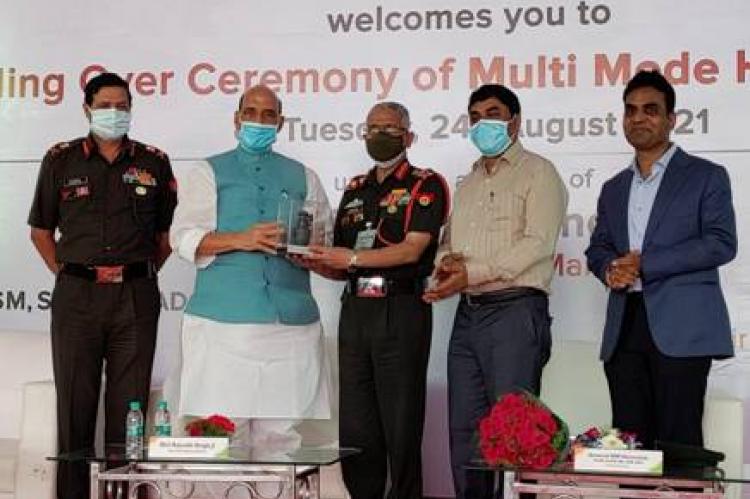 The first batch of Multi-Mode Hand Grenades (MMHG), manufactured by Economic Explosives Limited (EEL) following Transfer of Technology from Terminal Ballistics Research Laboratory of Defence Research & Development Organisation (DRDO), was handed over to the Indian Army in the presence of Raksha Mantri Shri Rajnath Singh in Nagpur, Maharashtra on August 24, 2021.

Chairman of EEL Shri S N Nuwal handed over a scale replica of MMHG to the Raksha Mantri to mark the first delivery of ammunition from the private sector. Chief of the Army Staff General M M Naravane, Secretary, Department of Defence R&D and Chairman DRDO Dr G Satheesh Reddy and DG Infantry Lt Gen A K Samantra were among those present on the occasion.

Addressing the gathering, Shri Rajnath Singh termed the handing over of MMHG as a shining example of the increasing collaboration between the public & private sectors and a big step towards self-reliance in defence manufacturing. “Today is a memorable day in the history of Indian defence sector. Our private industry is coming of age when it comes to defence production. It is an important milestone not only in the field of defence manufacturing, but also in achieving ‘AatmaNirbhar Bharat’ as envisioned by our Prime Minister Shri Narendra Modi,” he said. The Raksha Mantri lauded DRDO & EEL for the speedy delivery of the order amidst COVID-19 restrictions and hoped of a faster delivery of the next lot.

The Raksha Mantri listed out the measures undertaken by the Government to transform the defence sector into a self-reliant industry which can cater to the present and the future needs of the Armed Forces. These include setting up of Defence Industrial Corridors in Uttar Pradesh and Tamil Nadu; formulation of draft Defence Production and Export Promotion Policy (DPEPP) 2020; earmarking around 64 per cent of its modernisation funds under capital acquisition budget for 2021-22 for procurement from domestic companies; notifying two Positive Indigenisation Lists of over 200 defence items to promote self-reliance & defence exports; Corporatisation of Ordnance Factory Board (OFB); increasing FDI limit from 49 to 74 per cent under automatic route and beyond 74 per cent through government route and according top priority to 'Buy {Indian-IDDM (Indigenously Designed, Developed and Manufactured)}' category for capital procurement.

Shri Rajnath Singh made special mention of another initiative taken by the Government, i.e., Technology Transfer to Industries by DRDO. Describing the measure as the backbone of the defence industry, he lauded DRDO for being an incubator which is undertaking free of cost transfer of technologies as well as providing access to testing facilities and over 450 patents. This has not only enabled the Industry to use ready-to-use technologies, but has also saved time, energy and money, he said.

The Raksha Mantri also underlined the importance of Innovations for Defence Excellence (iDEX) saying that it aims to achieve self-reliance and foster innovation & technology development in defence and aerospace sectors by engaging Industries including MSMEs, start-ups, individual innovators, R&D institutes and academia. Under this initiative, the problems being faced by the Armed Forces, Defence Public Sector Undertakings and OFB are identified and brought before entrepreneurs, MSMEs, start-ups and innovators through Defence India Startup Challenge (DISC) to find solutions.

Shri Rajnath Singh commended the Industry for indigenously developing products like ‘Multi-Mode Grenade’, 'Arjun-Mark-1' tank, 'Unmanned Surface Vehicle' and 'See Through Armor'. “Such products are not just being produced but exported on a large scale. The number of online export authorisations during 2016-17 to 2018-19 was 1,210. It has increased to 1,774 in last two years. This has resulted in defence exports of over Rs 17,000 crore in the last two years,” he added. Shri Rajnath Singh exuded confidence that soon India will manufacture defence products not just for domestic use, but for the whole world.

The grenade is not just more lethal, but is safer to use. It has a distinctive design that gives flexibility of employment in both defensive (fragmentation) and offensive (stun) modes. It has a highly accurate delay time, very high reliability in usage and safe for carriage. These new grenades will replace Grenade No 36 of World War I vintage design, which had been continuing in service till date.

The EEL had signed a contract with Ministry of Defence on October 01, 2020 to supply 10 lakh modern hand grenades for Indian Army and Indian Air Force. The deliveries would be spread over two years from the bulk production clearance, which was accorded to EEL in March 2021. The first order has been delivered within five months.

The EEL had taken the technology from DRDO in 2016, absorbed it successfully while maintaining very high quality in detonics. Extensive trials were successfully undertaken by the Indian Army and Directorate General of Quality Assurance (DGQA) in 2017-18 in plains, deserts and high altitude over summer & winter.