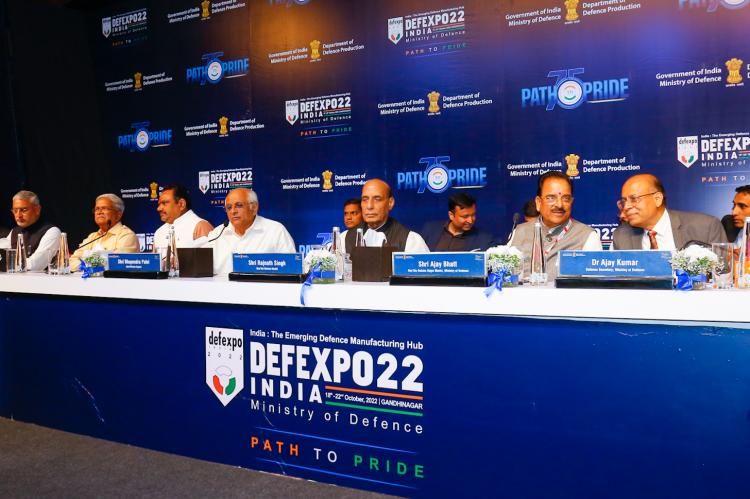 Gandhinagar, the capital of Gujarat, is all decked up to host India’s biggest-ever defence exhibition till date - DefExpo 2022 – between October 18-22, 2022. This 12th edition of the event has been organised on the theme ‘Path to Pride’. Prime Minister Narendra Modi will grace the inaugural ceremony on October 19.

Addressing the curtain raiser press conference in Gandhinagar on October 17, Defence Minister Rajnath Singh said, DefExpo 2022 will showcase the growing prowess of the domestic defence industry, which is one of the major drivers of the nation’s resolve to achieve ‘Make in India, Make for the World’ as envisioned by the Prime Minister. The biennial exhibition has been organised to support, showcase and forge partnerships for the Indian aerospace and defence manufacturing sectors with Indian as well as global customers to achieve the overall objective of catering to domestic requirements while fulfilling the needs of friendly foreign countries.

Rajnath Singh termed DefExpo 2022, exclusively for Indian companies, as a humble tribute of an ‘Aatmanirbhar Bharat’ to Father of the Nation Mahatma Gandhi, who was the pillar of the Swadeshi movement. “DefExpo 2022 during ‘Amrit Kaal’ reflects India's resolve to be among the leading nations in the defence & aerospace sectors in the next 25 years. Under the dynamic leadership of our Prime Minister Shri Narendra Modi, the defence sector has made giant strides on ‘Path to Pride‘ with passion and dedication to achieve the goal of ‘Aatmanirbharta’ in defence. We are swiftly moving towards becoming the pioneers in design, development and manufacturing at a global level. We are witnessing a transformational journey from being the largest defence importer to a net exporter. This DefExpo will further accelerate the pace of this journey,” he added.

He described 'Path to Pride' as not just a theme of DefExpo 2022, but a ‘Make in India, Make for the World’ vision of a ‘New India’. He called it a continuous process in which all the stakeholders - public and private sectors, MSMEs, academia, start-ups and Research & Development establishments – work together with the aim to provide innovative ideas and state-of-the-art products to the world.

Organised in the largest-ever total area of over one lakh sqm (previous edition being 76,000 sqm) and with record registration of 1,340 companies, DefExpo 2022 is set to be the biggest defence exhibition till date. For the first time, the event has been organised in a four-venue format. The inaugural ceremony and seminars will be held at Mahatma Mandir Convention and Exhibition Centre; Exhibition at Helipad Exhibition Centre; Live demonstrations at Sabarmati River Front and ship visits for public at Porbandar. The first three days (October 18 to 20) will be business days, while the last two days (October 21 & 22) have been reserved for public.

DefExpo 2022 will be the first-ever edition exclusively for Indian companies. Indian companies, Indian subsidiaries of Foreign OEMs, Division of company registered in India, Exhibitor having Joint Venture with an Indian company will be considered as Indian participants. The DefExpo 2022 will also mark the celebration of one year of the formation of the seven new defence companies, carved out of the erstwhile Ordnance Factory Board. All these companies will participate in DefExpo for the first time. 451 partnerships in terms of MoUs, Transfer of Technology agreements and product launches, almost double than the last edition, are expected during the Bandhan ceremony on October 20.

The India Pavilion - a marque pavilion of Department of Defence Production - will showcase the maturity of indigenous defence products, start-ups and latest technology, including Artificial Intelligence in defence, while presenting India’s vision for 2047. In addition, there will be an exclusive Innovations for Defence Excellence (iDEX) Pavilion to showcase the prowess of the country’s start-ups carrying out R&D and innovation in futuristic technologies.

For the first time, States/Union Territories (UTs) have been invited to set up pavilions at the event. The Raksha Mantri emphasised that with this new initiative, States/UTs will get an opportunity to participate in nation building by attracting investment and bolstering their potential of indigenous aerospace & defence manufacturing.

Seventy five (75) countries will be participating in DefExpo 2022. The Raksha Mantri will host the second India-Africa Defence Dialogue (IADD) on October 18, while the Indian Ocean Region plus (IOR+) conclave will take place on October 19. More than 53 African countries have been invited for IADD and 44 for IOR+ conclave. Several Defence Ministers from Africa and the IOR+ region have confirmed their participation.

Live demonstrations showcasing the equipment and skill set of the Armed Forces, DPSUs and Industry will be held on all five days at Sabarmati River Front through active participation and synchronised efforts at all levels. The demonstrations include Sarang Acrobatic display, search & rescue, combat free fall and paratrooper activities. Ship visits have been organised for public by Indian Navy and Indian Coast at Porbandar.

Another highlight of the event will be the biggest-ever drone-show by IIT Delhi start-up M/s Botlabs, which is an iDEX winner. Around 1,600 drones will light up the sky during the show on October 19, which will be a public event.

For the first time, ‘Invest for Defence’, the first ever marquee event of Ministry of Defence, targeted to promote investment in the defence sector in the country both by the Indian industry as well Foreign Original Equipment Manufacturers, will be held. It will be inaugurated by the Raksha Mantri on October 20. Shri Rajnath Singh stated that the event will be an important platform for eminent industrialists as they can contribute to the Government’s efforts towards development of the defence industrial ecosystem in the country and become a part of the ‘Make in India, Make for the World’ resolve. He added that the event will promote the growth of MSMEs and start-ups in the country so that they can become participants in the global supply chain and generate new employment opportunities.

Raksha Mantri Awards for Excellence in Defence Manufacturing is also being organised for the first time during DefExpo.

The seminars during the event will be held in a hybrid format, enabling the speakers as well as the audience to participate virtually. These will be streamed worldwide on the YouTube channel of Department of Defence Production. The seminars will be conducted by the leading Industry Associations, Think Tanks, Indian Defence Public Sector Entities, Service Headquarters (SHQs), Defence Research & Development Organisation (DRDO), Directorate General of Quality Assurance (DGQA), Ministry of Civil Aviation and State Government etc.

These seminars will broadly cover topics such as Exports, Financing and Investments in Defence Start-ups & MSMEs, Emerging role of MSME in Aerospace manufacturing & MRO, Aatmanirbharta in Defence R&D, Futuristic Autonomous Technologies for Air Dominance etc. Leading international and national experts from Defence and Aerospace sector are the speakers for various seminars. Shri Rajnath Singh stated that the seminars will be an important platform which will provide take-aways and action points for further development of the defence sector.