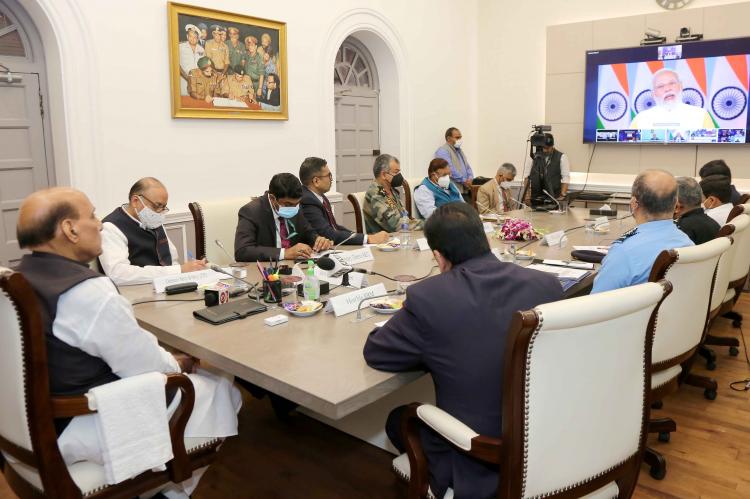 Ministry of Defence organised a post budget webinar titled ‘Aatmanirbharta in Defence - Call to Action’ on the announcements made in Union budget 2022-23, on February 25, 2022. The Union Budget 2022-23 related to Ministry of Defence has given further impetus to Aatmanirbharta in Defence and the objective of the webinar was to involve all the stakeholders in taking forward the various initiatives of the Government in the defence sector.

Prime Minister Shri Narendra Modi delivered the inaugural address of the webinar. He said, the theme of the webinar ‘Aatmanirbharta in Defence - Call to Action’ indicates the mood of the nation. The recent years’ effort to strengthen Aatmanirbharta in the defence sector is clearly visible in this year’s Budget. He recalled that India’s defence manufacturing was quite strong even during the period of slavery and in the immediate aftermath of independence. Indian made weapons played a major role during the Second World War. “Though, in the later years, this prowess of ours went into decline, still it shows that there has been no dearth of capabilities, neither then nor now”, he said.

The Prime Minister stressed the importance of customisation and uniqueness of the defence systems for having a surprise element over the adversaries. “Uniqueness and surprise elements can only happen when the equipment is developed in your own country”, he said. This year's budget, the Prime Minister mentioned, has a blueprint for developing a vibrant ecosystem from research, design and development to manufacturing within the country. About 70 percent of the defence budget has been kept for domestic industry only, he added.

The Defence Ministry has, so far, released Positive Indigenisation Lists of more than 200 defence Platforms and Equipments. After this announcement, the Prime Minister informed, contracts worth rupees 54 thousand crore have been signed for domestic procurement. Apart from this, the Prime Minister continued, procurement process of more than Rs 4.5 lakh crore worth of equipment is at various stages. Third list is expected soon, he said.

The Prime Minister lauded the ordnance factories for being a shining example of progress with determination. He expressed happiness that seven new defence undertakings that were incorporated last years are rapidly expanding their business and reaching new markets. “We have increased defence exports 6 times in the last 5-6 years. Today we are providing Made in India Defence Equipment and Services to more than 75 countries”, the Prime Minister added.

Raksha Mantri Shri Rajnath Singh delivered the valedictory address. He expressed his gratitude to the Prime Minister for his leadership and guidance in realising the goal of ‘Aatmanirbhar Bharat’ and infusing a new zeal in the workforce to achieve a ‘Shreshtha Bharat’. He hoped that the webinar will add momentum to the budget announcements and pave way for their speedy implementation. He thanked the participants for providing valuable inputs for strengthening the Government’s intent to make India a global defence manufacturing hub. He made a series of announcements to encourage the industry and the startups. These are as follows:

Identifying R&D and development of technologies as integral to achieving ‘Aatmanirbharta’ in defence, Shri Rajnath Singh called upon the Industry, R&D organisations, start-ups and academia to leverage each other’s capabilities for development of modern defence technologies and make India self-reliant in defence technologies as well. “In the annual budget of 2022-23, it has been announced that Defence R&D will be opened up for industry, startups and academia. 25 per cent of Defence R&D budget has also been earmarked for this purpose. I am happy to see that there has been extensive discussion during the webinar today,” he said.

The Raksha Mantri underscored the importance of adequate facilities and infrastructure for testing, trial & certification of indigenous products for the potential growth of the defence industry and creating a ‘Made in India’ brand as per international standards. For meeting these requirements, he said, the Government has decided to set up an autonomous Governing body to permit, regulate, promote, hand-hold, monitor and supervise Trial, Testing and Certification facilities and services offered by Ministry of Defence and its various organisations. Shri Rajnath Singh expressed satisfaction that the stakeholders openly discussed about the decision, which would guide the Government in finalising the contours of this body. He hoped that it will play a critical role in making the country self-reliant and a global manufacturing hub.

Shri Rajnath Singh also appreciated the fact that detailed deliberations were held on the Special Purpose Vehicle (SPV) model for undertaking indigenous R&D. He exuded confidence that many projects will soon be undertaken by the private industry for design & development of military platforms and equipment in collaboration with DRDO and other organisations through the SPV model.

The Raksha Mantri added that the Government’s commitment to reduce imports and modernise the Armed Forces with indigenous technology has been given further impetus in this budget. “We have been progressively increasing the capital procurement budget for the domestic industry, with 68 per cent of the capital procurement budget earmarked for 2022-23. I am sure that the domestic industry is fully capable to absorb this enhanced budget. I assure them that the Government will continue its pro industry policy initiatives for promoting Make in India with greater zeal,” he added. Shri Rajnath Singh urged the private industry, startups and academia to come forward to join hands with DRDO/DPSUs and other organisations of MoD to achieve greater heights in defence manufacturing and R&D.

The webinar had panel discussions with eminent speakers and experts from Ministry of Defence, defence industry, startups, academia, defence corridors etc., and interactive sessions with the stakeholders. The webinar comprised of breakout sessions on the following four themes:

The sessions were planned in a manner to allow for ample interaction with stakeholders, with a view to evolve a participative approach for time-bound implementation of the announcements.