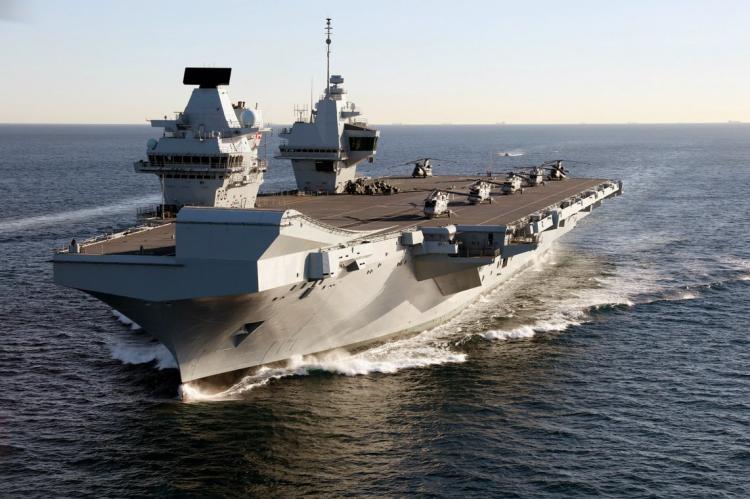 BAE Systems has successfully completed the management and delivery of planned overseas support for the UK’s Carrier Strike Group 21 (CSG21). The carrier group sailed from the UK in May and has been supported by BAE Systems throughout its deployment.

BAE Systems engineers and technicians have overseen the maintenance of aircraft carrier HMS Queen Elizabeth, Type 45 destroyers HMS Defender and HMS Diamond, and Type 23 frigates HMS Kent and HMS Richmond, in a number of countries along the route of CSG21.

As well as delivering maintenance support to the Royal Navy’s ships, BAE Systems also delivered specialised support to the ships’ combat systems and the fleet of F-35 aircraft on board HMS Queen Elizabeth.

Almost 100 engineers and technicians from BAE Systems and its partners have deployed across the world and on board the ships in order to deliver the support needed to keep CSG21 at sea.

Supporting a large and varied group of complex warships so far from their home port has required the close and careful coordination of multiple industry, Ministry of Defence (MOD), military and foreign government organisations, as well as expertise from across BAE Systems.

BAE Systems has managed one of the most critical elements of the operation: the virtual Class Output Management (COM) function, the cross-industry team responsible for overseeing and coordinating support for the entire strike group.

Experts from BAE Systems’ air division also worked closely with the F-35 pilots and aircraft on board HMS Queen Elizabeth to prepare them for the deployment, and delivered a synthetic training environment on the ship to allow UK Lightning Force and US Marine Corps pilots to quickly and easily refresh emergency procedure training and conduct mission rehearsals while at sea.

BAE Systems engineers have also supported the combat management systems, air traffic control system, and communications systems of all the Royal Navy ships throughout their deployment.  Integration services have been provided at the Maritime Integration and Support Centre (MISC) in Portsmouth, allowing systems to be tested together prior to, and during, deployment.

The primary objective of the support period was to enable the strike group to remain at sea by keeping the vessels in optimal working condition.

In early September, following careful planning and the dispatch of materials, BAE Systems led a team of highly qualified operatives – made up of 40 BAE Systems staff alongside a number of industry partners, equipment manufacturers, MOD and service personnel - to Guam in the Western Pacific, to deliver the final deployed support activities, working alongside local contractors and suppliers.

As well as extensive maintenance checks throughout the vessels, the team conducted a range of essential work, including scheduled maintenance of HMS Queen Elizabeth’s engines and aircraft lifts. Work was also carried out on the Type 23 frigates’ visual landing aids and the Type 45 destroyers’ gas turbines.

In addition to planned work, a team of 30 BAE Systems personnel had earlier joined HMS Diamond at short notice in the Mediterranean to address an emergent technical issue. The team was able to take advantage of this to address planned maintenance requirements ahead of schedule, minimising the number of days in port across the deployment.

“Delivering deployed support to CSG21 has been a complex and exciting project and one that we’ve been proud to lead,” commented Jon Pearson, Warship Support Director, BAE Systems. “We have spent months planning and forward-deploying resource and materials for CSG21 and have been responsible for liaising with everyone from suppliers to industry partners, the MOD and foreign base personnel. We’ve been flexible and agile in the face of shifting requirements, with the added complexity of the global pandemic. Our teams responded to these challenges admirably, drawing on our extensive subject matter expertise, partner network and global reach. We extend our thanks to our numerous industry partners and to the MOD and the foreign governments that made this project such a success.”