Need to create a self-reliant ammunition base - Rajnath 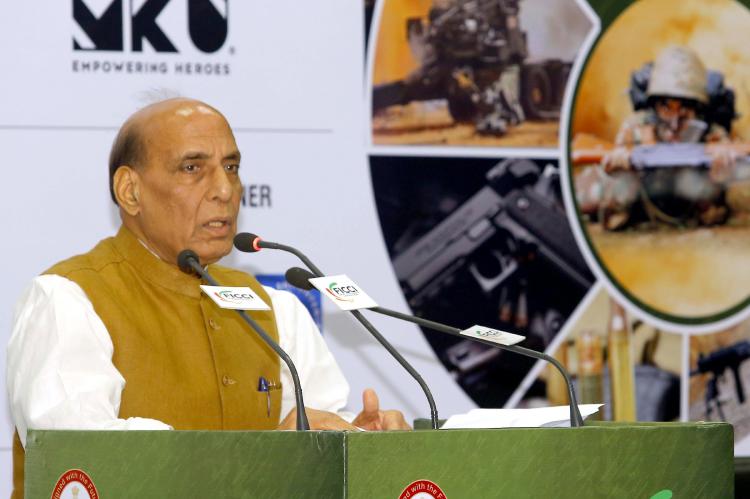 Defence Minister Rajnath Singh has called for innovations in the field of ammunition for the creation of a strong and self-reliant base that keeps the Armed Forces fully prepared to deal with future challenges. He was addressing the inaugural session of the second conference on Military Ammunition (Ammo India) on the theme ‘Make in India Opportunities and Challenges’ in New Delhi on July 27, 2022. The Minister described advanced ammunition as the reality of the new age warfare, which is a must for India, given its regional & global imperatives and security challenges.

“Scientific & technological as well as the economic development of a nation is reflected in the capacity of its weapons and ammunition. The development of ammunition is crucial not only for security, but also for socio-economic progress of the country. For India to become a world power and one of the leading countries in defence production, we must move forward in the indigenous design, development & production of ammunition,” he said.

Rajnath Singh asserted that the government understands the crucial role private sector can play in strengthening the defence sector and to enhance their participation in the field of ammunition, many barriers, which were earlier prevalent, have been removed. He said, from capping the participation of bidders, criteria of financial eligibility or the issue of credit ratings, the government has given considerable relaxation. He exhorted the public & private sectors, research & development establishments, start-ups, academia and individual innovators to explore newer avenues which can create a base that caters to the needs of the Armed Forces, ensuring their enhanced preparedness.

The Minister also emphasised the importance of precision guided ammunition, saying that it will play a major role in future warfare, equal to weapons/platforms due to its constantly-evolving nature. “The employment of precision guided ammunition at ‘Muntho Dhalo’ base played an important role in India’s victory in 1999 Kargil war. Precision strike of ammunition during 2019 strikes on terror camps in Balakot also ensured our success in the operation. Ammunition in modern battlefields is emerging in its new avatar, which once programmed can automatically take inputs, make course corrections and target the appropriate location at the right time. Earlier, only the size and explosive capacity of bombs mattered, but now their smartness is equally important,” he said.

Elaborating further on the advantages of a smart, precision and autonomous weapon system, Singh stated that it only targets desired areas. “If any enemy base is to be destroyed, then precision ammunition will selectively target it and not any civil establishments. This is not the case with traditional ammunition. Wars are fought with the country’s military, not with its people. Through precision ammunition, destruction of civil establishments can be avoided and the values of peace & humanity in times of war can be preserved,” he said.

Reiteratering the Government’s commitment to achieve ‘Aatmanirbharta in Defence’, he said that all efforts are being made to empower the domestic industry,which can equip the Armed Forces with home-grown world-class weapons/systems, crucial for bolstering national security. He pointed out that the three positive indigenisation lists notified by Ministry of Defence clearly indicate the Government’s emphasis towards indigenous manufacturing of ammunition. “Be it Guided Extended Range rockets for Pinaka, Advanced Light Weight Torpedo, Anti-Radiation Missiles or Loitering Munition, there are 43 such items in the third list. This reflects our commitment to achieve self-reliance in the field and indicates our confidence in the research, development and manufacturing prowess of the domestic defence industry. These lists of existing weapon systems and ammunition will encourage our industry to take up new challenges and ensure their progress,” he said.

Rajnath Singh appreciated the fact that six of the seven new defence companies, which were carved out of the erstwhile Ordnance Factory Board, have reported profit within six months of their inception. Munitions India Limited has received export orders worth Rs 500 crore, he said, terming the achievement as an indicator to the huge potential of the ammunition industry in the country.

The Minister listed out many other reforms taken by Ministry of Defence, including earmarking of 68 per cent of the capital acquisition budget for the domestic industry in 2022-23 and allocating 25 per cent of the domestic capital procurement budget for promotion of private industry, MSMEs and start-ups. He also shed light on the policy which allows DRDO-Industry Special Purpose Vehicle to develop essential advanced defence products. He added that the Government fully understands the role of MSMEs and start-ups in the defence sector, therefore, the scope of Defence Innovation Start-Up Challenges and Technology Development Fund has been expanded to create more opportunities for them.

Rajnath Singh maintained that while Ministry of Defence is focusing on achieving self-reliance, it is encouraging foreign original equipment manufacturers to invest, manufacture and export from India, in line with ‘Make in India, Make for the World’ vision of Prime Minister Shri Narendra Modi. “India ranks among the top 10 countries in the world in terms of military spending, which makes it one of the most attractive markets for defence. We believe in having a healthy mix of local endeavours and foreign collaboration in this journey of self-reliance. India is at the forefront of this effort in terms of educated manpower, lower development costs and consumption capacity. Our self-reliance is based on collaboration, coordination and partnership with global industries,” he said.

On the occasion, an exhibition showcasing products developed by the Indian Navy, DPSUs and the private sector was also inaugurated. He also released a ‘Knowledge Paper’ at the conference. Senior civil and military officials of Ministry of Defence and representatives from the industry, academia, start-ups as well as innovators were present.

The two-day conference, jointly organised by Federation of Indian Chambers of Commerce & Industry (FICCI) and Centre for Joint Warfare Studies (CENJOWS), will cover an extensive range of ammunition requirements of the Armed Forces. The conference comprises sessions on ammunition for tanks and armoured fighting vehicles; artillery including fuses; air defence, aerial munitions; munitions for precision attacks by drones & counter drone systems; naval munitions and ammunition for small arms; explosives and mines. It provides a unique platform to all stakeholders i.e. industry, users, DRDO and academia to meet and work towards achieving self-reliance in Ammunition manufacturing and moving towards ‘Aatmanirbhar’ in the defence sector.