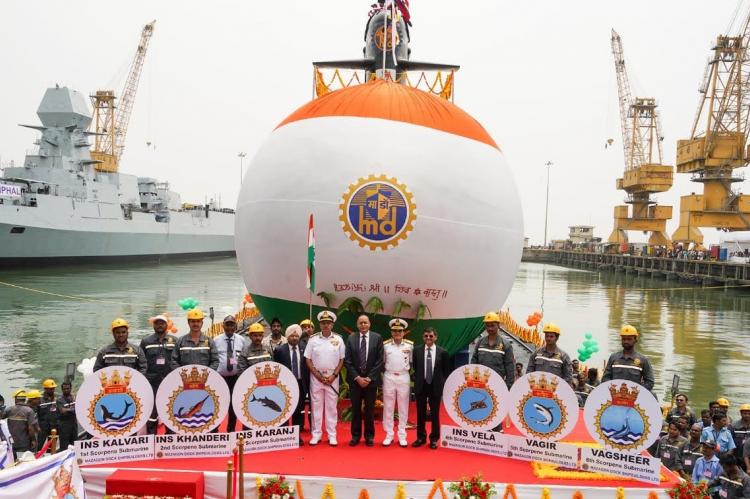 Vagsheer is the last of the six P75 Scorpene® submarine  entirely built by the Indian shipyard Mazagon Dock Shipbuilders Limited (MDL)  based on years of successful technology transfer and partnership with Naval  Group.

The first of the Project - 75 submarines was commissioned into the Navy in December 2017 and presently four submarines of this Project are in commission in the Indian Navy. The fifth submarine is progressing with the Sea Trials and is likely to be delivered this year. The sixth submarine will now commence setting to work of various equipment and their harbour trials. The crew will thereafter sail the submarine for the rigorous Sea Acceptance Trials after which the submarine would be delivered to the Indian Navy by late next year.

MDL teams will now have to complete the integration and setting to work of the  equipment and machinery onboard before beginning the sea trials, including weapon and sensor  trials.

The launching of Vagsheer highlights the success of the indigenous submarine construction  program of the Government of India. These submarines have been completely built by Mazagon  Dock Shipbuilders Limited (MDL) through a transfer of technology from Naval Group, in line with  Indian Government’s “Make in India” policy. The series of six submarines is fitted with a number  of equipment built in India by qualified and highly trained industrial Micro, Small and Medium  enterprises (MSMEs). MDL and Naval Group have developed a rich industrial ecosystem of more  than 50 Indian companies and their future projects are not limited to submarines, thus  contributing to industrial and technological sovereignty. These dedicated efforts resonate the  success of “Aatmanirbhar Bharat” vision of Prime Minister Modi.

Alain Guillou, EVP International Development at Naval Group said: “We are proud of this successful  cooperation with MDL and we stand by their side and are ready to assist for future projects. We  celebrate the success of “Make in India” while moving towards a true sense of “Atmanirbhar”  naval defence industry. The success of this program is collective and solely aimed at  strengthening the Indian Navy. We value our long-term relation and collaboration with India and  its navy and our teams are committed to keep on meeting their expectations.”

The Scorpene® is a 2000-tons conventional submarine designed by Naval Group for all types of  missions, such as anti-surface warfare, anti-submarine warfare, long-range strikes, special  operations or intelligence gathering. Extremely stealthy and fast, it has a level of operating  automation that allows a limited number of crew, which reduces its operating costs significantly.

Its combat edge is highlighted by the fact that it has 6 weapon launching tubes, 18 weapons  (torpedoes, missiles).

With 14 submarines sold around the world, the Scorpene® is a key reference of conventional  attack submarines (SSK) for navies around the world. It can be easily adapted to specific  requirements of customers and the continuous improvement of the Scorpene ensures the  seamless integration of the latest technology onboard.

Naval Group is present in India through its 100% subsidiary Naval Group India. Established in  September 2008, Naval Group India’s mission has been to support the indigenisation of equipment  for Scorpene® submarine, to develop the Indian defence eco-system, as well as to develop design  services in India with talented Indian engineers.

Naval Group India endeavours to be a visionary and to further its involvement in empowering  more industries by creating a robust eco-system that can cater to the varied defence needs of  the country.