Every nation will need to comprehend, construct, operate and evolve in the upcoming decade (years 2021-2030) where the multi-polar world that is rapidly emerging will transform the current peace-war plex into a chaotic, uncertain and explosive soup. We explain below the paths that are visible and how these may evolve to superposition of peace and war states in physical, phygital and emerging quantum cyberspace.

Not long-ago war and peace used to be clearly separable states of the world. One could always distinguish when two nations or two actors or group of actors are at peace with each other and when they are at war. Ideology, politics and economics were the operational constructs of state of peace and evolutionary and designed mechanisms of the state and different actors. Some actors, nations, regions, utilized overt and covert narratives to stitch together their strategies and operations in the conflict and cooperation games played in the peace state. Sometimes these conflicts transitioned to a state where military means became the key instruments for resolution of conflict. That transitioned state was termed war. The distinctions between state of war and peace were not only clear, but were accepted as such (See Fig. 1). 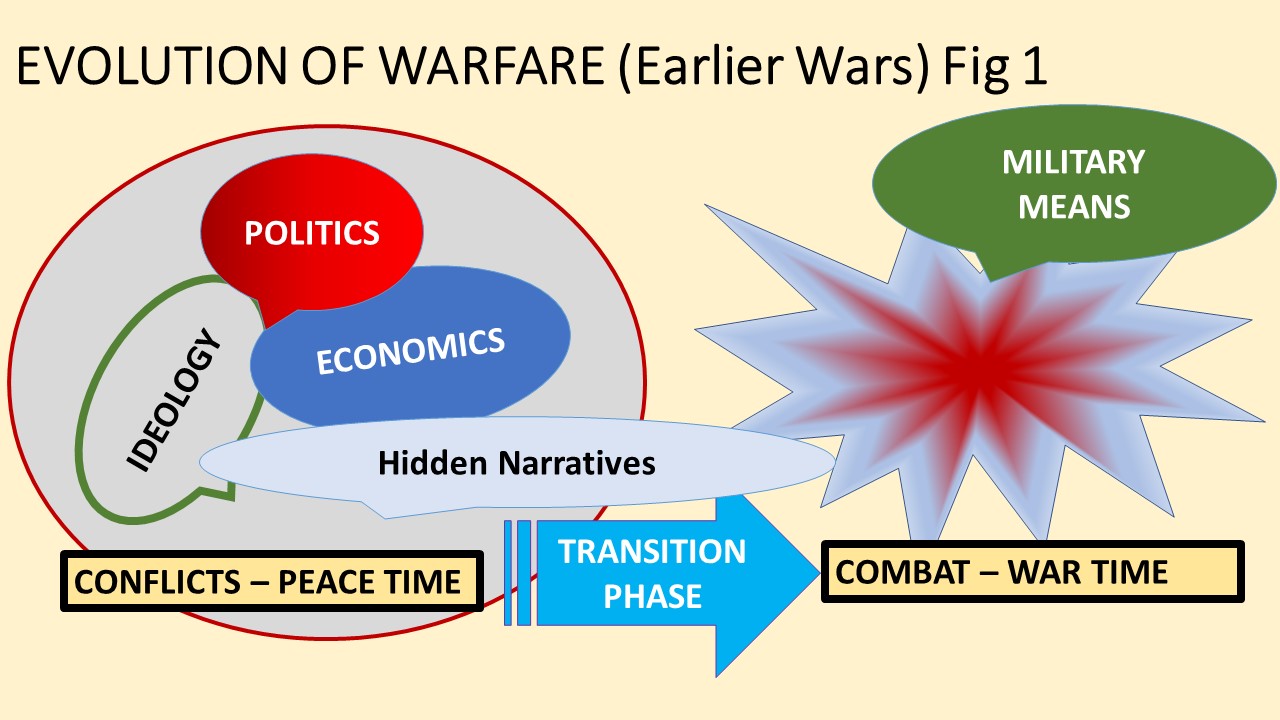 During the US-USSR cold war decades 1950-1980’s the boundaries between war and peace started blurring. Nuclear weapons of superpowers ensured that they will never be able to transition into a direct war state with each other, lest the nukes are unleashed on each other. However, it never stopped them in executing their wars through surrogates and various client states. The cold in the “cold-war” was more about the two superpowers not directly heating up into direct military actions. However, they kept the war-temperature of the world high – the control of communism and fight against capitalism were ideological constructs utilized as narratives to work out the peace and war transitions during cold-war, albeit between surrogate or client states of two superpowers.

With the demise of USSR and emergence of a Uni-polar world defined in 1991 through demolition of Iraqi defenses by US and allied forces airland battle doctrine using precision technologies with unprecedented effects, shocked other powers into rethinking their instruments of wielding state power. By 1999, China produced a template of “unrestricted warfare” and by 2006 Russia was exercising the asymmetric and hybrid warfare which US high-tech military could not respond to as also the 2010’s A2AD (anti-access area-denial) by China. The state of war as the world knew as a distinct one from peace has blurred (See Fig 2). 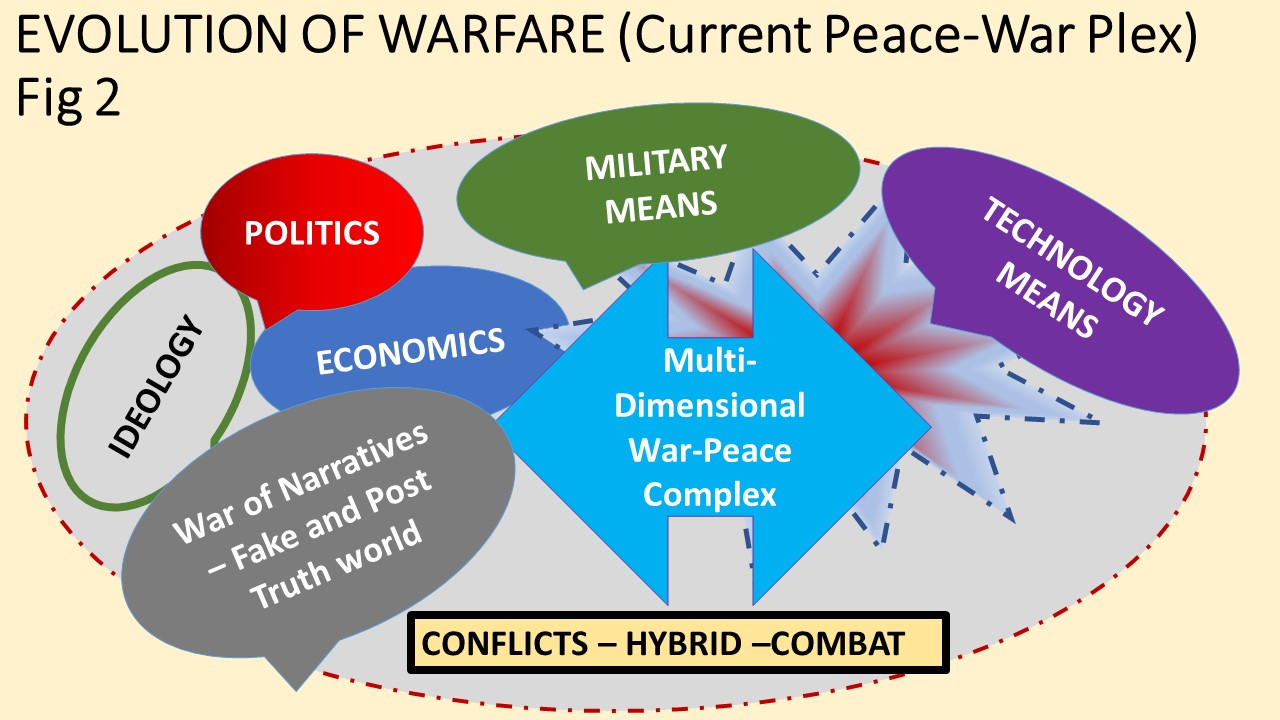 Emergence and Evolution of Non-Military Means of Peace-War Plexus

Military is not the only means, there are as many means for war and winning conflicts in peace (rather exercise of political will to forcefully re-orient the adversary to your way) as one can imagine or design. Weaponization of everything has built a multi-dimensional universe of war and peace complex that entangles the world into superposition of war and peace – each state shows up from time to time in different spheres, domains, dimensions and parts of the world. The peace-war plex has become truly entangled today in physical and phygital spaces. The conflicts and wars are being conducted through narratives that are being designed and thrown-in as the battles of “peace-war plex” through fake news and post truth constructs, enabled by technology means, to subjugate citizens of any adversary that one need to target. Weaponization can be through cunning media and story-saying that nudges people into and builds synthetic reality, influencing and surfacing collective uprisings and cleavages in the population. 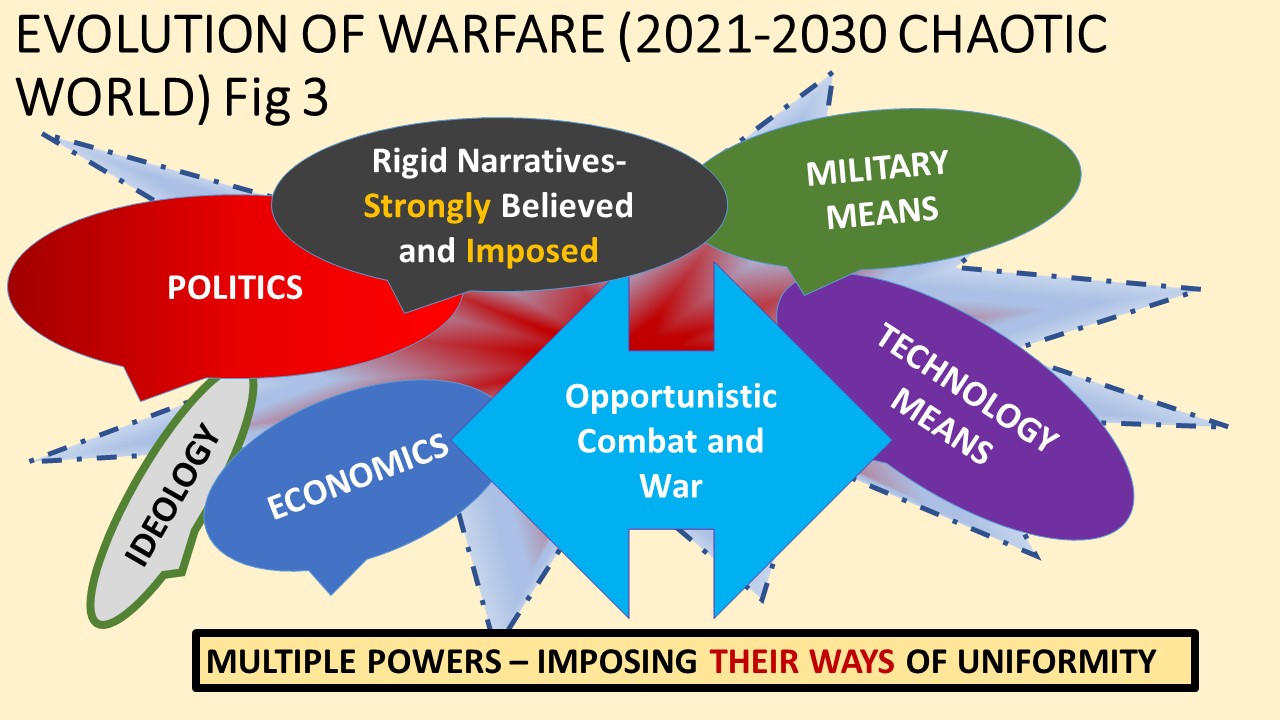 If the current peace-war plex is confounding for most, the next stage promises to be an extraordinarily disrupted world. In the synthetic reality that we have built or are building, the strong narratives will be delivered through multi resolution algorithms to impose pre-defined narratives to not only influence but impose and control behaviors that can potentially weaken or weaponize with different levels of resolutions in real-time. Through synthesis of reality (virtual, augmented, hybrid, fake-reality), biology and energy (as we described in the previous article [[i]]), war and combat will become opportunistic. Various powers will be playing and keeping their narratives ready in the form of evolutionary algorithms in the things that are nano, networked, autonomous and hypersonic through algorithmic intelligence and quantum computing. Influence and Imposition will have high fidelity provided by technology means – an individual can be weaponized through 360-degree technology-caging of his/her reality. It is a worrisome future indeed.

Warfare and military organizational structures have been evolving through these changes though they continue to lag behind in clearly defining and developing their role(s) in the evolving peace-war plex. Military is designed to defeat an enemy by eliminating or destroying their assets for creating violence or removing the leadership through violence. When weaponization is orchestrated through the infrastructure which is in fact a means for economic, social or political value creation, the military forces typically fail to design appropriate counter measures for such dual-role structures that can be weaponized.

As the Military learns and adapts to this peace-war complex with newer technologies of the sixth wave of innovation, the future national security or to be more appropriate the national power force of any nation will evolve to two clear components – one will be manned and other unmanned. These manned and unmanned components will be teamed through different algorithmic constructs and linkages to enable them to achieve desired results that the commanders or controllers may need or desire.  The manned unmanned teaming (MUM-T) will evolve in multitudes of explorations utilization of nano, networked, automated and hypersonic things through algorithmic intelligence and later quantum computing. The military force of 1980’s (as shown in Fig 4A) transformed to the network centric or C4ISR+Combat force of today (Fig 4B) is already giving way to a raw version of C5ISR or C6ISR military force.

The emerging military or rather national power force will comprise elements of cyber, space, electro-magnetic, and all military domains and dimensions which should be part of a National Power Organization (NPO). The NPO will define the effects desired and integrated force structures comprising manned and unmanned C5ISR units utilizing appropriate MUM-T will follow constructs or execute operations to achieve the desired effects. This is as shown in (Fig 4C). 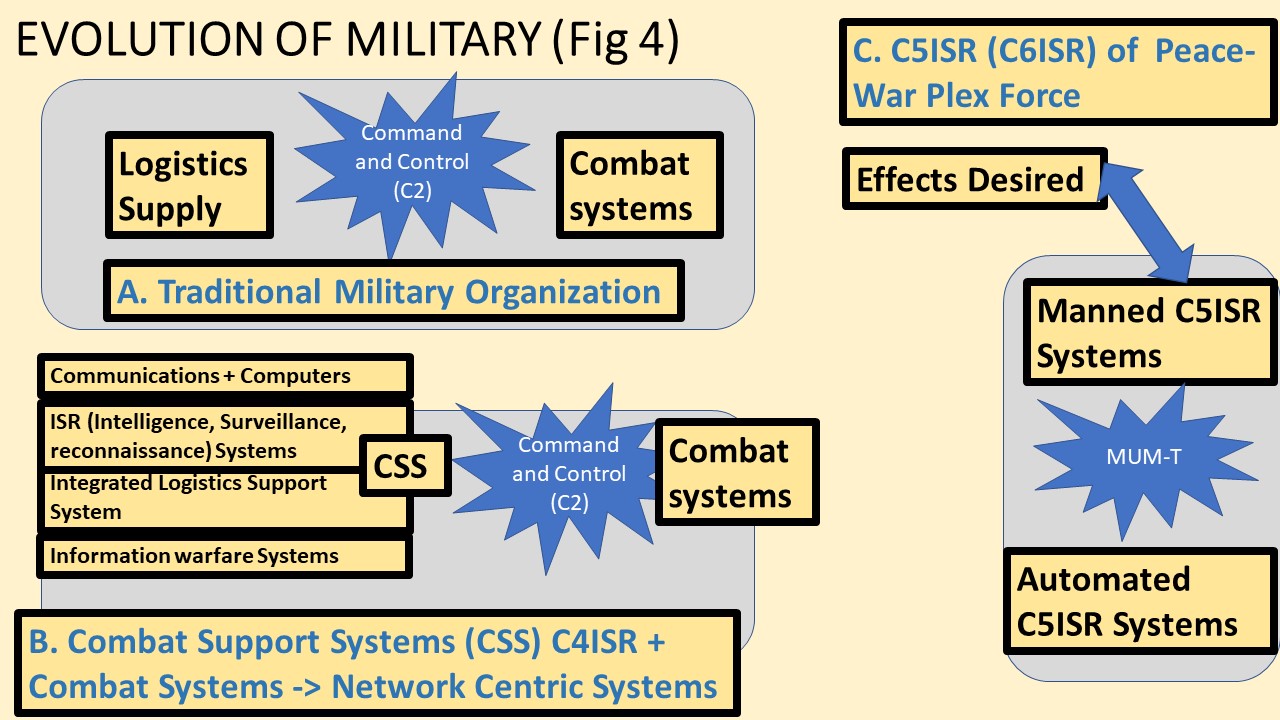 As explained in the previous article in this series, we are in a world that is shifting rapidly through technologies that have been unprecedented. This new world has also been blurring the distinct lines between conflicts during peace and violent military operations during war. In fact, we predict a chaotic world in the decade 2021 -2030 where war and peace states will remain entangled and may surface in aperiodic ways across the world. The military organizations designed for previous or even existing wars will need to not only transform through the technological absorption but will also need to merge with other instruments of national power. We propose an integrated national power organization (NPO) to be a potential option to respond to the chaos and confusion that the newer technological systems will create.