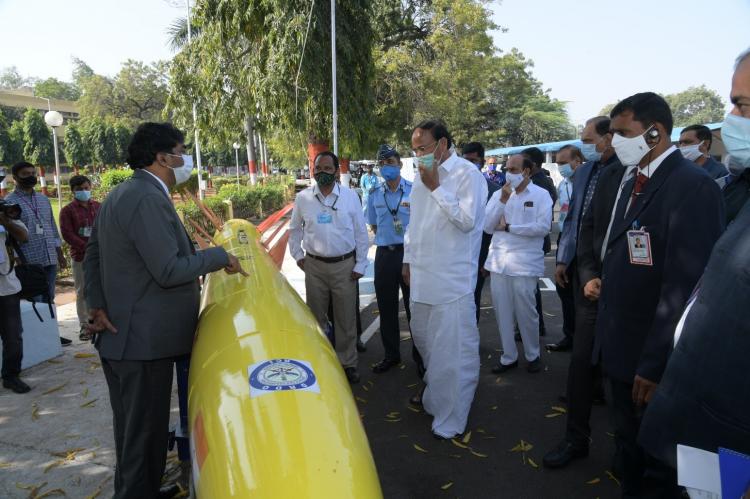 The Integrated Weapon System Design facility will enhance the capability in design and development of command & control systems for surface-to-air missile (SAM) systems and ballistic missile defence (BMD) systems. The centre will give thrust to the overall system design and evaluation methodology for state-of-the-art missile systems and will help in improving the performance of missiles. This will play a major role in the realization of highly complex futuristic aerospace & defence systems.

Extending new year wishes to the scientists, Hon’ble Vice President said that year 2021 will open up new horizons, opportunities and also multiple new challenges. Addressing DRDO fraternity on the occasion, Shri Naidu complimented the scientists for their hard work and dedication even during the nationwide lockdown and stated that the efforts of DRDO have led to the phenomenal technological advancements in the form of series of successful missions such as HSTDV, SMART, ATGM, NGARM, HELINA, NAG, BRAHMOS etc. He mentioned that DRDO is an epitome and torchbearer of Scientific Social Responsibility and is a place of eternal learning. The role played by DRDO during the Covid Pandemic has set an example for others to emulate.

He further said that the development of a range of indigenous defence systems by DRDO has given confidence to government for banning import of 101 items.

Remembering Dr Kalam, Shri Naidu said that scientific institutions of the country should never work in the incremental mode rather they should continuously attempt to leapfrog in scientific endeavors. He praised the scientists for maintaining the legacy of Dr Kalam.

He said that Dr Kalam wanted India to become a superpower and mentioned that the scientists have the calibre to make Atmanirbhar Bharat. He pointed out that, it is important to hold hands of young techno-preneurs, industries, academia, guide them and move together to build a strong and technologically superior country. He stated that we have made commendable achievements in missiles, and hoped that by doing so we may become top exporter in the field of missiles.

Shri Naidu also inaugurated a new missile technology exposition and seminar hall in the same campus. The exposition will display missile technologies and weapon systems and the centre will be the backbone for outreach activities. This hall is a part of knowledge management initiatives taken up by the Missile Complex to provide an interactive platform for continuous learning and fostering technical excellence among the missile community. It will be a hub for organizing scientific expositions, structured training programmes on virtual platforms and technical lectures for the benefit of DRDO community.

He commended the work being done by DRDO under the dynamic leadership of Dr G Satheesh Reddy, Secretary, DDR&D & Chairman DRDO. Shri MSR Prasad, Director General, Missiles and Strategic Systems was also present during the visit and explained about the various missile technologies.