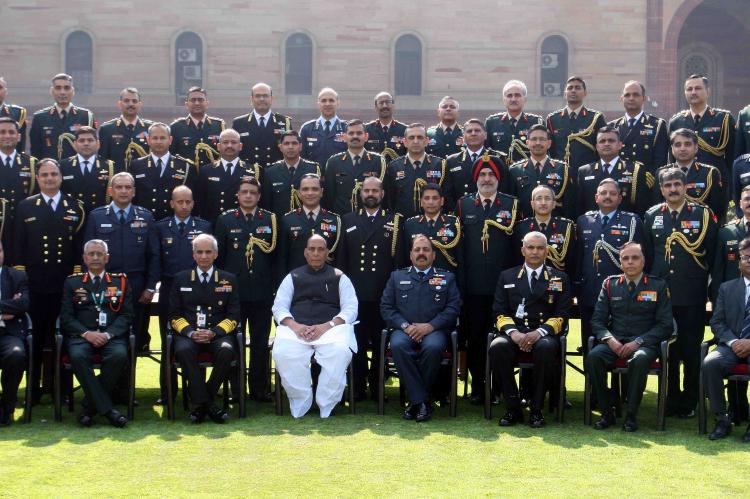 Raksha Mantri Shri Rajnath Singh has said terror and its related violence have posed serious challenge to the international security environment and the inter-play between state and non-state actors as proxies to spread violence have further increased the threat. He said the continued presence of terrorist infrastructure and state support to terrorists in the neighbouring country have tested India’s patience. However, as a responsible and powerful nation, India had displayed that it was able to disrupt and deter the activities of terrorist groups and their patrons. Addressing the third Defence Attachés Conference here today, Shri Rajnath Singh assured that India would continue to do so.

Speaking on the threats in the Indian Ocean and the Indo-Pacific region Raksha Mantri said, “We need to be more focused to secure our interests. We have adopted pro-active measures to promote peace and stability in the region as well as to increase defence and security cooperation with the Indian ocean rim countries so as to create a stable maritime environment.”

Turning his attention to DefExpo 2020 and opportunities provided by it, Shri Rajnath Singh said, “With the establishment of two industrial corridors in the states of Tamil Nadu and Uttar Pradesh, it is expected that this will increase defence manufacturing and exports. There is a lot of scope for DAs to work and attract FDI in these corridors. India has also offered several defence Line of Credits (LOC) to friendly countries to allow Indian defence exports and increase their presence in the global market.

Raksha Mantri added that a large country like India cannot restrict its defence cooperation to a few countries. Efforts should be made to expand it continuously. In this direction, Shri Rajnath Singh announced creation of 10 new Defense Wings so that 10 more Defence Attachés (DAs) could be appointed. This will further strengthen India's defence diplomacy, he added.

The Defence Public Sector Undertakings (DPSUs) have also opened offices for their liaison officers in different countries like Vietnam, Singapore, Myanmar, Oman, etc. An Export Promotion and Investor Cell has been set up under the Department of Defence Production to facilitate Indian companies’ efforts for exports. Notification of Open General Export License (OGEL) is also an important step in this context.

Shri Rajnath Singh also appreciated the efforts made by the DAs for increasing the participation of the various Defense official delegations and industry in the Defense Expo 2020 to be held in Lucknow, which will be the largest DefExpo ever.