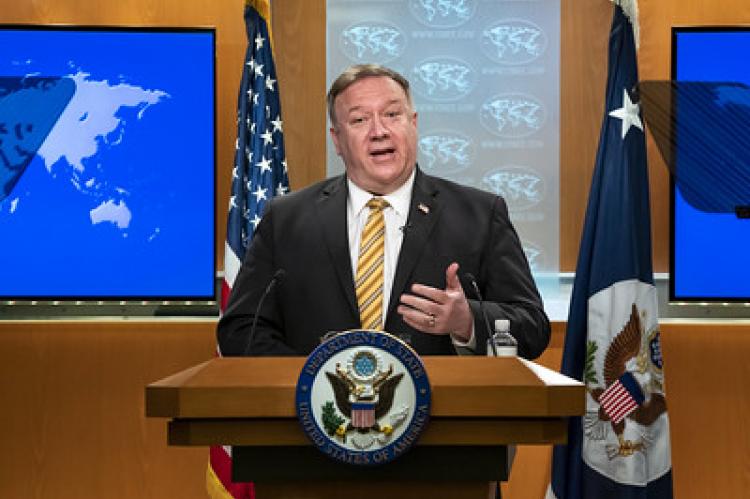 The United States Secretary of State Mike Pompeo on Thursday announced that the US is re-assessing their troops currently deployed across the European Union, aiming to shift focus on China in an effort to counter the rising threat from the Communist Party of China to India, Malaysia, Indonesia, and the Philippines.

Pompeo was commenting at the Brussels Forum 2020 virtual Conference.

The US Secretary of State went on to add: “It’s been a long time since there has been a strategic review of our force positioned all across the world.”

“We’re going to make sure we’re postured appropriately and have resources in place to counter the PLA (People’s Liberation Army).  That is the challenge of the time,” he said.

Pompeo mentioned that US President Donald Trump has reiterated that there has to be a united effort to prevent China, who according to him, aims to dictate the rules and terms of those “relationships when they’re not fair and equitable to our people”.

He mentioned the PLA’s “provocative military actions” and its continued hostility in the South China Sea, border disputes and recent face-offs with India coupled with an opaque nuclear program, and threats against peaceful neighbours. He even added that China is not adhering to global agreements, including the World Health Organisation (WHO), World Trade Organisation (WTO), the United Nations (UN) and also to the people of Hong Kong. Beijing has been trying to use their signature economic-poaching practices to force nations in doing business with them.

China has been fast expanding military and economic influence in the Indo-Pacific region, triggering concern in various countries of the region and beyond. It is also engaged in hotly contested territorial disputes in both the South China Sea and East China Sea. Beijing has built up and militarised many of the islands and reefs it controls in the region. Both areas are stated to be rich in minerals, oil and other natural resources and are vital to global trade.

On the corona cover up, the secretary of state said, “But the CCP’s cover up of the corona virus, an outbreak that began in Wuhan, China – which has now killed tens of thousands of our people, and hundreds of thousands of people across the world – I think it’s accelerated everyone’s awakening.”

Pompeo further emphasised that the world needs to work together to continue the “transatlantic awakening to the China challenge” to preserve the fundamentals of independence, prosperity, and ensuring that the world has a peaceful future.

He further said that it does not make sense to talk about peace with an increasingly belligerent CCP just to appease the business community. He also disagreed that reducing troops in Germany would increase chances of a Russian aggression on Europe. The withdrawal of troops from Germany is in sync with US President Trump’s order.

The main aim is to redraw the policy of US troop deployment and take a magnified approach to evaluate and reassess the nature of any conflict, degree of threat, rollout strategies of military resources including the intelligence community, the Air Force or the Marines Corps and Army from the inefficient approach of just stationing troops in an area, Pompeo said.