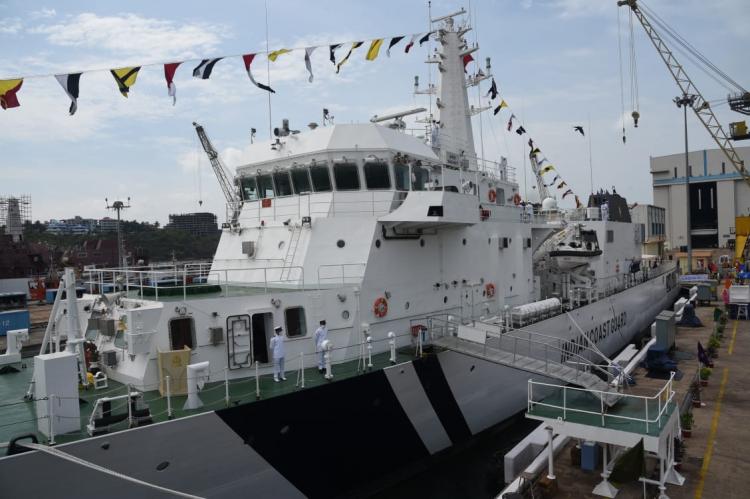 Commending ICG and GSL for this initiative of commissioning through digital means, Shri Rajnath Singh said, “The commissioning of these ships is an important milestone in India's coastal capability building process. Also, despite challenges like COVID-19, it is also a great example of our commitment and determination for the safety and security of the country. The rising power of 'our sea guard', ICG and Indian shipbuilding industry is a matter of pride for the country.”

Spelling out Prime Minister Shri Narendra Modi’s vision ‘SAGAR’ (Security and Growth for All in the Region), Raksha Mantri said, “The oceans are the lifelines of not only our country, but also global prosperity.” Safe, protected and clean seas provide economic opportunities for our nation building. India is an emerging maritime power, and our prosperity is also very dependent on the sea. Being a responsible maritime power, Oceans are priority of the Government, he added.

Praising the role of ICG guarding the coastline, Shri Rajnath Singh said, “As the fourth largest Coast Guard in the world, it has established itself as a reliable force. It not only protects our coastline and coastal community, but also protects economic activities, and maritime environment in the Exclusive Economic Zone (EEZ).”

The Raksha Mantri acknowledged that the sea can become a medium of any kind of threats sponsored by anti-national elements. Therefore it is extremely important to develop a collaborative and cooperative approach among all stakeholders. He expressed confidence that the Coast Guard Ships being inducted from today onwards will add to their strength and help in addressing the challenges related to maritime terrorism, drug trafficking, smuggling, maritime law enforcement and the search and rescue of threatened mariners. 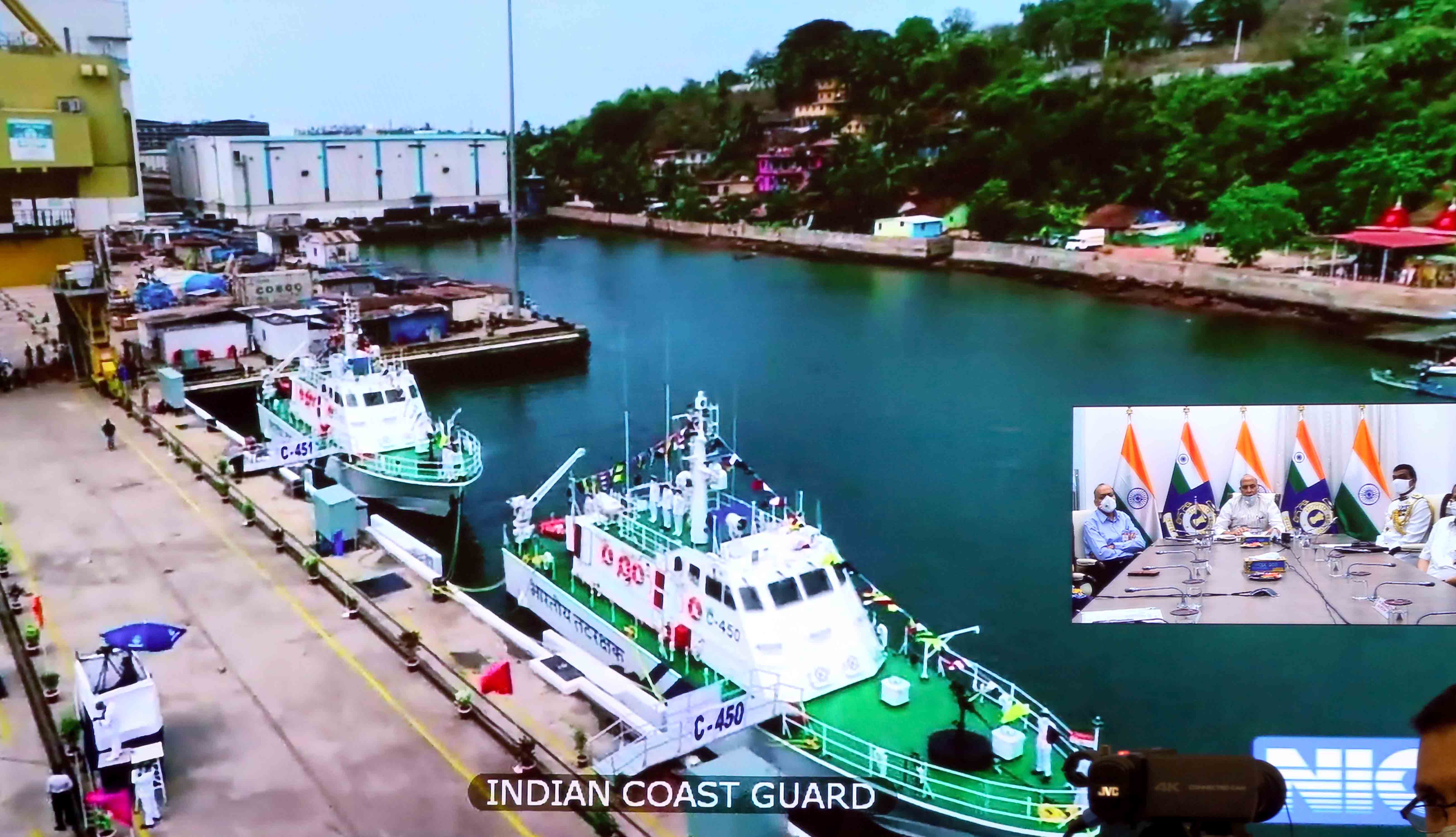 Shri Rajnath Singh praised the efforts of Goa Shipyard and L&T Shipyard, Hazira who have continued to build and maintain ships under the present circumstances. He said, “It also shows the professionalism. It is noteworthy that Indian Shipyards are making significant contribution to the vision of 'Make in India' and 'Self-reliant India campaign', which was recently inspired by our Prime Minister.”

Director General of Indian Coast Guard Krishnaswamy Natarajan said the commissioning event proved that despite the hurdles posed by COVID19, the ICG moves ahead. He said the new additions to the ICG fleet of vessels would assist the ICG to remain ever vigilant at sea and contribute to nation's fight against COVID-19.

The 105 metre long ship ‘Sachet’ displaces approximately 2,350 tons and is propelled by two 9,100 KW diesel engines designed to attain a maximum speed of 26 knots, with an endurance of 6,000 nautical miles. The sustenance and reach, coupled with the latest equipment and systems, provides her the capability to perform the role of a command platform and undertake tasks to fulfill the ICG charter. The ship is designed to carry a twin-engine helicopter and four high speed boats and one inflatable boat for swift boarding and search & rescue operations. The ship is also capable of carrying limited pollution response equipment to undertake oil spill pollution response at sea.

‘Sachet’ meaning alert is projection of will and commitment of ICG ‘to be ever vigilant for serving and protecting’ the maritime interest of the Nation. The ICGS Sachet is being commanded by Deputy Inspector General Rajesh Mittal and manned by 11 Officers and 110 men. It is for the first time in Indian maritime history that a ship was commissioned through digital medium, maintaining strict protocol of social distancing in the backdrop of COVID-19 pandemic.

The IBs C-450 and C-451 are indigenously designed & built by Larsen & Toubro Shipyard Hazira, and fitted with latest navigation and communication equipment.  The two 30 metre long boats are capable of achieving speeds in excess of 45 knots and designed for high speed interception, close coast patrol and low intensity maritime operations. The quick response capability of the IBs makes it an ideal platform to respond and thwart any emerging maritime situation. The ships are commanded by Assistant Commandant Gaurav Kumar Gola and Assistant Commandant Akin Zutshi.

The Coast Guard has been a pioneer in inducting indigenous assets which has enabled it to remain operationally available throughout the year.  In continuation of maximising the indigenous content in the IBs has about 70 per cent of indigenous contents, thus providing the necessary fillip to the Indian shipbuilding industry.

The ships, on joining the Coast Guard fleet, will be deployed extensively for Exclusive Economic Zone (EEZ) surveillance, coastal security and other duties as enshrined in the Coast Guard charter of duties, to safeguard the maritime interests of the Nation.  With the commissioning of these ships, the ICG has reached a landmark 150 ships & Boats and 62 aircraft. Further, 40 ships are in various stages of construction at different Indian Shipyards and 16 advanced light helicopters are under production at Hindustan Aeronautics Limited, Bengaluru, which will provide the added strength to the surveillance capabilities of ICG to deal with the ever-dynamic maritime challenges.

The ICG has to its credit of saving about 400 lives at sea, 4,500 lives as part of assistance rendered to civil authorities and undertook 32 medical evacuations in the year 2019 alone. The deterrence created by the ICG is not limited to the Indian waters, but collaboration with friendly littoral states as per provisions of bilateral cooperation agreements resulted in successful apprehension and seizure of drugs in Indian Ocean Region (IOR). The real time information sharing, close coordination and understanding between ICG and other international agencies has been the key success of these operations. Hawk eye vigil of the Indian EEZ has ensured seizure of Rs 2,000 crore contraband, detainment of 30 foreign fishing vessels with 119 miscreants for fishing illegally in Indian waters during the same period.