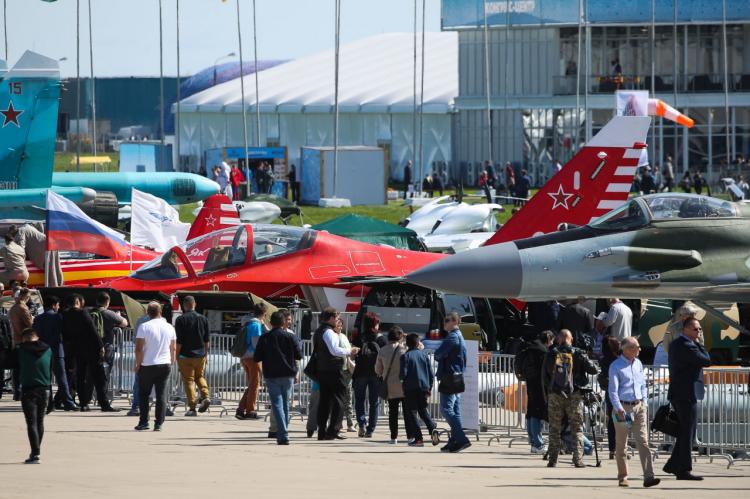 The United Aircraft Corporation (PJSC UAC as part of the Rostec State Corporation) will display new products and wide exposition at the International Aviation and Space Salon MAKS-2021, which will be held in Zhukovsky near Moscow on July 20-25.

The UAC home air show will premiere the presentation of the new aircraft, which will take place on July 20, the first day of MAKS-2021. The presentation will be broadcast on the YouTube channels of the Rostec State Corporation www.youtube.com/channel/UCW_9GLplsHRhrimFHnqRdGw and UAC www.youtube.com/user/UACRussia, as well as on the project website https://checkmate.uacrussia.ru/.

For the first time, the MC-21-310 medium-range aircraft with Russian made PD-14 engines and the Il-114-300 regional turboprop aircraft will be demonstrated to the public. Both aircrafts will be represented in the flight program and in the static parking lot of the air show.

The "Superjet 100" airliner will be demonstrated in the exposition and in the flight program. Guests will also see the business version of this aircraft. It is planned to hold a conference dedicated to the results and prospects of the Superjet program development during the air show.

A number of agreements, including on the supply of new civilian aircraft, are to be signed during the event.

At MAKS-2021, the UAC and its companies have an intense business program, including meetings with customers and business partners, as well as a discussion about strategic aspects for the development of aviation technologies and promising markets for aircraft, and international conference upon a work of aviation for suppressing wildfires.

The static part of the exposition will feature military, transport, strategic and special aircraft, including the multifunctional Su-57 fighter in export version. The UAC pavilion will display models of all corporation aircraft lineups, procedural simulators and front-line aircraft virtual reality stands.

The airshow guests will witness traditionally spectacular flight program, in which, in addition to civilian novelties, the participation of the Su-57, Su-35S, Su-34, Su-30, MiG-35, MiG-29, Yak-130, Yak-152 aircraft is planned.

All events during MAKS-2021 airshow will be held in accordance with the requirements to avoid the spread of COVID-19.

Irkut Corporation (as part of UAC of Rostec State Corporation) started tests of MC-21-300 to confirm the possibility of operating the aircraft in the presence of water on runway.

To conduct tests at the airfield "Ulyanovsk-Vostochny" a "pool" was mounted more than 70 m long and more than 20 m wide. Parameters of the "pool" provide a normalized water depth in accordance with Russian and international requirements, which are established for these types of tests.

Within a few days, MC-21-300 aircraft will run on water in a wide range of speeds and different modes of main engines, including the use of thrust reverser.

During the tests it is necessary to confirm that during  aircraft movement the water does not disrupt the work of its main and auxiliary power units, and does not damage structure elements, systems and equipment of the aircraft.

The course of the tests is recorded by a complex of onboard measurement equipment, cameras of video surveillance system installed on the ground and on the plane, as well as by representatives of certification centers and specialists of Irkut Corporation.

The tests are conducted as part of the MC-21-300 aircraft certification program, in accordance with Russian and European airworthiness standards. 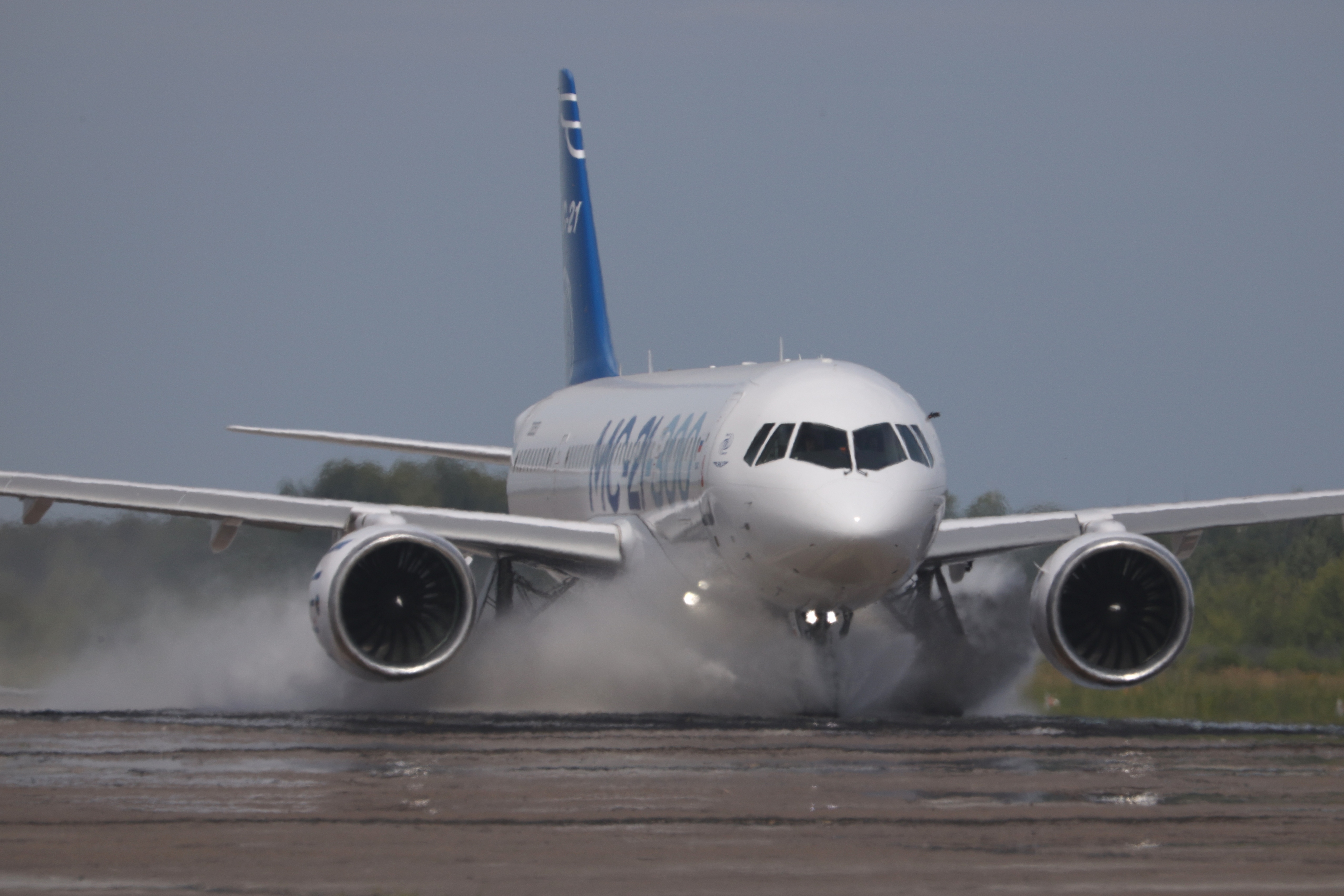 On the 15th of December 2020 the MС-21-310 aircraft equipped with the new Russian PD-14 engines made its maiden flight from the airfield of Irkutsk Aviation Plant, a branch of Irkut Corporation (part of UAC, Rostec State Corporation).

The aircraft was operated by the crew of test pilots Vasily Sevastyanov and Andrey Voropaev and test engineer Alexander Solovyev.

The pilot Vasily Sevastyanov said after landing: "The flight task was fully completed. The new engines worked steadily in all modes".

The General Director of PJSC UAC, Yury Slyusar, noted: "MC-21-310 heads to the development tests and joining the certification program. The ability for customers to choose the type of aircraft engine expands the aircraft's market potential and reduces the risks of the program." 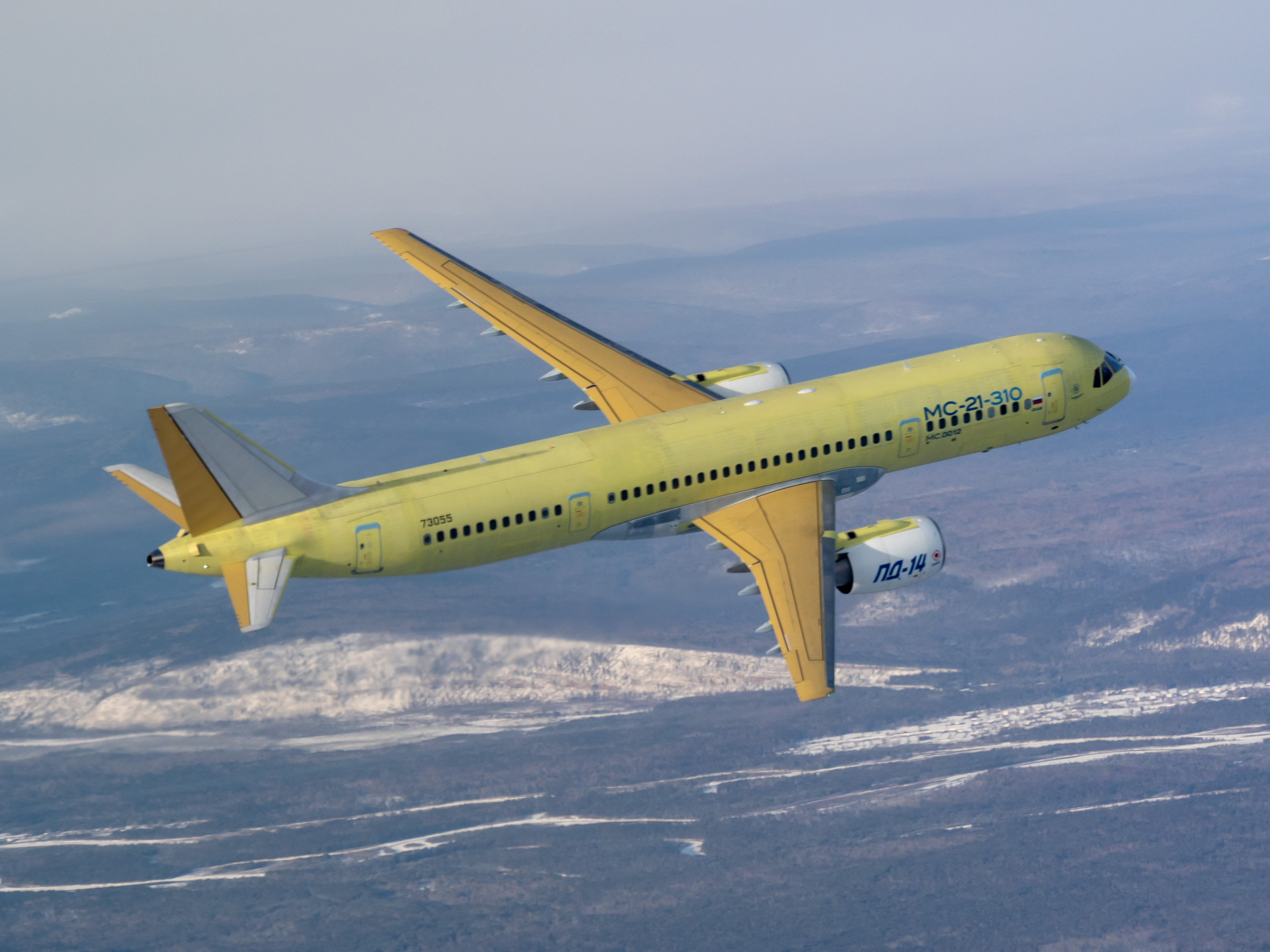 Rostec announced the results of the Russian Be-200ES firefighting operations in Turkey.

Over the past three months, the Russian Be-200ES amphibious aircraft flew more than 200 times for suppressing wildland fires in Turkey. Aircraft with Russian crews onboard have been participating in the firefighting missions at difficult and strategically important places and locations since June 16. Total flight time exceeded 400 hours.

Two amphibious aircraft manufactured by the PJSC Taganrog Aviation Scientific-Technical Complex n.a. G.M. Beriev (part of PJSC UAC of the State Corporation Rostec) are currently on duty in the vicinity of Antalya, Izmir and Bodrum. Russian aircraft was involved in dousing flames at a fireworks factory near the city of Sakaria.

It took less than two hours for the crews to localize and completely extinguish the fires there. Another major fire - in the Dardanelles Strait - was stopped in less than a day. Due to that fact, it became possible to avoid disruptions in the movement of ships through the strait. The amphibious aircraft dropped over 300 tons of water on the heart of major fires. The flights were carried out together with the observer pilots from the Turkish side. Amphibious aircraft will remain on duty until October 15.

“Our Be-200ES aircraft completed all the tasks set for firefighting, with more than 4000 tons of water dumped on the burning forest in total. Our crews worked in a difficult fire situation in rugged mountain terrain. Be-200ES filled tanks from the mountain lakes and the open sea, aircraft carried out more than 500 water intakes. The Be-200ES proved themselves as reliable aircraft, highly effective in dousing forest fires,” said the head of the complex brigade of the Beriev Alexander Ternovoy.

Note that the United Aircraft Corporation organized the signing of the Forest fire-fighting service agreement and the aircraft deployment with the assistance of the Ministry of Industry and Trade and the Emergencies Ministry of the Russian Federation, and the active support of the State Corporation Rostec Representative Office in Ankara. A request for assistance in combating forest fires came from the Ministry of Agriculture and Forestry of the Republic of Turkey.

The successful operation of the aircraft in real conditions will allow developing further cooperation with Turkish partners and, as well, discussing the prospects for the purchase of Russian Be-200ES amphibious aircraft to renew the fleet of the Turkish fire service.

On December 16th, 2020, a new regional passenger turboprop aircraft Il-114-300 made its maiden flight at the Zhukovsky airfield. Aircraft developer is Aviation Complex named after S.V. Ilyushin (the main enterprise of the Transport Aviation Division of UAC (United Aircraft Corporation) within the Rostec State Corporation).

During the flight, the flight crew checked power plant operation modes, aircraft stability and controllability, as well as the operation of its systems.

"The first flight of the IL-114-300 is the result of the excellent work of tens of thousands of people - researchers, engineers, specialists - working in the design bureau and at the plants of the United Aircraft Corporation, at the enterprises of our suppliers and partners. The development of the new regional turboprop aircraft opens up new prospects for the Russian civil aircraft industry," said Yury Slyusar, General Director of United Aircraft Corporation.

Il-114-300 is a short-range passenger turboprop aircraft. The aircraft is being manufactured for local airlines, for the operation in the regions with weak airfield infrastructure and with difficult climatic conditions. The Il-114-300 can be used to ensure air mobility of the population in remote regions of the North, the Far East and Siberia.

The aircraft is being manufactured in cooperation with the leading Russian developers of systems and equipment; the most significant amount of components is supplied by the enterprises of the Rostec State Corporation.

The aircraft is equipped with TV7-117ST-01 turboprop engines designed and manufactured by JSC UEC-Klimov JSC (part of JSC United Engine Corporation, Rostec State Corporation). The engine’s takeoff power is up to 3100 hp., which is higher in takeoff and cruise modes in comparison with the base engine (TV7-117CM). Except the engine, the power plant includes a new high-thrust AV-112-114 propeller and a new automatic control system using a combined modernized engine and a BARK-65SM propeller control unit. This control system allows us to maximize the potential of the engine and propeller, increasing the efficiency of the power plant.

The Il-114-300 is equipped with a digital flight and navigation complex that provides take-off and landing in meteorological conditions corresponding to ICAO Category II.

Modernization and licensed production of IL-103 in Hungary concluded

The agreement on the modernization and licensed production of IL-103 in Hungary was concluded on March 17 between Ilyushin Aviation Complex (part of Russia’s United Aircraft Corporation (UAC) under Rostec State Corporation) and the Hungarian company Aviation Engineering Zrt The signing ceremony took place in the presence of Russian Deputy Minister of Industry and Trade Oleg Bocharov and Counselor, Deputy Ambassador of Hungary to the Russian Federation Laszlo Vida. The document was signed on the Russian side by the First Deputy General Director of UAC, Managing Director of ILYUSHIN Sergey Yarkovoy, and on the Hungarian side by the General Director of Aviation Engineering Zrt. Laszlo Boros.

The parties agreed to work together to develop and manufacture an improved version of the IL-103 light multipurpose aircraft at the Aviation Engineering production facility located in the Hungarian city of Pecs. 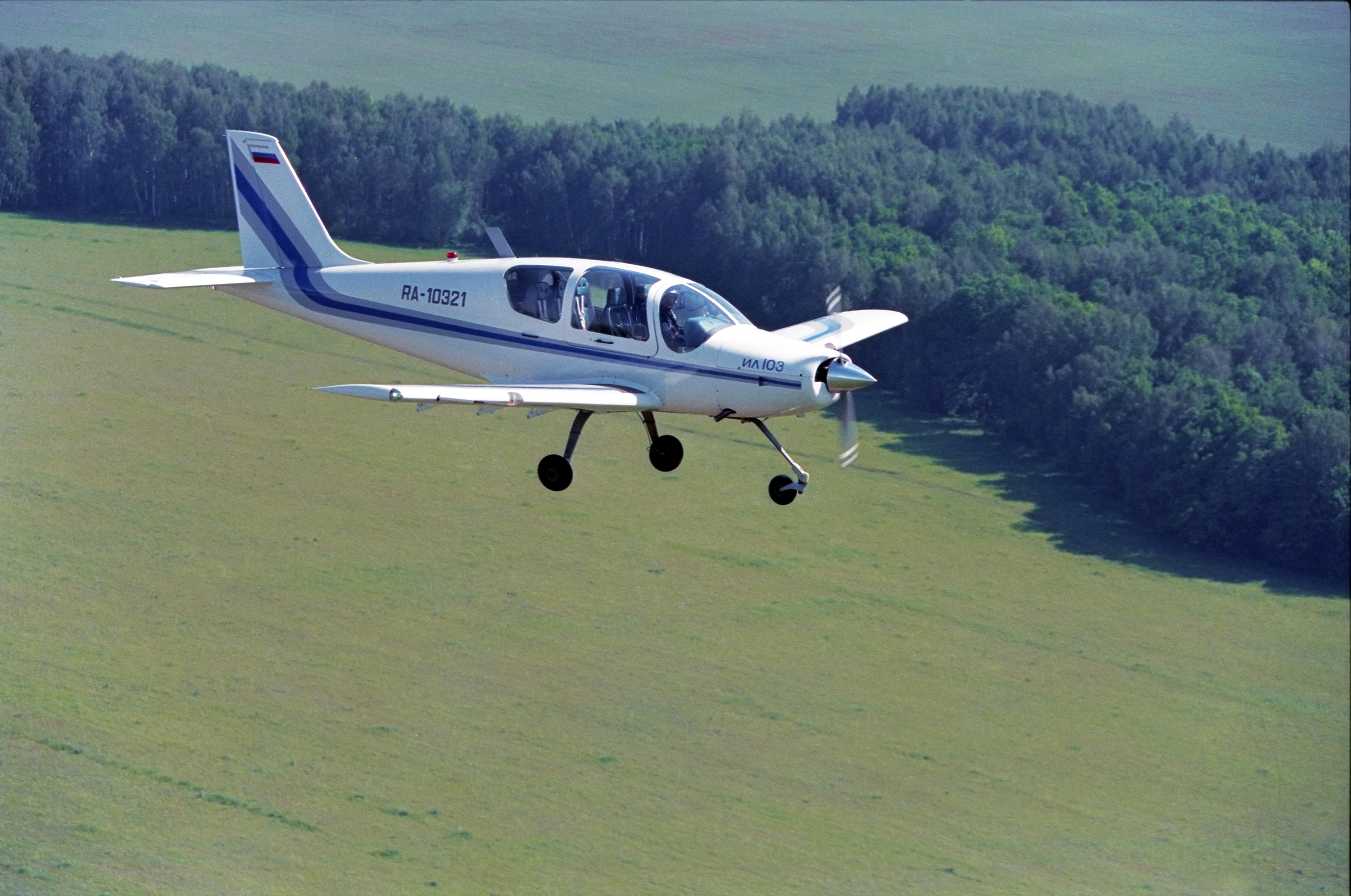 The new IL-103 will be a modernized version of the previously operated four-seat single piston engine passenger aircraft. It combines effective aerodynamic characteristics, a comfortable spacious cabin, a reliable engine, and modern avionics. The aircraft can be operated in any climatic conditions, including on short and unpaved runways. It comes with the capability for hangar-free storage.

As part of the contract, it is planned to convert all existing design documentation to digital format and modernize the aircraft to make it suitable for successful entry into the general aviation market. The existing type certificates will undergo major changes based on the results of ground and flight tests of the upgraded version of the IL-103.

The modernized IL-103 will be a universal platform, acting as a basis for various versions of the aircraft that can be produced at the request of the customer, including: training aircraft, aircraft for private use and tourism, transportation of those in need of emergency medical care, transportation of passengers and small cargo to hard-to-reach regions, environmental monitoring, patrolling, agriculture.

The IL-103 aircraft modernization project in cooperation with Hungarian partners will become an example of the export of Russian aircraft-building technologies to a European country. It allows the project participants to acquire new competencies and enter new markets with the improved aircraft. 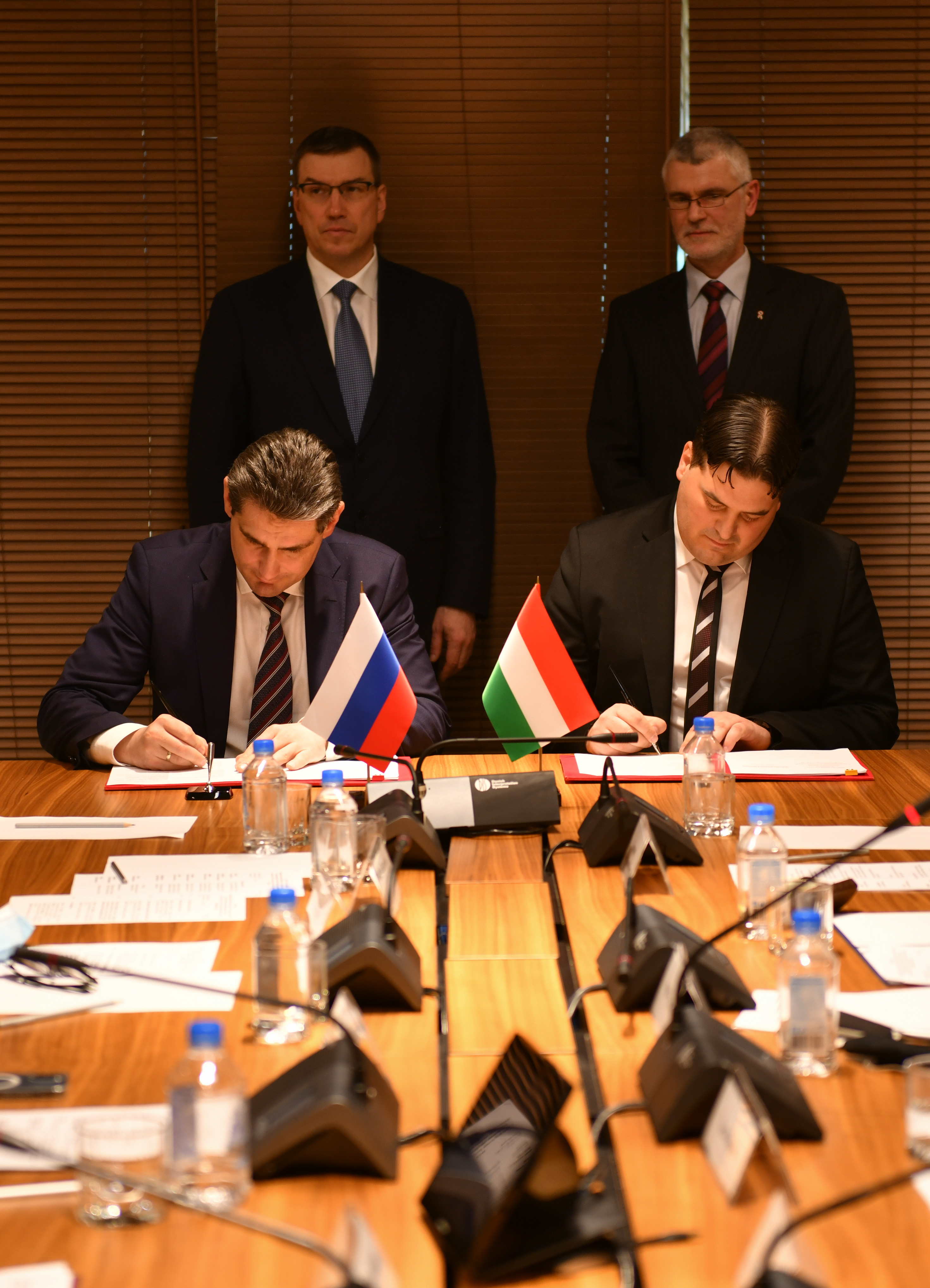 The United Aircraft Corporation (UAC) was established in 2006 to consolidate Russia’s main assets in aircraft design and production. The Corporation companies produce the aircraft of world famous brands "Sukhoi", "MiG", "Ilyushin", "Tupolev", "Yakovlev", "Beriev", as well as the new ones - Superjet 100 and MC-21. UAC enterprises perform a full cycle of work from design to after-sales service of aircraft. Mr. Yury Slyusar is UAC’s General Director.