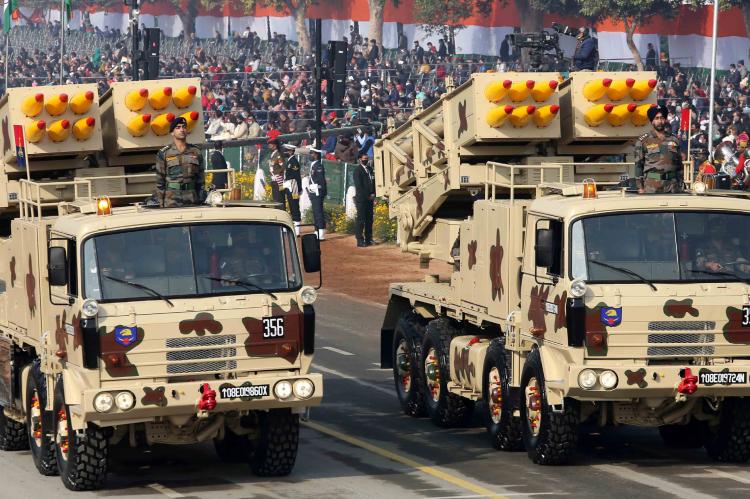 Union Budget for the Financial Year 2021-22, presented by the Finance Minister Smt Nirmala Sitharaman in the Parliament on February 01, 2021 has given historic push to defence modernisation by increasing defence capital outlay by 18.75 per cent.

The allocation under capital expenditure which relates to modernisation and infrastructure development of Armed Forces has been significantly increased.  The allocation under Capital of Rs 1,35,060.72 crore for FY 2021-22 represents an increase of 18.75 per cent over FY 2020-21 and 30.62 per cent over FY 2019-20. This is the highest ever increase in capital outlay of Defence in the last 15 years.

Allocation under Non-Salary Revenue to meet operational requirement has been increased to Rs 54,624.67 crore.  This is 6 per cent growth over FY 2020-21.

Raksha Mantri Shri Rajnath Singh has thanked Prime Minister Shri Narendra Modi and Finance Minister Smt Nirmala Sitharaman for increasing the defence budget to 4.78 lakh crore for the Financial Year 2021-22 (FY21-22), which includes capital expenditure worth Rs 1.35 lakh crore. It is nearly 19 per cent increase in Defence capital expenditure. This is the highest ever increase in capital outlay for defence in the last 15 years.

Raksha Mantri said special attention has been paid to economic reforms, employment generation, capital formation and creating infrastructure in India. “Based on 6 pillars of good governance this Budget will usher India into a new era of inclusive growth and prosperity,” he said.

Shri Rajnath Singh in a series of tweets said, “Several new policies & programmes to support India’s farmers, agriculture, infrastructure and reinvigoration of Human Resource have also been announced. I am glad that the Budget has proposed the opening of 100 new Sainik Schools in the country.” These schools will be set up in partnership with States, Non-Governmental Organisations (NGOs) and private institutions.

"As against Rs 4.21 lakh crore last year it is 4.78 lakh crores. Extremely disappointing to see the priority been given to defence modernisation. The security of the country cannot be compromised as we have seen in the recent conflict when the enemy had the impunity to challenge our sovereignty. Only 1.35 lakh crores for capital acquisition. All important projects especially for the maritime domain will have to be put on hold. Most of these capital acquisitions are all on going and the budget will just be able to cater for that. The shopping list of the services will again get carried forward. It’s time the country thinks strategically and makes an endeavour to equip the forces with reasonable teeth to be capable enough to bite the enemy," Maj Gen Rajan Kochar(retd), defence analyst.

"The big surprise is figures of Pension where GoI has show a reduction actual of Rs 11, 000 Cr over FY20-21 Budgetary estimate and is planning a further 10,000 reduction in FY21-22.  The Capital Expenditure increase of Rs 20,000 crore due to China situation in FY20-21 over FY20-21 Budget put this at Rs 134,510 crore. The same level has been maintained for coming year. Adequacy & efficacy of this will depend on how best we can manage the China situation. Also, it is not clear that in the Land Monetization announce in the Budget will Defense and Defense PSU lands be included," Rahul Chaudhry, Principal & CMD GTM Consulting.

"An 18 per cent increase in budgetary allocation for capital procurement goes some way in recognising the urgent need of modernisation and weapon enhancement requirements of the armed forces. That said given that capital procurement expenditure for the previous year exceeded the budgetary allocation by more than Rs. 20,000 crore a lot more needed to be done given the current geopolitical scenario and the glaring gaps in military preparedness," Anuj Prasad, Partner and Head - Aerospace and Defence, Cyril Amarchand Mangaldas.

"Under the circumstances it looks reasonable. There is an increase in capital outlay which auger well for modernisation of forces. This is definitely a positive sign," Lt Gen Jai Nehra (retd), Advisor CII.

"We are happy that there is 18% growth in Capital Acquisition budget for the MoD in terms of BE FY 22 over BE FY 21. However the growth is almost negligible when we compare BE FY 22 over RE FY 21. This is because the FY 21 saw emergency purchases (primarily global purchases) given the border situation. With the BE for FY 22 maintained at RE FY 21 level, we hope the spend shifts towards Indian procurement, paving way for traction on Indian procurement to be picking up in FY 22," J.D. Patil, Whole-time Director, L&T.

"The Finance Minister has presented a good budget. We welcome the budget allocated for the defence sector for 2021-22. This year's  defense budget reflects the highest ever increase in capital outlay for defence in the last couple of years and we are hopeful that a significant portion of these funds will be utilized in providing a boost to the production of the 101 defense items that were banned last year, further augmenting homegrown defense manufacturing," SM Vaidya, Executive Vice President and Business Head, Godrej Aerospace.