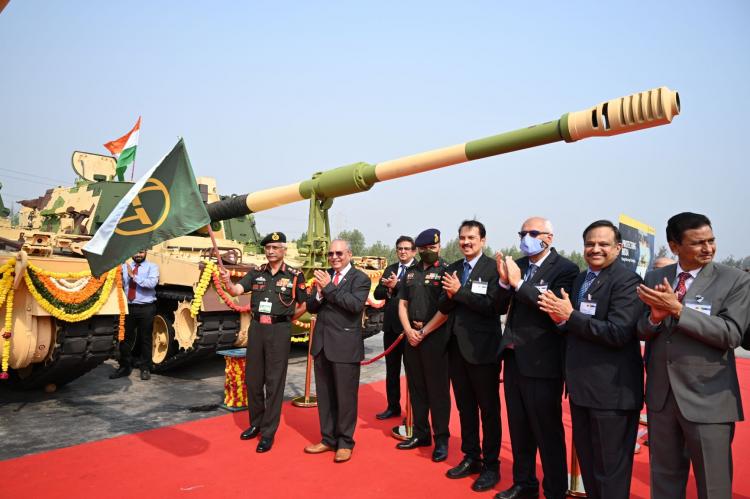 With flag-off of the 100th Howitzer, L&T has successfully completed delivery of all the Howitzers under the current MoD contract awarded in May 2017 and has maintained its track record of ahead of time deliveries of complex platforms. This is a testimony to the program management capabilities, complex system integration skills, and company’s hi-tech manufacturing prowess and execution efficiency. The Raksha Mantri Rajnath Singh had flagged-off 51st K9 VAJRA ahead of schedule in January 2020 from ASC, Hazira.

L&T Defence produced the ‘K9 VAJRA’ under the largest contract awarded to an Indian private company by the Ministry of Defence, through global competitive bidding. L&T was the prime bidder for the program, with South Korean defence major Hanwha Defense, the OEM of the world’s top rated Howitzer the ‘K9 Thunder‘, as its technology partner. The ‘K9 VAJRA’ Howitzer Program involved the delivery of 100 Howitzers with associated Engineering Support Package (ESP) covering spares, system documentation and training. It also involves Maintenance Transfer of Technology (MToT) to an army base workshop to support the Howitzers throughout their operational life cycle.

On this occasion, J.D. Patil, Whole-Time Director & Senior Executive Vice President (Defence & Smart Technologies), L&T, said, “We have been honoured by the Chief of the Army Staff by calling at the Armoured Systems Complex to flag-off the 100th ‘K9 Vajra’ to mark the conclusion of the deliveries of these hi-tech manufactured efficient systems for the Indian Army. The production of complex platforms like the K9 VAJRA contributes to the Indian economy with a large multiplier effect, creates new job opportunities and plays a significant role in enhancing India’s Industrial ecosystem. With the experience, track-record, skills, capabilities and infrastructure that L&T has built, we are ready to indigenously develop, and build India’s future capabilities.”

“With the delivery of 100th K9 VAJRA Howitzer, we have created an Industry benchmark by delivering the only in-service equipment of its class, a major land-based program ahead of schedule. We hope and believe that under the Aatmanirbhar Bharat policies of the Government of India, the national asset created in the form of the Armoured Systems Complex to execute this ambitious contract, will provide sustenance to the painstakingly built supply chain of more than 1000 MSME partners.”

The ‘K9 VAJRA’ systems are delivered with more than 80% indigenous work packages and above 50% indigenisation (by value) at the program level. This involves local production of over 13,000 components per system through a supply chain spread across the states of Gujarat, Maharashtra, Karnataka and Tamil Nadu.

L&T had started the journey of indigenisation, right from the inception of the program, by replacing fourteen critical systems in the Korean ‘K9 Thunder’ with indigenously developed and produced systems for the trial gun fielded for user evaluation trials, thus giving birth to the Indian version K9 VAJRA - a bespoke solution - made for Indian operating conditions and requirements.

The VAJRA variant developed by L&T with India specific features emerged fully compliant to Indian Army’s needs during the arduous and extended field trials. L&T exceeded the indigenous manufacturing content by grooming a young team of engineers and specialising them in manufacturing automation and integration with the help of its in-house team of experts as well as by training at Hanwha facilities in South Korea. Subsequently, this team trained the supply chain partners as well as teams from L&T’s five defence production units, that served as local centers for the nearly 1000 supply chain partners in a hub and spoke model.