Says, it would give fillip to ‘Make in India’, boost demand & build capacities for a New India 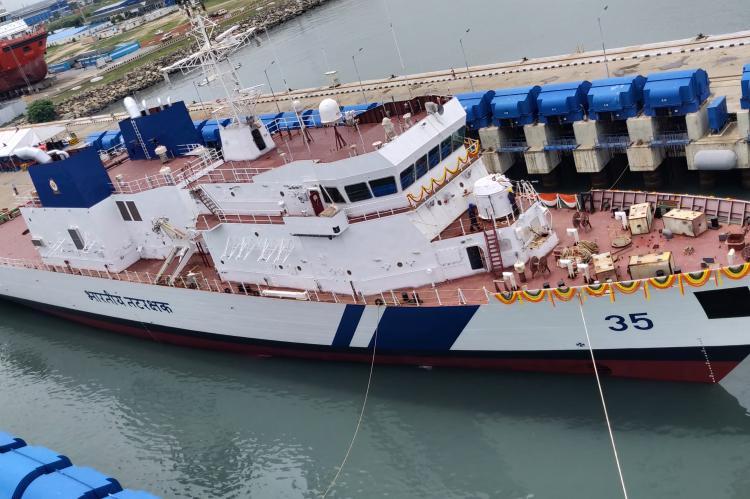 Through enhanced budgetary support over the years, the Government has placed modernisation and infrastructure development of the Armed Forces at the centre stage of the National Security and Defence Planning process. The total allocation under Capital Outlay of the Defence Services has been increased from Rs 86,740 crore in 2013-14 to 1.52 lakh crore in 2022-23. There is an enhancement of 76% over a period of nine years. Further, during this period, the total Defence Budget including Defence Pensions has increased by 107.29%, from Rs 2.53 lakh crore in 2013-14 to Rs 5.25 lakh crore in 2022-23.

Sustained thrust on Modernisation & Infrastructure Development: In the Union Budget 2022-23, the Capital Allocations pertaining to modernisation and infrastructure development of Armed Forces has been significantly increased to Rs 1.52 lakh crore. This represents an increase of Rs 17,308 crore (12.82%) over FY 2021-22. Further, cumulative increase in the Capital Budget since 2019-20 has been Rs 48,975 crore (47.37%).

The increase in the overall Capital Budget reflects the Government’s resolve towards sustainable enhancement in the modernisation and infrastructure development and also towards achieving the objectives of ‘Aatmanirbhar Bharat’.

In order to give push to indigenous Domestic Enterprises under the ‘Aatmanirbhar Bharat’, the share of domestic capital procurement, which was earmarked at 64% in 2021-22, has been enhanced to 68% of the Capital Acquisition Budget of the Defence Services (Rs 1.24 lakh crore) for the FY 2022-23, which would be Rs 84,598 crore.

The Capital segment of the MoD (Civil) budget catering to organisations such as Indian Coast Guard (ICG), Border Roads Organisation (BRO) and Directorate General Defence Estates (DGDE) etc has also seen a notable jump of 55.60%. In absolute terms, this amount is Rs 8,050 crore in FY 2022-23 against Rs 5,173 crore in FY 2021-22.

The Capital Budget of Border Roads Organisation (BRO) has been increased by 40% to Rs 3,500 crore in FY 2022-23 vis-à-vis Rs 2,500 crore in FY 2021-22. This will expedite the progress of creation of border infrastructure including important tunnels (Sela and Naechiphu tunnel) and bridges on major river gaps.

Underlining the importance of overall maritime security, the Capital Budget of the Indian Navy has been enhanced by 44.53%, with a total allocation of Rs 46,323 crore in FY 2022-23. This increase is aimed at acquisition of new platforms, creation of Op and Strategic Infrastructure, bridging of critical capability gaps and building a credible maritime force for the future.

Additionally, to boost the Coastal Security, the Capital budget of Indian Coast Guard has been enhanced by 60.24% to Rs 4,246 crore in FY 2022-23 vis-à-vis Rs 2,650 crore in FY 2021-22. This enhancement is aimed at building up of assets such as acquisition of ships & aircraft, augmentation of infrastructure, establishment of coastal security network and building up technical & administrative support structures.

Rs 173.03 crore and Rs 131.08 crore have been provisioned under DGDEs Capital Budget for BE 2022-23 and RE 2021-22, respectively, mainly for construction of boundary posts/pillars and perimeter fencing of Defence Land. This is directed towards preventing encroachment on Defence Land.

Further, for enabling the Defence Industrial eco-system in the country, iDEX and DTIS has been allocated Rs 60 crore and Rs 23 crore respectively in the FY 2022-23. Under the iDEX (Innovations for Defence Excellence) Scheme, MoD aims to create an environment which fosters innovation and encourages technology development in Defence by engaging R&D institutes, academia, industries, start- ups and even individual innovators. Defence Testing Infrastructure Scheme (DTIS) envisages the creation of state-of-the-art testing infrastructure in partnership with the private industry thereby boosting domestic defence and aerospace manufacturing.

In a series of tweets, Raksha Mantri Shri Rajnath Singh congratulated the Finance Minister on presenting an excellent Union Budget 2022-23. He said, the Budget would give fillip to ‘Make in India’, boost demand and build capacities for a stronger, prosperous and confident India.

Congratulating to Finance Minister, Nirmala Sitharaman, defence minister Rajnath Singh, said, "It is a Budget which would give fillip to ‘Make in India’, boost demand and build capacities for a stronger, prosperous and confident India."

"The Budget outlines the Government’s focus on Atamnirbharata and Prime Minister Shri @narendramodi’s vision for development and pro people reforms. It is a growth oriented Budget focused on harnessing the energies of New India," defence minister added.

“I would like to congratulate the Hon’ble FM for a growth propelling budget with significant thrust on enhancing competitiveness, infrastructure development, holistic digital drive and promoting financial inclusion. The proposed New legislation for SEZs with states as partners coupled with heightened emphasis on the seven engines under PM Gati Shakti initiative should pave way for a New India that is recognized for its Speed, Productivity and Scale; thus, boosting the country’s overall investment attractiveness and export competitiveness.

Aligned with the Hon’ble Prime Minister’s AatmaNirbhar Bharat agenda, the Government’s commitment to promote self-reliance and indigenization by leveraging Indian Industry is once again reinforced with the 68% (enhanced) domestic allocation for defence capital procurement. Earmarking 25% of Defence R&D budget for Industry, Start-ups & Academia is a forward looking measure that will pave way for investments in frontier technologies and capability development. Industry in partnership with DRDO through SPV mode for development of critical weapon systems and military platforms is a path-breaking reform that will significantly transform the Indian defence eco-system and lead India to being a net-exporter of defence equipment/platforms.

I should particularly laud the thrust given to new-age technologies and wider adoption of digital platforms in Healthcare, Education, FinTech, Agriculture among others. Exclusive policy on Battery swapping, special mobility zones and incentivizing clean-technologies in public transport should lead to accelerated adoption of Electric Vehicles across the country. The increased outlay towards manufacturing of High Efficiency modules for Solar Power and strong emphasis on Circular Economy transition reinforces India’s commitment to Global Climate Action and Sustainable Technologies.”

The budget reflects Govt’s commitment to strengthen the initiative of Atmanirbhar Bharat. The Defence capital allocation has been increased by about 13%, although a shade lower than the long term commitment of 15% YoY embedded in the Draft Defence Production and Export Promotion Policy. It is satisfying to note a large increase in the allocation for indigenous acquisition from 58% to 68% of capital acquisition budget which augurs well for the growing Private sector in Defence.

The opening up of Defence R&D for Private companies, startups and academia is a watershed reform and much awaited measure. After the withdrawal of weighted tax incentives for R&D by Industry, the Defence Sector has been seeking R&D funding support from the GoI to fuel R&D by the Industry. This will help create IP that will not only cut cost of indigenously developed and manufactured Goods and solutions (saving of ToT and License fees to FOEMs for Make in India with Foreign  IP) but also facilitate Exports that can unconditionally be done with own IP.

I must commend this forward thinking initiative of the Government and this would certainly prove to be a gamechanger in positioning India to emerge as a dominant player in the World defence industry.

SIDM welcomes announcement of setting aside 68% of capital outlay of defence budget for domestic industries. This will sustain investments and attract fresh capacity creation.

Creation of a Nodal Body for setting up Testing and Certification requirements of defence systems and platforms will help domestic industry through faster processes and cost-efficiency.

Allocation of 25% of Defence R&D budget for Startups, Academia and Private Industry is a much-needed reform. We thank Ministry of Defence and Ministry of Finance for this major boost to Research and Innovation.

“It is heartening to see that part of the R&D budget has been allocated to the industry, Start-ups and academia. This will be a positive move in particular to start ups and MSMEs to have their inhouse R&D”.

Thales welcomes the forward looking statements by the Union Finance Minister that seek to strengthen the vision of Aatmanirbhar Bharat. The allocation of 68 percent of the defence procurement budget for domestic equipment in FY23 is a positive step towards self-reliance. Moreover, efforts to foster innovation by earmarking 25% of Defence R&D budget to private firms, start-ups, and academia bode well for all stakeholders and will allow international OEMs to bring more technology into India. We also appreciate the budget's emphasis on collaboration between government and industry, with private companies urged to take on the design and development of military platforms in collaboration with DRDO. These steps will enhance local capabilities and build our expertise at a world class level. We, at Thales, remain committed to strengthen our industrial footprint in India by developing our local teams, futuristic technologies and partnerships in line with the 'Make in India' initiative.”

Ashish Saraf, VP and Country Director for Thales in India

Budget is good news for defence companies especially start-ups. 25% defence R&D allocation to start-ups and academia means MoD will be able to rope in many innovative companies. Dual use technologies/sub-systems like AI, Autonomous robots, Drones, sensors etc will get developed. These can go to multiple systems.  These measures will have two very positive effects. Firstly, centres of excellence in various domains/technologies will get created. More importantly, with design to be done in-house large companies, DPSUs, MSMEs, Start-ups will have much deeper collaboration. This will be a win-win. We in India are good individual musicians, time to have a nice orchestra.