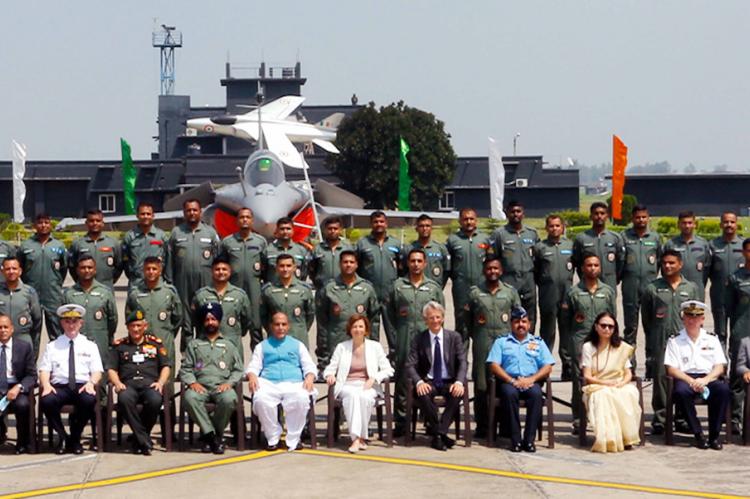 Speaking on the occasion, Raksha Mantri said the induction of Rafale was historic moment and a very important milestone in the history of the IAF. He said, the Rafale deal was a game changer for India’s national security and its induction is a strong message for the world and especially for those who challenge India’s sovereignty.  Shri Rajnath Singh reiterated the resolve of not compromising India's sovereignty and territorial integrity under any circumstances and the country’s determination to make all possible preparations for it. “The intentions of military are as strong as it can be” he said. Raksha Mantri also said “strengthening our defence is aimed at achieving international peace and stability and we do not want to take any step that can endanger international peace. We have the same expectation of our neighbours and other countries of the world.”

Talking about the priorities of Prime Minister Shri Narendra Modi, Shri Singh said national security has been a major priority of the Prime Minister, and it is the result of his vision that we are seeing today despite many obstacles that came in the way.

Terming that the Rafale induction reflected close India-France strategic relations, Raksha Mantri said “we have cooperated closely in a number of areas to enhance our defence cooperation. As part of the transfer of technology agreement, 6 Scorpene submarines are being built at the Mazagaon Docks. On the basis of this partnership, the first submarine, INS Kalvari was commissioned in 2017.” He also highlighted the Indo-French cooperation in dealing with common challenges like maritime security and piracy in the Indo-Pacific region and IOR.

Raksha Mantri also pitched for French investments in the Indian defence manufacturing sector. He said in response to the call for 'Self-reliant initiative' by Prime Minister, Shri Narendra Modi, many policy reforms have been initiated such as manufacturing of defence equipment under the strategic-Partnership model, enhancing FDI up to 74% by automatic route, establishment of two defence corridors in Uttar Pradesh and Tamil Nadu and reforms in Offsets. “I am confident that French defence Industries will take advantage of this and France will continue to be our partner in our journey of indigenization”, he said.

Raksha Mantri congratulated the IAF personnel for the swift and decisive action taken by them near LAC recently. He said the rapid deployment of IAF assets at forward bases created a trust that our Air Force was fully prepared to meet its operational obligations. Shri Singh also lauded the contribution of IAF to the country’s efforts during Covid-19 pandemic.

Ms Florence Parly Minister of the Armed Forces of France in her address said today’s induction of Rafale into the IAF is a symbol of strong ties between the two countries which is rock solid and time tested. She said now, in military terms, India will acquire a world class capability that will give New Delhi an incredible sovereignty and in strategic terms it will give India an edge over the entire region to defend itself. She also assured timely delivery of the 31 remaining aircrafts. Ms Florence Parly also said France is fully committed to the Make in India initiative which has been a reality for French industry for several years particularly in defence sector like in submarines.

The first five Rafale aircraft which arrived at Air Force Station, Ambala from France on 27th July 2020, would be part of 17 Squadron, the “Golden Arrows”.

Before the ceremonial unveiling of the Rafale, a traditional ‘Sarva Dharma Puja’ was performed.  There was an Air Display by Rafale and Tejas aircraft as well as by ‘Sarang Aerobatic Team, followed by a traditional water cannon salute to the Rafale aircraft. After the ceremonial events the Indian and French delegations also had a bilateral meeting.

Earlier this morning, Ms Florence Parly, Minister of the Armed Forces of France was given a ceremonial Guard of Honour on arrival at Delhi.