China has released its new defence white paper titled “China’s National Defense in the New Era”. This is the 8th white paper on defence since 1998 when the first one was published. An analysis of 8 white papers indicates how Chinese thought on world situation and the security and military capability that they need to develop has evolved and is evolving. The analysis also indicates a long-term goal setting as well as the evolution of the goals and objectives by China when it comes to their evolving role in the world scenario. Potentially their path towards a new type of superpower by 2049 that is the stated goal of the Deng’s reforms started around 1978 can also be indicated from this analysis.

The 2019 paper calibrates the current international situation as an increasingly multi-polar world with economic globalization and developing cultural diversity. If one contrasts this with 1998 paper which claimed (see Table 1) that there is a sustained tendency towards multi-polarity and economic globalization, one can see that in Chinese view a multi-polar world has been established. In 2002 economic globalization and multipolarity it was developing, it deepened in 2004. By 2008, China declared that it cannot “develop independent of the rest of the world” and “World also needs China”. 2011 paper declared multi-polarity as an irreversible movement. 2013 white paper states it is “intensifying”. 2013 talked about historic changes that became profound changes in 2019.
One should read the white papers to see how China increasingly became confident, calibrated and convinced in the movement towards its so-called “peaceful rise”. However, we should have no doubt that China is in a deeper, long-term and strategic game of re-ordering of world power to be controlled and commanded by China at the pole position.

1991 Gulf-War displayed modern military prowess announcing the arrival of a Uni-polar world. The single power at the top dictated its goals of globalization and “establishing-democracy” as the operational mechanics for creating or maintaining the world-order. A decade later, 9/11 demonstrated what “have-nots” can unleash.  The US then was engaged in a war-on-terror. That focus led the US to miss out the rise of new power – the People’s Republic of China. Rather the US considered China as an extended economic system of the free-world albeit with different characteristics. That China was able to hide its long-term designs from the USA, because of America’s intellectual opaqueness or the fascinating Chinese ingenuity, or sum of all these factors, we may not know.  US could not see the continuous Chinese surge to replace the US as a superpower, the hundred-year marathon.  Since 2013, China under the new President Xi, has evolved a new initiative of reviving the ancient silk routes termed Belt and Road Initiative (BRI). If the US wanted to export democracy as a free economic system in the1990s, China wants to export its infrastructural connectivity with Chinese characteristics of co-development, as they term it, to the world at large. However, the initiative is developing into a potential strategic geopolitical game-plan for the next 30 years of the marathon.

An eminent Chinese scholar - Yan Xuetong states that the ongoing trade war between not so sincere and genuine friends – US and China - since 1998   indicate that the world is headed towards a Bipolar Order that is different from the cold war of the past in many aspects. New Bi-polar order is emerging that may rapidly become a new type of unipolar world under China, which is what China is aiming at. 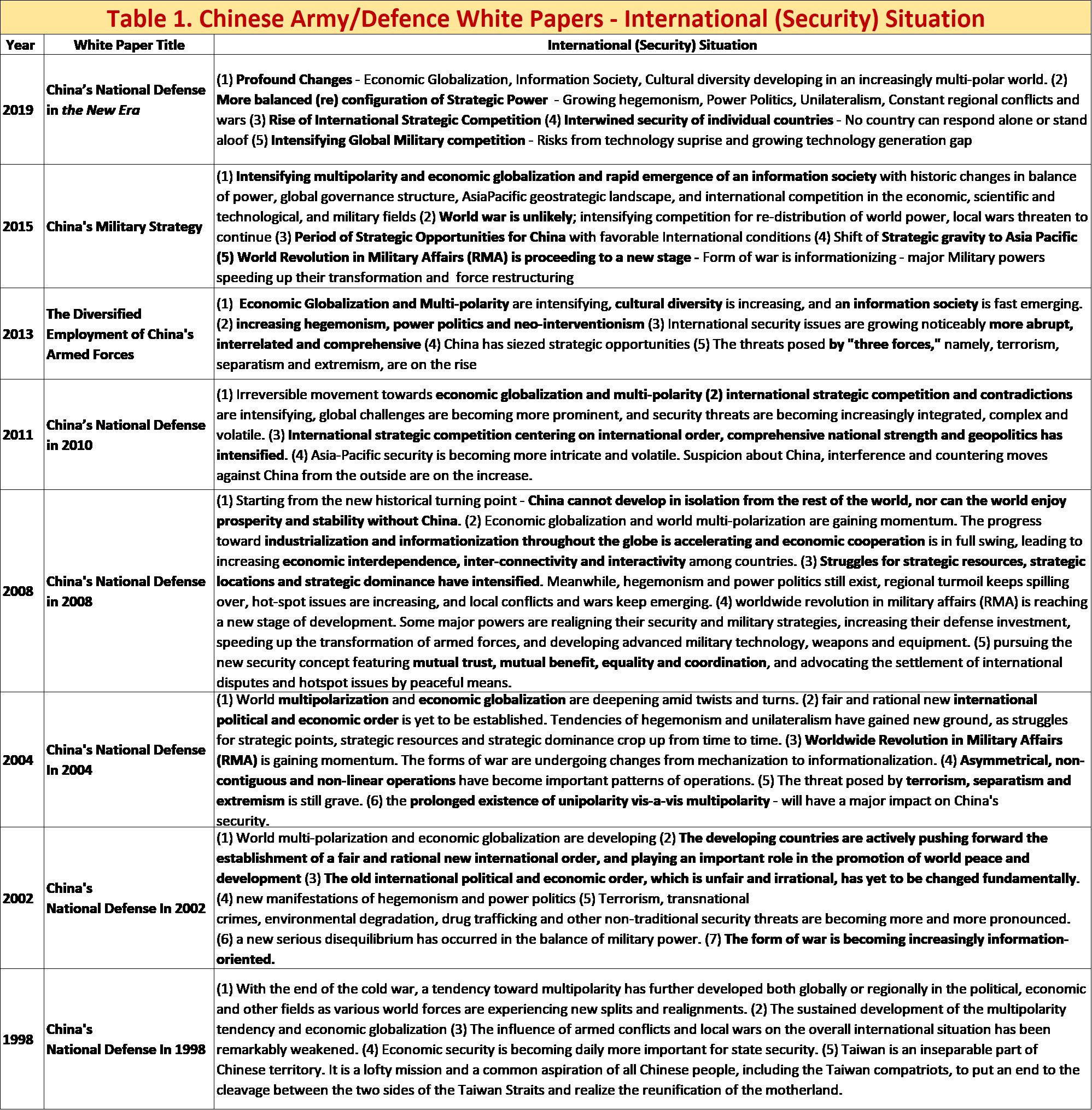 The 2019 white paper sets specific goals for Chinese military transformation that started in the 1990s as “mechanization of the military”. The white paper proclaims that this goal will be completed by 2020. Further, it states that “informationization” of the military will also be substantial by 2020 to be completed by the year 2035. By 2050, China will fully transform its forces to be “world-class forces”. The paper also predicts that “War is evolving in form towards informationized warfare, and intelligent warfare is on the horizon”. The “informationized” to “intelligent warfare” will be driven by a “new round of technological and industrial revolution” through technologies such as “artificial intelligence (AI), quantum information, big data, cloud computing and the Internet of Things” in the military field. There is a transformation of warfare in the “information society”– Mechanization to informationization to upcoming “intelligent” warfare. 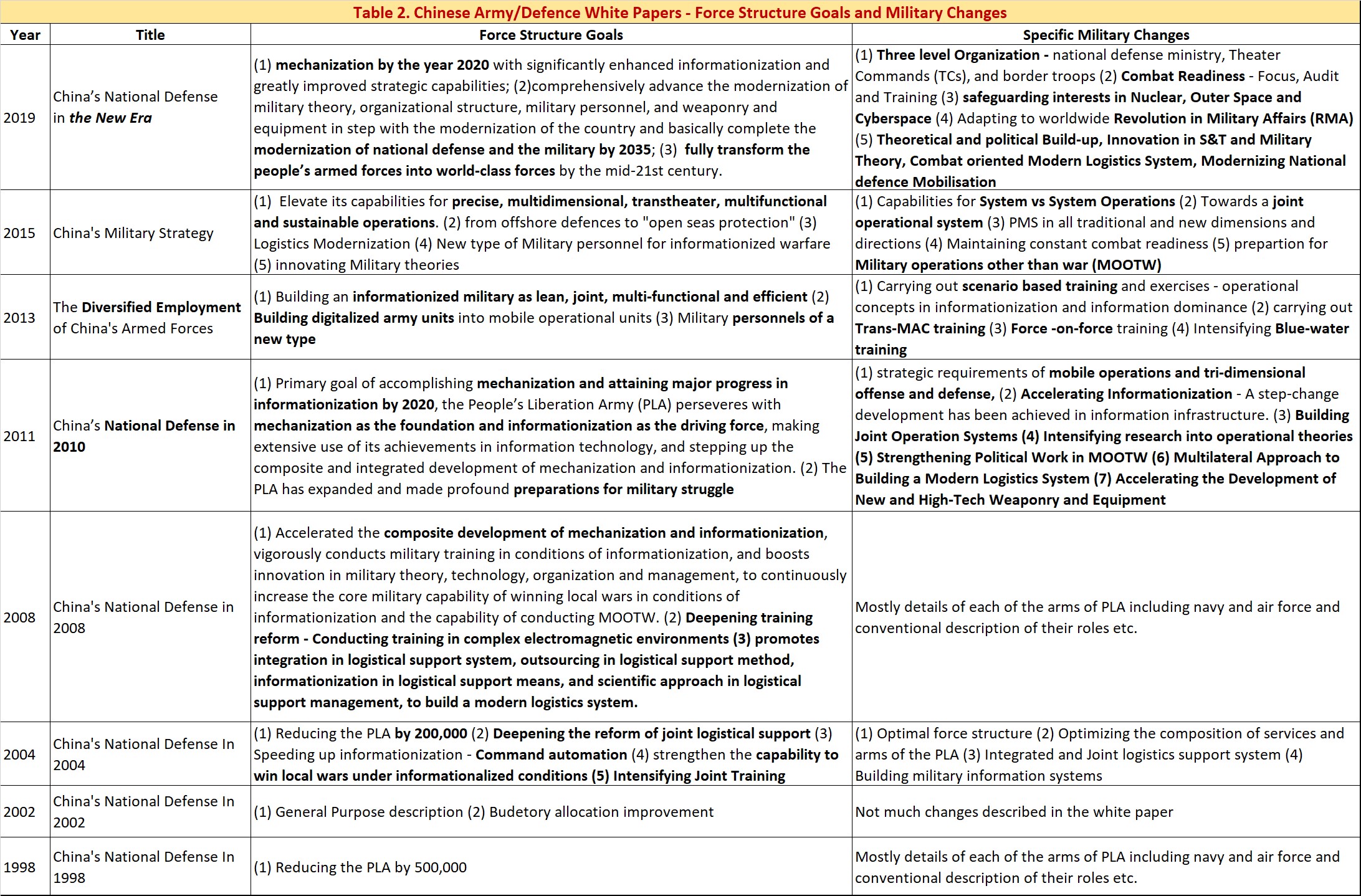 An analysis of force structure goals and military changes as per these defence white papers – one can see the focus in the 1990s and early 2000s was on streamlining the mainly “manpower” driven and based army structure towards what China termed “mechanization”. Substantial manpower reduction of People’s Liberation Army (PLA) was achieved. There was an emphasis on winning “local wars” under conditions of informationization. The 2008 defence paper can be termed as a new understanding of a composite development of mechanization and informationization.

Absolute focus on training. Also, integrated logistics system came into focus. Logistics system has always been a focus area for China in all these white papers. 2008 paper marks a step-change in the fusion of mechanized and information operations and potential integration of logistics systems. 2011 and 2013 defence white papers indicate this fusion and composite structuring or restructuring of the defence forces. Since 2013, China is transforming its armed forces into a new type of force – a movement toward digitalized army units with military personnel of the new type. It can be gleaned that the awareness of different capabilities needed to operate in the new environment which is increasingly a composite of mechanization and informationatization has been factored into hiring a new type of military soldiers and also training them on new skills demanded by the new type of military.

2015 paper changed its flavour towards “elevation” to precise, multi-dimensional, trans-theatre, multi-functional and sustainable operations. This is the language of global power, ready for global military operations. Since 2013, Navy has become the key force component and 2015 white paper marks the re-organization of Chinese defence for global operations.
2019 paper talks about the next transformation of warfare into “intelligent” war. We are in for a Global Chinese military which will be substantially informationized and also would have built intelligent war components.
All the 8 defence white papers emphasize the Chinese military and defence going through or adapting to the worldwide “Revolution in Military Affairs” with Chinese characteristics. It will be useful to understand what are the specific Chinese characteristics that are indicated but not explicitly described.

However, the Deng plan of 1978 and the 1949 establishment of communism by Mao will definitely see a more assertive China with an equally global military force that has evolved rapidly into a transformation never seen in the history before. Effectiveness of the mechanized, informationized and intelligent warfare capable Chinese military is yet to be established in global world power dynamics. One thing though is clear, since the 1990s the transformation has been well-designed and executed with a consistency that is not easy at the scale of the Chinese military.
Lessons for India

India needs to learn three specific lessons from the Chinese evolution – (1) develop its own theory of warfighting and also evolve the theory through own technological roadmaps also force structuring based on the needs of the doctrine and evolution of warfare, (2) Integrated, joint, composite forces with more mechanization, informationization and digitization and next the “intelligent” warfare is the key. However, without our theory, doctrine and evolutionary understanding of warfare and description, it will remain reactive patchwork (3) The substrate that is emerging in the way global power is being restructured will require us to have cohesive politico-military security and power framework that India has been waiting for last 70 years or so. Where is India’s hundred-year marathon roadmap?

NavneetBhushan (Navneet) is a founder director of CRAFITTI CONSULTING (www.crafitti.com) – an Strategy, Technology, Innovation and Intellectual Property Consulting firm focused on co-crafting solutions for global problems. He is the winner of Indira India Innovation award for Entrepreneurship and Innovation Leadership for 2012. He is the principal author of Strategic Decision Making- Applying the Analytic Hierarchy Process published by Springer-Verlag, UK, as part of the Decision Engineering Series. Navneet Blogs at http://innovationcrafting.blogspot.com.He can be contacted at navneet(dot)bhushan(at) crafitti(dot)com