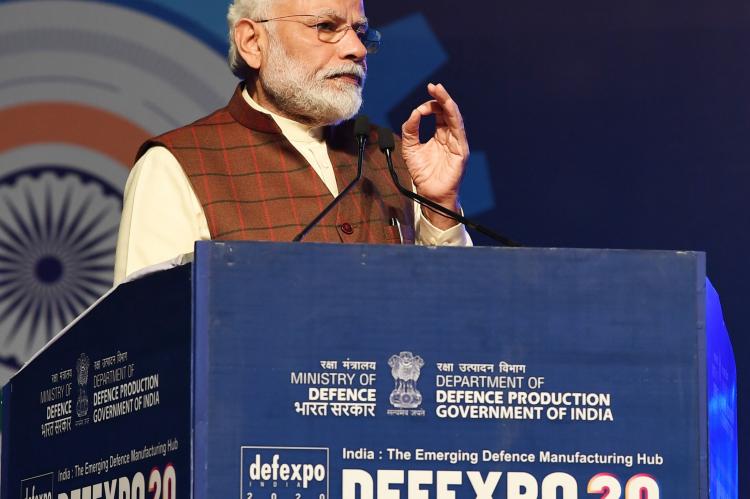 Atma Nirbhayata is a laudable initiative by the Government of India. It is a strong slogan to start the Nation thinking towards self reliance. However, if we take a peep into history, when we got independence, the British left us in an infant state. The Indian industry which was contributing more than a quarter of the Gross Domestic Product (GDP) of the world was in dire straits. The Nehrurian policy thus came into being where the Russian model was adopted, wherein the strategic sectors were state owned and the private sector was kept away. This concept had continued for more than six decades, until the present Government announced certain defence reforms last year. Are we then going to see a change in the performance of our Defence PSUs is a question which is on everyone’s mind today?

In India, the manufacturing sector caters for only 15 percent of the GDP. In comparison, China has 40 percent manufacturing contributing towards GDP. We therefore need to create an environment where the industry can grow. We need to understand that Atma Nirbhayata is not that ‘I” will do everything; it is “we” will do everything. It is an inclusive concept and not an exclusive one. When Larsen & Toubro Ltd took on the manufacture K9 Vajra tracked self-propelled howitzer platform, it had a supply chain of 190 companies. Mahindra & Mahindra today has a supply chain of 130 vendors. The defence Public Sector Undertakings (DPSU) also need to increase their vendor base and incorporate Medium, Small, Micro Enterprises as collaborators. There is a need to hold hands with the private industry. The roles of the private sector need to be enhanced. The public and the private sector need to synergise their efforts and embrace technology and thereby innovate to become more competitive.

Today, the challenges being faced by the defence PSUs are many. The most important of these being - management of infrastructure, management of the work force, up gradation of processes and adoption of high end technology. If these are looked into in the right earnest, we could see a new dawn in the revival of our defence industry. We may also review the performance of some of the non performing defence PSUs and if required consider disinvestment or a merger with the private sector.

It is rather unfortunate that even after five years of “Make in India”, we have yet to conclude any major strategic partnership programme with any original equipment manufacturer (OEM). It needs to be understood that competition is the name of the game. With the DAP 2020 and DPP 2016 coming about, we have been presented with an ocean of opportunities towards giving an impetus to indigenisation. This opportunity must be seized and the “Project Management Unit” and “Technology Assessment Cells” as outlined in DAP 2020, must evolve themselves as centres for excellence and push the agenda for defence modernisation.

Recently, in a boost for indigenous manufacturing of defence and aeronautical equipment, the Maharashtra government has approved defence and aerospace clusters at five places across the state. The policy approved by the state cabinet is expected to create one lakh jobs with around Rs 15,000 crore being invested in the initial years. The defence sector in India largely depends on imports. The need of the hour is import substitution and local manufacturing.

The Ordnance Factory Board (OFB) must get its act together. The staggering overheads must come down. We have also yet to hear further after the announcement of corporatisation of OFB was announced last year. This process must be completed in a systematic and time bound manner to draw dividends from such a restructuring. With the coming up of defence corridors, some of the ordnance factories could re-locate and consolidate in these locations as functioning from far flung areas is logistically counterproductive and uneconomical.

India is likely to spend around 130 billion US dollars on defence modernisation in the coming seven to eight years. This opportunity could be exploited by both, the Public and the Private sector. In due course of time, the PSUs have to move out from the licensing manufacturing regime and create their own “Islands of Excellence” and integrate these through information/design highways. A few private sector organisations can be given an access to these highways. The IPR issues could be handled through oversight committees.

Innovation for Defence Excellence (iDEX) is seeing the Army, Navy and the Air Force developing about 10 projects each. Idea Forge demonstrated “swarm” drones in Jan 2021 within months. However, projects in critical joint functional areas like communications and imagery, presently being progressed individually by the Services, should be taken up as joint projects.

Areas for Modernisation ( compiled by Centre of Joint Warfare Studies)

Missiles and BMD - We need to carry out early operationalisation of BrahMos-2 and Shaurya with a 750-1,000 km range should be expedited. Indigenous Ballistic Missile Defence and the proposed National Advanced Surface to Air Missile System (NASAMS) should be prioritised. In view of the long range conventional ballistic missile capabilities of our adversaries, Pranash (200 km) should be operationalised, to ensure the desired proportionality and reciprocity.

Air Domain - Pending the operationalisation of AMCA (10 years), voids should be addressed on priority by inducting additional MMRCA, upgradation of MiG-29, AEW&C, Refuellers, Heron-TP armed drones and Ghatak Combat drone should be expedited. Intelligence Surveillance Targeting and Reconnaissance (ISTAR) under acquisition from the US, should be fast-tracked. This system, which provides a COP for targets on ground as well, should be a Joint Tri-Service Project, for optimal multi-domain exploitation.

Impetus to Research and Development

Another issue of importance is our capability for “Research and Development”. Today, the transfer of technology in all our acquisitions is limited to processes only. Therefore, research must be given its due importance. Since the last twenty years, we have been spending only 0.7% of our GDP towards research and development whereas countries like USA and China allocate 3-4% of their GDP. This has to change. We have to incorporate disruptive technologies in our processes such as artificial intelligence, quantum computing, block chain, robotics and so on and increase our allocation to R&D to at least 2% of the GDP.

To give a further impetus to this overall perspective, we would have to get our educational institutions on board. There is a requirement to have Defence and Aerospace included as subjects in the main curriculum of universities. The United States has even gone a step further by establishing a “Defence Acquisition University”. It is therefore time for us now to start thinking on such a process.

If we have to move towards Atma Nirbhayata and give our defence indigenisation a momentum, then actions at various levels have to be initiated. The steps need to be taken incrementally and dedicated and progressive allocation of budget towards the same is required to be made in case we want to see a definite change. “The path is long and steep but we have promises to keep, and miles to go before we sleep.”