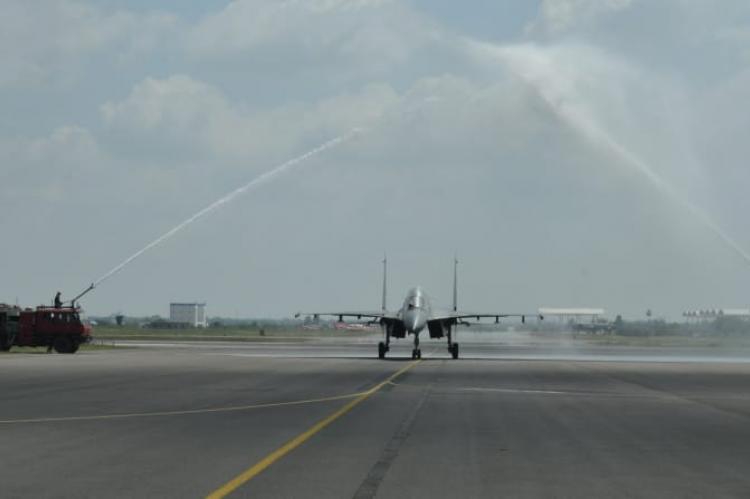 To counter emerging threats from China in Indian Ocean Region, India, on Monday, inducted recently resurrected 222 Squadron, the Tigersharks, with Sukhoi 30 MKI armed with air-launched cruise missile (ALCM) BrahMos at the Air Force Station Thanjavur. The Indo-Russian all weather BrahMos ALCM will allow the Su-30MKI to destroy any adversary naval ship at a distance of 290 km.

Calling the Su-30-BrahMos combination ‘a game changer’ Chief of Defence Staff Gen Bipin Rawat, while addressing the event, said that it will extensively enhance the security of the Maritime domain.

“The Squadron will be operating closely with the Indian Army and Navy to get the ball rolling in jointness of the Indian Armed Forces,” he added.

In his address, Air Chief Marshal RKS Bhadauria, Chief of Air Staff, spoke of the decision to choose Thanjavur as the base for induction of the SU 30 MKI squadron because of its strategic location and complimented Southern Air Command and all personnel of AFS Thanjavur for their efforts towards advancing the induction of the squadron by almost a year.

The Squadron is expected to get all its 18 aircraft within this year.

This induction makes BrahMos, operational with all the three services, the only missile in Indian arsenal which can be launched from ship, land and air. India began testing the ALCM version in 2017 and the integration was declared completed after the successful test against a sea target on December 17.

India is expected to modify two squadrons of Su-30MKI to carry BrahMos missiles. India is also developing a shorter and lighter (mini version) BrahMos-NG which is expected to arm LCA Tejas.

India and Russia are working towards a 600 km range and hypersonic version of the missile.