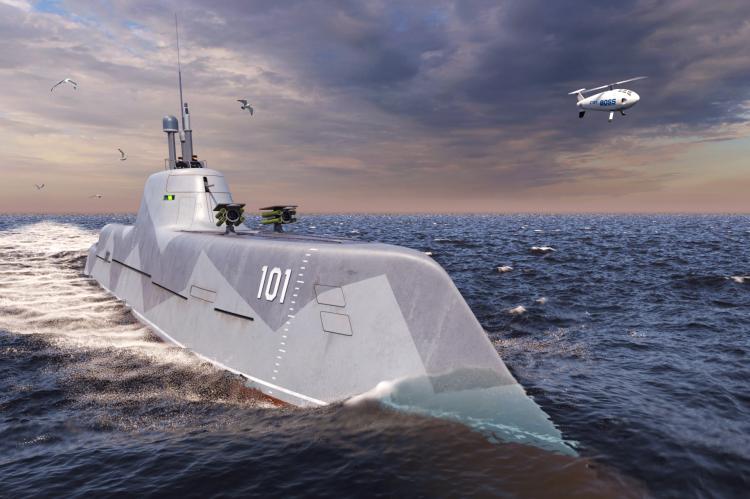 Rubin, Russian submarine designer, has come up with the second version of BOSS (Border and Offshore Submersible Sentry) submersible patrol ship that combines the benefits of a submarine and a surface patrol ship.

Sonar array in the bow bulb works in better conditions and the bulb itself reduces surface drag. High-power propulsion system allows speed up to 21 kt.

In its architecture and outline, the ship resembles Whiskey-class submarines (Project 613) - the most numerous series of the Soviet submarines, very popular with foreign customers. Basic parameters were 1000 tons and length of 60-70 metres

This version 2.0 is armed with auto cannon, two guided-missile launchers and four 324 mm torpedo tubes. This weapon package gives BOSS a formidable capability against even larger capital ships. As in other versions, this ship has two pressure-proof multi-functional hangars for boarding teams boats and equipment, unmanned aerial vehicles or other payload.

Both radar and sonar can be used for search and target acquisition, allowing discreet detection and approach.

It can be used in anti-submarine exercises and training of crews for conventional submarines. The cruising range is up to 4000 miles at 10 kt, and can be increased on Customer’s request.

As military budgets decrease due to pandemic, Navies’ demand shifts to multi-functional ships.

Our response to this challenge is a combination of surface and underwater capabilities in the BOSS project. Due to such synthesis the ship intended for peacetime use retains its relevance as a combat unit in case of a conflict escalation. Moreover, the diving capability allows BOSS to fulfill typical patrol duties in its own innovative ways, some of this ways being cheaper and simpler.

The BOSS project is developed as adaptable, its modifications and variable characteristics allow to offer the ship that corresponds to the Customer’s needs, conditions and capabilities to the maximum eхtent.