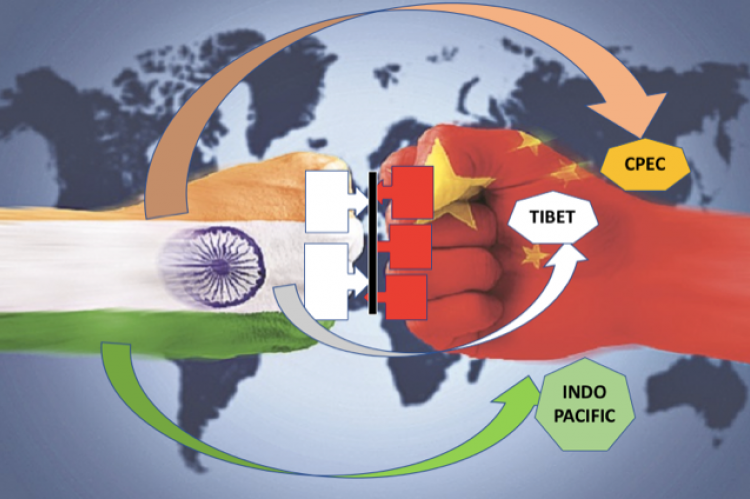 The failure of the numerous military and diplomatic level talks to resolve the Line of Actual Control(LAC) impasse of the Chinese intrusion into India’s territory has added complexity and deepened the dimension of conflict resolution to Apr 2020 status.

Both sides have built up well-entrenched forces and defensive structures making a military option both time and cost-prohibitive. The crisis is here to stay for a much longer time as the stakes are beyond just territory and more to do with the loss of national prestige and clash of the will of two nations seeking regional power pedestal, both led by strong political personalities.Thus any future talks with unchanged response narrative will have its limitations with receding chances of success.

The strategic and geopolitical intent of Chinese incursions, its place, time, information and force application needs to be seen beyond the myopic tactical territorial canvas. Chinese geopolitical intent is to stymie and retard India’s rise as a competitor, its ways are through coercion and diminishing India’s regional and global stature, and thus forcible alteration of LAC is just one of the means with attendant high visibility strategic communication.

These define the “Ends, Ways and Means” of the Chinese strategic power play, which merits greater insight by the Indian national security decision-making apparatus. Thus the counter strategic and operational narrative by India needs to go beyond the present predictable tactical attrition model and adopt an unpredictable low-cost high payoff operational and strategic manoeuvreistic approach to raise the geopolitical cost of incursions by the Chinese. Strength must be pitched against the adversary’s weakness especially when combat asymmetry prevails both in quantum and technology.

More importantly, India needs to take stock of its comprehensive national power and capacity to stymie the Chinese power play through a strategic long term recalibrated China Policy. The Dragon has already unlocked the doors of competition leading to confrontation threatening conflict. It is thus time to unleash a calibrated China-specific response narrative of strategic compellence.

The recent statement by CDS of the possible military option if talks fail is a welcome strategic communication from the office of DMA which otherwise seemed burdened with greater administrative loads and NSA and his NSCS becoming the de-facto predominant national security decision-making hub.

The absence of a National Security Doctrine and National Command Post under the CDS has further added to the strategic security woes.The statement must,however,be seen in the light of the strategic and operational realities and evolving geopolitical dynamics in COVID times. Any such bold statement thus needs to be backed by multi-domain capability, empowered structures, technological solutions embedded in demonstrated credibility and political will, in time and space domain, with clarity of achievable end state and the definable notion of victory.

As the Ladakh quagmire enters its fourth month the Chinaman is militarily negotiating from a position of advantage still holding on to the Indian territory. The large-scale territorial aggression and unprecedented buildup of forces all along Indo -China border, the territorial claims in Bhutan (West of Twang Sector), the Chinese orchestrated Nepalese claim of Indian territory in Pithoragarh District and the Pakistani build up in Gilgit and Baltistan under the pretext of ensuring law and order, define the Chinese coercive intent and the larger geo-strategic canvas.

The lack of Indian strategic orientation to focus on the primary threat, inability to differentiate between routine transgression and intent-driven intrusion leading to surprise, reactive response and foregoing opportunities of counter gains in time and space have indeed proved costly.The present reality is that with well-entrenched forces neither nations can achieve their politico-military aims through conflict especially while still reeling under the fall out of COVID.

Yet at the geo-strategic and operational level Chinese internal and strategic fault lines lie exposed. The operational and strategic focus thus needs to be realigned from the present model of Attrition Warfare to a more relevant model of Manoeuvre Warfare by focusing India’s strength on Chinese vulnerabilities.“Winning Without Fighting” a Sun Tsu stratagem must result in Chinese having a taste of their own medicine.

Similarly, disruption by focusing its strength on Chinese numerous vulnerabilities and fault lines would pay dividends. Tactical eviction a much spoken military option must thus give way to the preferred operational and strategic dislocation and disruption at time and place of choosing, thus empowering a diplomatic and political resolution.

Adequate targets and soft spots exist in time and space for turning the tide and reversing the fronts. It is unlikely that the well-entrenched Chinese will relent easily unless the logjam is made geo-strategically and politically cost-prohibitive and a face-saving option visible. India must thus create counter leverages by recalibrating its response narrative to get inside and dominate the OODA (Observe - Orient -Decide- Act) loop and gain the lost initiative.

The focus must shift from the contact battle to operational and strategic domain both military and nonmilitary in a whole of nation approach. Dislocation by way of militarily creating counter friction points in Sikkim and Central Sector, diplomatically creating counter leverages like QUAD, politically downgrading diplomatic relations and calling for a UN resolution against Chinese expansionism are only a few options.

Disruptions can aim at covert targeting CPEC, fueling unrest in Tibet, supporting Taiwan and Hong Kong etc. The key aspects of exploiting the Chinese strategic and operational spatial fissures be it physical or/and mental, in a defined time frame and with desired force, must find focus. India must exploit Chinese weaknesses to its advantage; a head-on slog match is no more a solution.

The cost-benefit of the incursions must be made cost-prohibitive for the Chinaman even if it means exhausting the PLA through the winter and diminishing his strategic payoffs of continued occupation, by resolute political, diplomatic and economic offensive while expanding the scope of military preparedness to give credibility of intent.

Thus counter friction points must be created in the meantime both kinetic and non-kinetic by overt and covert means at the tactical, operational and strategic level for required leverage. The Dragon must be made to realise India is no walkover, politically, diplomatically, economically or militarily. It must reflect and take cognizance of what their revered Sun Tzu said in the historic Art of War - “He who wishes to fight must first count the cost”.

The Chinaman respects strength and will only seek the end of this impasse as much as India when its strategic coercion is countered by strategic compellence.

At the national level, credible measures in the fields of economy and trade, like banning of Chinese Apps, restrictions on award of contracts for infrastructure and investments from China and visa restrictions have already been undertaken, yet much more needs to be done to stymie the Chinaman. India must improve its regional and global strategic partnerships in both bilateral and multilateral contexts, foundational on common aspirations of growth and countering threats altering strategic equilibrium.

The new found Russia China bonhomie is also developing fissures and India must balance its US - Russia strategic relationship to its advantage. China must realise it needs India more than India needs China and thus be favourably inclined to a reconciliation of the LAC impasse and revert to Apr 2020 status.There by the strategic intent of China must be stymied by a matching strategic counter-narrative by India.

China’s periodic forays in peacetime to undermine India, will continue in the future too. They will have to be countered by matching resolve, demonstrated capability and denied any psychological gains with credible military deterrence, agile diplomacy and astute political decisiveness. India must embrace the tenets of manoeuvre warfare at the strategic, operational and tactical level and shun the present attritionist mindsets.

India must make the cost of any such Chinese misadventure prohibitive. This would be an important aspect of strategic messaging and desired end state in itself for India. At the national level, India needs to build its “Smart Power” by optimising its resources into a successful national security strategy through the intelligent integration and networking of defence, diplomacy and development along with other tools of hard and soft power. Indeed the Dragon must be made to recoil with least cost and in minimum time.