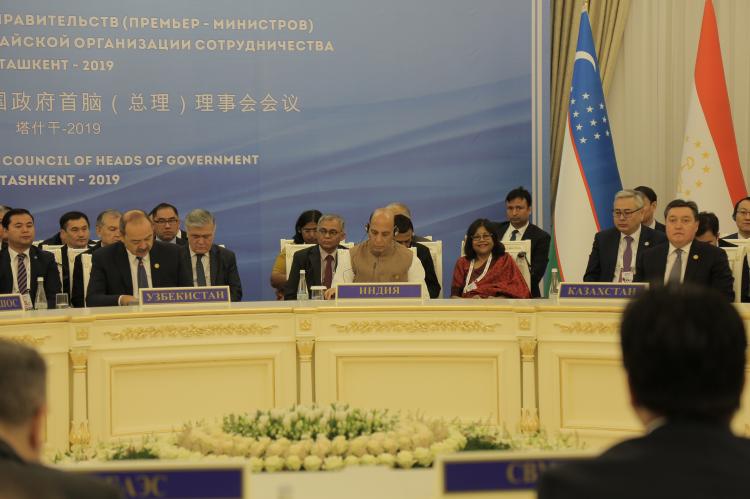 Raksha Mantri Shri Rajnath Singh participating in the meeting of SCO Council of Heads of Government (CHG) at Tashkent, Uzbekistan on Saturday, November 2, 2019.

Raksha Mantri Shri Rajnath today called for isolating all nations that have adopted terrorism as their state policy and affect the world in one way or the other. Raksha Mantri was speaking at the ‘Curtain Raiser’ of the first-ever India-Uzbekistan Joint Exercise ‘Dustlik 2019’ at Tashkent in Uzbekistan in the presence of Defence Minister of Uzbekistan Major General Bakhodir Nizamovich Kurbanov.

“Terrorism is a global problem. There are many examples where some countries have adopted terrorism as their state policy. The need of the hour is to condemn and isolate such countries,” said Shri Rajnath Singh.

Describing ‘Dustlik 2019’ as an example of the growing defence collaboration between India and Uzbekistan, Raksha Mantri expressed confidence that the soldiers of the two countries will stand shoulder-to-shoulder in the time of need.

Shri Rajnath Singh termed defence cooperation between the two countries as ‘crucial’ to the overall bilateral relations that have witnessed tremendous growth in the last few years. He assured the Government of Uzbekistan that Indian Armed Forces will provide all possible assistance to their Uzbek counterparts for their modernisation and capacity building. Shri Rajnath Singh promised India’s enhanced support to Uzbekistan in Military Medicine, saying that the MoU signed after his bilateral meeting with the Defence Minister of Uzbekistan is a step in the direction.

Raksha Mantri affirmed India’s commitment of developing a state-of-the-art IT complex in Armed Forces Academy of Uzbekistan for the benefit of their soldiers. “We will send a team of expert IT professionals and English language instructors to share their expertise with the students of Knowledge Academy,” he added.

Identifying ‘Military Technical Cooperation’ as an area of huge potential, Shri Rajnath Singh said, India is always ready to share its accomplishments and achievements with Uzbekistan in this field. He expressed confidence that both countries will benefit from this cooperation.

Shri Rajnath Singh expressed hope that ‘Dustlik 2019’ will be a grand success and the Armies of both countries will demonstrate the highest degree of professionalism during the exercise. He invited the Armed Forces of Uzbekistan for the Joint Exercises in 2020 in India.

‘Dustlik 2019’ will be conducted from November 4-13, 2019 at Chirchiq Training Area near Tashkent. In the exercise, an Indian Army contingent will train along with Uzbekistan Army. The exercise will enable sharing of best practices and experiences between the Armed Forces of the two countries and would lead to greater operational effectiveness.