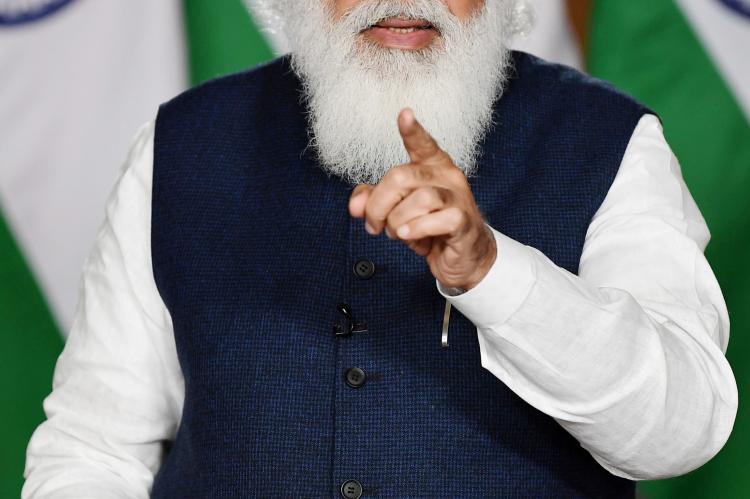 Narendra Modi said that there used to be hundreds of ordnance factories before independence.  In both the world wars, weapons at large scale were exported from India. But, for many reasons, this system has not been strengthened as much as it should have been after independence.

The Prime Minister said that his government has relied on the capabilities of our engineers and scientists on developing the Tejas fighter aircraft and today Tejas is flying gracefully in the skies. A few weeks back, an order worth Rs. 48,000 crore was placed for Tejas.

He said that since 2014, it has been the government’s endeavor to move forward in this sector with transparency, predictability and ease of doing business. Shri Modi said the government has taken steps to bring about de-licensing, de-regulation, export promotion, foreign investment liberalization, etc.

The Prime Minister further said that India has made a list of 100 important items related to defence, which can be manufactured indigenously with the help of our local industries. He said a timeline has been set so that our industries can plan to meet these requirements.

The Prime Minister said that a part has been reserved for domestic procurement even in the capital budget of defence. He urged the private sector to come forward and take up both designing and manufacturing of the defence equipment so that Indian flag can be kept flying high on the global stage.

He said that MSMEs work as a backbone for the entire manufacturing sector. The reforms that are taking place today are giving more freedom to MSMEs and encouragement to expand.

The Prime Minister said that the defence corridors that are being built in the country today will also help local entrepreneurs and local manufacturing. That is, today, self-sufficiency in our defence sector has to be seen as the empowerment of these two fronts – “Jawan as well as Naujawan ”.

In his opening remarks, Raksha Mantri Shri Rajnath Singh hailed Union Budget as a healthy mix of promise, potential and progress. He stressed that forward-looking agenda of the Budget will provide support to the defence and security of the country.

Rajnath Singh said, “The Budget focuses on accelerating economic growth and creating job opportunities to reverse the adverse impact of COVID-19 pandemic with ‘Atmanirbhar Bharat’ at the core.” 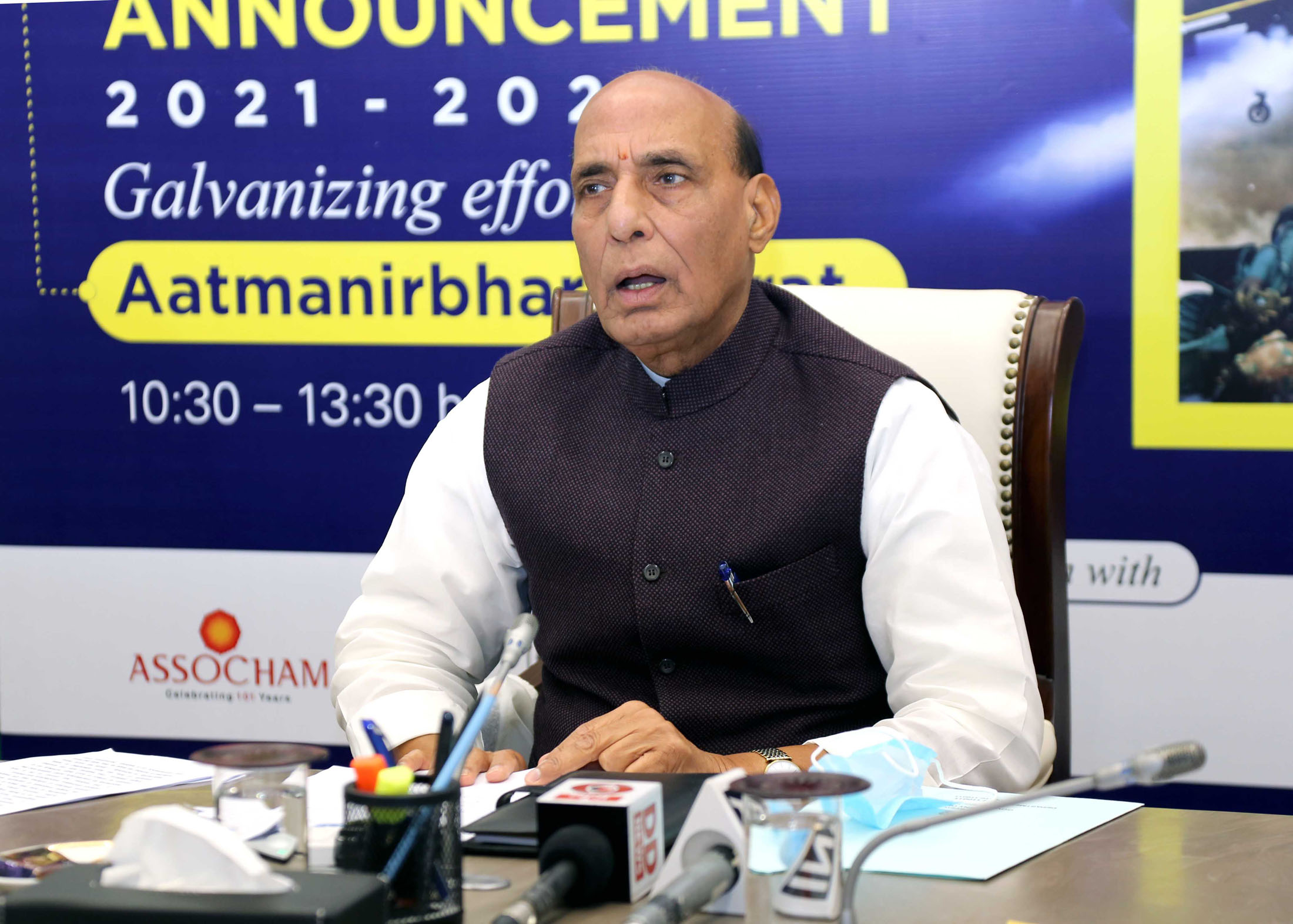 The Raksha Mantri stated that the vision of self-reliant India of the Government defined the approach towards the defence sector in this year’s Budget. The Defence Budget has seen an unprecedented increase of 18.75 per cent in capital outlay over and above last financial year (FY) and 30 per cent the year before, which is the highest in the last one and a half decade.

Rajnath Singh termed threat perceptions, aspirations, capacity & capability development initiatives and technological advancements as major factors that drive procurement decisions in defence. He underlined the close cooperation between the Armed Forces and manufacturers to reduce the gap between the aspirations of the Armed Forces and actual delivery by the manufacturers.

The Raksha Mantri stated that ‘Make in India, Make for the World’ is the only mantra to stay abreast with latest technological advancements and remain frugal at the same time. Emphasising that the defence industry can only thrive by going global, he said, the Government is actively promoting not only domestic manufacturing but also an export-oriented defence industry.

“The most important factor that is going to drive the domestic industry is ‘Atmanirbhar Bharat’,” Raksha Mantri underlined, saying that the Government is willing to deal with higher initial costs to build the defence industry for the future. He added that the focus of the Government is on ‘Ease of Doing Business’ to encourage foreign Original Equipment Manufacturers (OEMs) to set up manufacturing units in India, develop Joint Ventures with domestic defence sector.

Rajnath Singh listed out number of initiatives taken by the Government to promote domestic defence manufacturing. He shed light on the plans to spend $130 billion on military modernisation in the next five years, mentioning about the recent order of 83 indigenously designed and developed Light Combat Aircraft MK 1A, Tejas, worth Rs 48,000 crore, awarded to Hindustan Aeronautics Limited (HAL) during the recently held Aero India 2021. He added that the contract for indigenously designed Light Combat Helicopter is likely to be signed soon.

The Raksha Mantri added that during the current financial year, Rs 75,000 crore worth Acceptance of Necessity (AoN) has been accorded, of which 87 per cent relate to ‘Make in India’. He stated that the Ministry is also working on bringing down the delays in timelines of capital acquisition.

Rajnath Singh added that MoD has planned to channelise about Rs 1,000 crore during 2021-22 for procurement from Innovations for Defence Excellence (iDEX) start-ups to give a major boost to innovative defence technology and support start-ups base in the country.

The Raksha Mantri said, the initiatives taken by the Government have resulted in staggering 700 per cent growth in defence exports in the last six years. India entered into the list of top 25 exporters in the world, he said, citing data published by Stockholm International Peace Research Institute (SIPRI) in 2020.

Captains of Industry from SIDM, FICCI, PHDCC appreciated the Ministry’s policies for encouraging domestic manufacturing and gave a few suggestions for consideration.

In his closing remarks, Raksha Mantri responding to their proposals, made the following announcements:

2.          The Letter of Intent (LoI) for Light Utility Helicopters (LUH) will be given to HAL so that the helicopters can be inducted into the Armed Forces coinciding with the 75th Anniversary of India’s Independence.

3.          Procurement from private sector will not be limited to 15 per cent but will go much beyond that.

4.          The ‘AON’ contract conversion would be completed within two years under close monitoring.

6.          A “Fund of Funds” worth Rs 10,000 crore has been created for Start-ups and MSMEs. Complete support would be provided to the Defence and Aerospace sector in utilising the fund.

7.          Acceptance in principle would be accorded for at least five Make-1 projects this year.