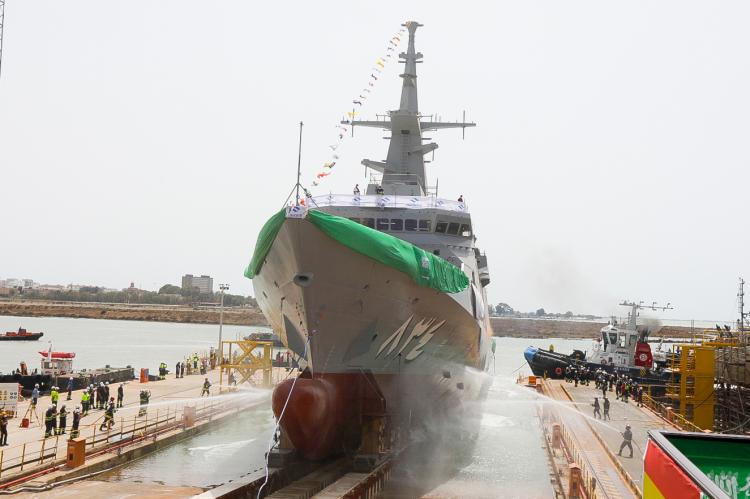 Navantia has launched today the fourth of the five corvettes being built for the Royal Saudi Naval Forces (RSNF), named JAZAN as a tribute to this city in the Southwest of Saudi Arabia.

The event has been attended by the Commander of the Royal Saudi Naval Forces, Vice-Admiral Fahad Bin Abdullah Al-Ghofaily; the Admiral Chief of Staff of Spanish Navy, Admiral Antonio Martorell Lacave; the Chairwoman of Sociedad Estatal de Participaciones Industriales (SEPI), Belén Gualda; the Chairman of Navantia, Ricardo Domínguez; SAMI Vicepresident for Corporate Communications, Wael Alsarhan, on behalf of SAMI CEO, Eng. Walid Abukhaled, who has attended the ceremony remotely, and the Mayor of San Fernando, Patricia Cavada. The ceremony has taken place with strict sanitary protocols due to the pandemic.

The event has begun with a reading from the Holy Quran, followed by videos about the city of Jazan, about the Avante 2200 program and about the building of this corvette. Both the national anthems of Saudi Arabia and Spain have been played. The event has also included welcoming remarks from the manager of the shipyard and head of the Defence Programs in Navantia Bahía de Cádiz, José Antonio Rodríguez Poch.

His Excellency the Commander of the Royal Saudi Naval Forces has highlighted the importance of ALSARAWAT (Avante 2200) project as one of the major and key acquisition programs that clearly indicate the Royal Saudi Naval Forces' commitment to achieving its ambitious goal of developing a new era of innovative and state-of-the-art capabilities aligned with Kingdom’s strategic Vision 2030.

On this special occasion, His  Excellency Vice Admiral Fahad Al-Ghofaily has expressed his sincere appreciation and gratitude to the wise leadership of kingdom of Saudi Arabia for providing unlimited support to the Royal Saudi Naval Forces, without which these successful accomplishments would not have been achieved.

His Excellency has underlined that the launching of HMS JAZAN, the fourth corvette to be launched in just one year, is a significant accomplishment that amply demonstrates Navantia commitment for maintaining the program delivery and striving it success. On that note, Commander of the Royal Saudi Naval Forces has emphasized that the success of ALSARAWAT projects will establish a solid foundation for strategic partnership with Navantia.

His Excellency Vice Admiral Fahad Al-Ghofaily has also expressed his gratitude and appreciation to, Admiral Antonio Martorell Lacave, Chief of Staff of the Spanish Navy for the significant support and remarkable cooperation that the Spanish Navy has provided to Al SARAWAT project.

The Admiral Chief of Staff of Spanish Navy, Antonio Martorell Lacave, has underlined that “this corvette is an unequivocal demonstration of Spain's industrial capability in the field of naval shipbuilding and of its strong commitment to technological innovation”. He has also valued the great effort made by Navantia for minimizing the impact of the Covid-19 pandemic in the execution of this program.

“A clear proof of this commitment, and of the steady progress of the program, is the effort made in the training of the crew of the first corvette. A case in point have been the specialization courses in Combat, Operations, Communications, Navigation and Deck, Propulsion and Electricity, as well as the training on tactical procedures which is currently underway at the Fleet’s Tactical Simulator”, he has said.

Navantia’s Chairman Ricardo Dominguez has stressed the company’s commitment with Avante 2200 program, which he has described as “strategic”, and with Saudi Arabia: “You can count on Navantia as a reliable and trustworthy partner for the sustainment of these vessels over their lifetime and for future opportunities to come”.

Ricardo Domínguez has presented Navantia’s investments in order to introduce digitalization and new technologies in the shipyard and thus enhance its efficiency, “enabling the building of ships in less time and with higher quality”. He has taken the chance to welcome the Saudi crews that have started its training at the recently opened Navantia Training Centre, which is equipped with state-of-the-art technological capabilities.

He has also thanked the Spanish and Saudi Navies and the Ministries of Defence of both countries for their “invaluable collaboration and work in order to make this program a success”. Ricardo Domínguez has commended the program teams and the workers that take part in it: “The quality of the ships and the fulfilment of this milestone according to the schedule is a proof of their hard work, expertise and teamwork spirit in this project”, he has said.

Eng. Walid Abukhaled, CEO of Saudi Arabian Military Industries (SAMI), has said that “SAMI is proud of its strategic partnership with both RSNF and Navantia”. In remarks sent to the participants, he has stressed that “the launching of HMS JAZAN, the fourth out of five Avante 2200 corvettes, will reinforce the capabilities of the RSNF fleet, which highlights the great interest in the naval industries sector and the commitment to developing its new systems and requirements.”

Eng. Abukhaled has said: “SAMI is dedicated to developing Saudi Arabia’s military industries and empowering the indigenous naval technology capabilities, as well as contributing to supporting the Kingdom’s defense ecosystem. This aims to achieve self-sufficiency in the sector by enhancing the RSNF’s technical capabilities. This achievement is consistent with the Public Investment Fund’s efforts through SAMI to localize cutting-edge technology and defense systems and build strategic economic partnerships. SAMI plays a pivotal role in supporting the localization of 50% of the Kingdom’s military spending and enhancing the local capabilities in line with the goals of Saudi Vision 2030.”

Eng. Abukhaled has also expressed SAMI’s profound gratitude for His Majesty the Custodian of the Two Holy Mosques King Salman bin Abdulaziz, and His Royal Highness the Crown Prince Mohammad bin Salman, for their continuous guidance and unlimited support. He also extended his appreciation for His Excellency Vice Admiral Fahad Al-Ghofaily, Commander of the Royal Saudi Naval Forces, for the confidence in SAMI.

At the end of the ceremony, the Commander of the Royal Saudi Naval Forces, Vice-Admiral Fahad Bin Abdullah Al-Ghofaily, has cut the ribbon and the corvette, after receiving the impact of the bottle with water from the Holy City of Mecca, has begun to slide down until she has touched water for the first time. The construction will continue until the delivery to the Royal Saudi Naval Forces in the month of April 2023.

During his visit to San Fernando, Commander Al-Ghofaily has visited the shipyard and the Navantia Training Centre (NTC), where the crew and the mantainers of the corvettes are being trained.

The Saudi delegation has also visited the Land Based Training Site (LBTS) and simulators and has received a presentation on the Technology Transfer (ToT) program that is part of this comprehensive contract.

Corvette JAZAN is the fourth of five corvettes being built by Navantia in the Avante 2200 program. It has a length of 104 meters, a beam of 14 and she will be able to transport a total of 102 people including crew and passengers.

The design of the corvettes is of the latest generation, maximizing the participation of Navantia by incorporating its own products, such as the CATIZ Combat System, the HERMESYS Integrated Communications System, the DORNA Firing Direction, the Integrated Platform Control System and the MINERVA Integrated Bridge, together with other equipment developed by Navantia under license, such as the MTU Engines or the RENK Reduction Gearboxes.

This contract, which came into force in November 2018, strengthens the immediate future of Navantia and benefits all the shipyards of the company and its auxiliary industry, especially the whole Bay of Cadiz.

Specifically, it means a global workload of around seven million hours, that is, 6,000 jobs during five years. Of these, more than 1,100 will be Navantia employees; more than 1,800, employees it the collaborators enterptrises of Navantia and more than 3,000, indirect employees generated by other suppliers. There will be more than 100 companies that will collaborate in this project.

This program, whose last vessel must be delivered in 2024, includes, in addition to construction, Life Cycle Support for five years, from the delivery of the first vessel, with an option for another five years.

On the other hand, the contract also includes the supply of several services such as, Integrated Logistic Support, Operational and Maintenance Training, Supply of Training and Education Centers for the Combat System and Platform Control System of the ships, the Life Cycle Support previously mentioned, and the systems for the maintenance of the ships in the Jeddah Naval Base.