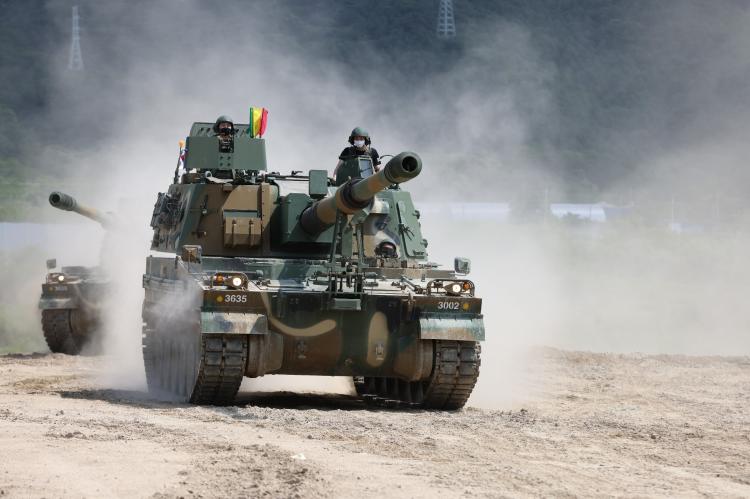 Recently, India has deployed K-9 Vajra, self-propelled artillery on the Indo-China Line of Actual Control (LAC) in the Northern area of Ladakh. The much talked about K9 Vajra – based on K9 Thunder – is the latest artillery gun to join Indian Army. India is expected to buy more of these guns.

As the Gun is making way to one of the most physically challenging military operational areas, the K9 developed, Korean defence major, Hanwha Defense is taking it to the future. According to the Company, the final objective of the development is to make the K9 fully unmanned artillery.

“The K9 capability continues to evolve in a way to satisfy the demands of the concept of future land warfare,” said Yoon Young-ki, principal engineer involved in the K9A2 development project. “The development of a full-automatic ammunition handling and loading system has been very successful to increase rate of fire to nine from six rounds per minute.”

“As the path of growth is based on system evolution, all K9 guns can be upgraded to the latest version,” said Pasi Pasivirta, director of European business development for Hanwha Defense. “This has proved to be an efficient way of fighting obsolescence. All new features will be available for all K9 users.”

Developed in 1998 by the state-run Agency for Defense Development and Hanwha Defense, South Korea, the 155mm/52-calibre howitzer entered service in 1999. The K9 was designed primarily to meet the tactical concept of ‘Shoot & Scoot’- a gun fires salvo of ammunition and moves to next position to avoid counter bombardment.

The 47-ton K9 has a firing range of 40+ km with conventional 155mm ammunition and it can move as fast as 67 km/h per hour. Equipped with an automatic fire control system, the howitzer can fire within 30 seconds from a stationary position and within 60 seconds while on move. A burst rate of fire of three rounds can be achieved in less than 15 seconds, with a maximum rate of fire from six to eight rounds per minute continuously for three minutes.

The Thunder demonstrated its impressive power in November 2010 when North Korea bombarded the Island of Yeonpyeong near the western sea border. A battery of six K9s responded to the surprise attack, firing eighty shells toward the enemy barracks to leave scores of casualties to the North.

As the Thunder was built to operate on the rugged mountains next to DMZ, the vehicle is equipped with advanced hydro-pneumatics suspension to support movement over the rocky terrain. This feature must be coming handy to the Indian Army for high altitude deployment of the guns.

Thanks to its 1,000-horsepower engine, the Thunder features a higher power-to-weight ratio than many other howitzers like the US-built M109 Paladin.

The K10 is the world’s first automatic ammunition transfer system that facilitates ammunition resupply while the respective crews remain protected under armour. Using the same chassis as the K9, the resupply vehicle can resupply the K9 on the battlefield under protection, using an automated bridge to connect the two vehicles. It can hold up to 104 rounds and transfer them to the howitzer at a rate of around 12 rounds per minute.

The Indian version of the K9 ‘Thunder’ is called K9 ‘Vajra’.  In May 2017, India awarded Larsen & Toubro a contract for 100 K9 Vajra, modified Thunder, for India Army’s tracked self-propelled artillery programme. The last of the gun was delivered in February ahead of the schedule.

The ‘VAJRA’ variant - developed by L&T - with India specific features to suit the varied operational requirements of the Indian Army.

The ‘K9 VAJRA’ systems have 80 per cent indigenous work packages and above 50 per cent indigenisation (by value) at the program level. This involves local production of over 13,000 components per system through a supply chain spread across various states of India. 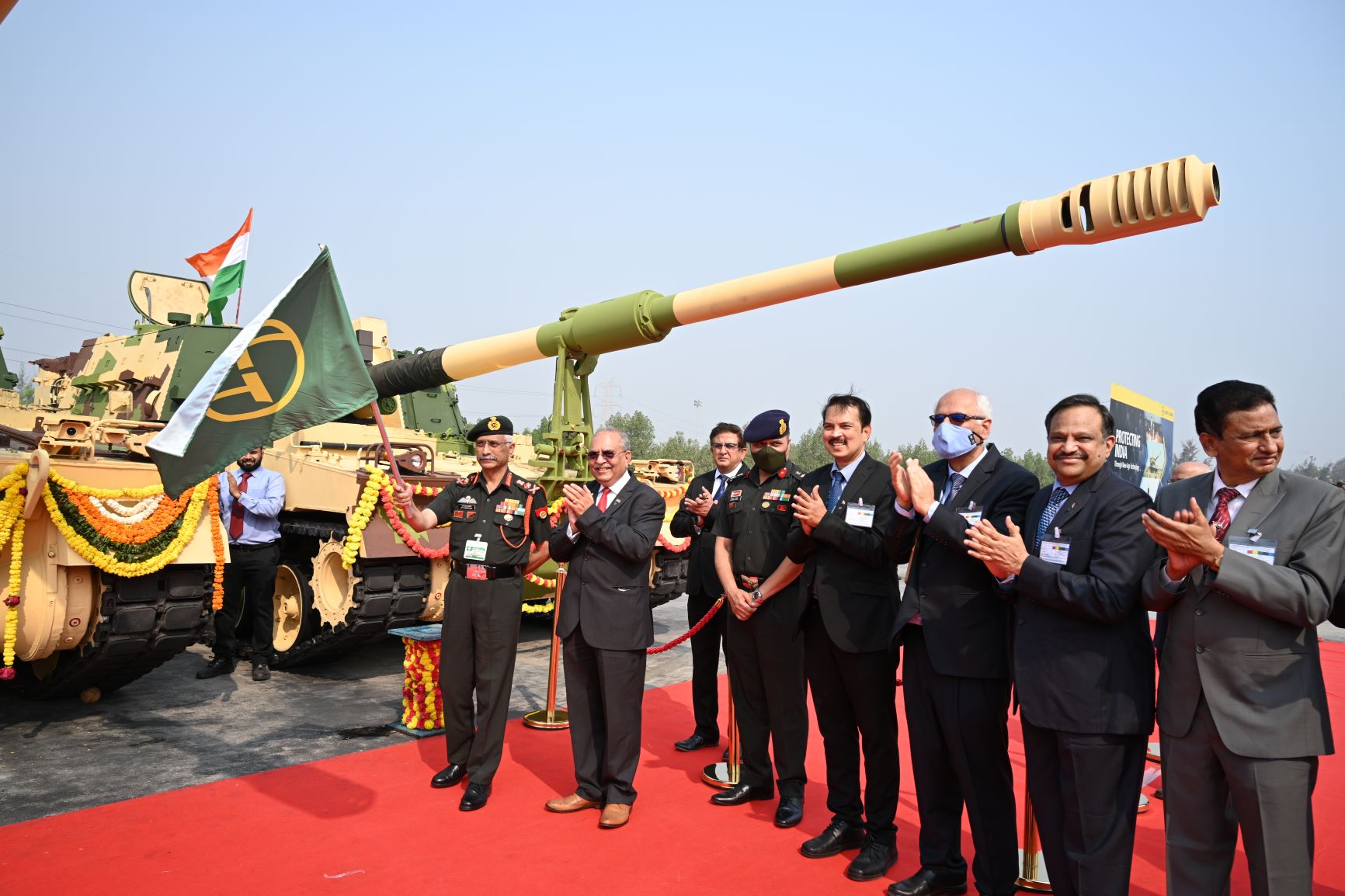 A modified variant, the K9A1 has been in service with the South Korean Army since 2018. The K9A1 is equipped with an auxiliary power unit (APU) that allows vehicle to be operated and fired without running the main engine, which saves the valuable engine hours. Using the APU also means crew members can operate without being exposed to the engine noise.

Other modifications for the K9A1 include the driver’s night periscope with forward-looking infrared cameras that can be viewed from the monitor, and rear-view camera to help ensure crew safety.

By combining the inertial navigation system and global position system, the K9A1 can locate itself more precisely, while the fire control system is upgraded to use an electronic fuse setter and ammunition status control system. The new Fire Control System (FCS) is programmed for ammunition with an extended range of 54 kilometres.

Utilizing a fully automated turret instead of semi-automatic ammunition loading system, the K9A2 will be capable of firing more than nine rounds per minute in a stable manner. The number of crew can be reduced from five to three.

The K9A2 version is expected to be upgraded further over the next decade to extend its firing-range and rate of fire. The subsequent version (K9A3) would be capable of remote-controlled operations. Hanwha desires to develop fully unmanned K9 based on artificial intelligence technology.

Speaking on modification to suit customer’s requirements, Jeff Sung, a spokesman for Hanwha Defense, said, “Besides superior battlefield capabilities, the K9 has an advantage when it comes to operational and maintenance costs, as the artillery is operated on a large scale globally. In addition, the development of modifications to customers’ needs is swift and successful through various localization programs, including local partnerships and tech transfer.”

According to Hanwha, K9 is the global leader in the self-propelled howitzers in the world with some 53 percent of market share. Nearly 1,700 units of the K9 are in service with several countries, including South Korea, Turkey, Poland, India, Finland, Norway and Estonia.

Impressed by K9’s outstanding combat performances, existing K9 customers such as Norway and India are said to be considering buying more K9s. India is expected to order around one more regiment (around 40) guns.

More orders are likely to come, as Australia is in the process of acquiring 30 AS9 “Huntsman” vehicles and 15 AS10 armoured ammunition resupply vehicles. The Australian version is to feature upgraded armoured protection and a beefed-up suspension to cope with the increased weight of the vehicle. Combat weight of the AS9 is understood to be in the region of 50 tonnes. 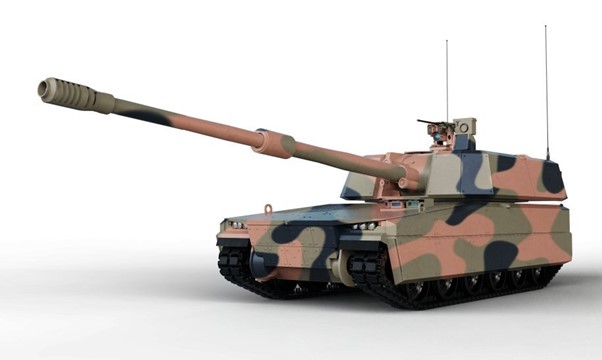