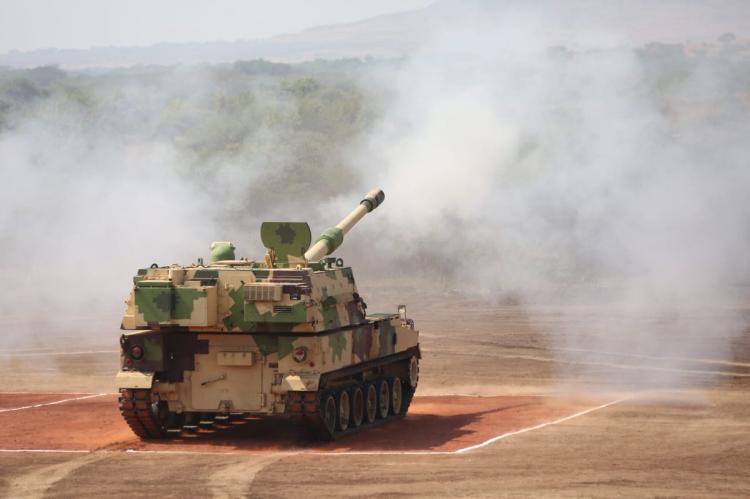 The 155mm, 39 Calibre Ultra Light Howitzers have been procured from USA under government to government foreign military sales and will be assembled in India by BAE Systems in partnership with Mahindra Defense. The gun system is versatile, light weight and can be heli-lifted, thereby providing much needed flexibility in employment in various terrains obtainable in the country.

The first ten K9 Vajra 155mm/52 calibre guns have been imported from Hanwha Techwin of South Korea in semi knocked down state and have been assembled by L&T in India. The balance 90 guns will be largely manufactured in India with some major assemblies coming from South Korea. Its induction will enhance firepower capabilities.

An indigenously developed 6x6 field artillery tractor by Ashok Leyland was also formally inducted to provide the much awaited replacement for the ageing fleet of Artillery Gun Towing Vehicles.

The event included an impressive display of equipment & firepower by the guns of Indian Artillery. Also on display were indigenous gun systems/ surveillance & target acquisition systems that have been recently introduced in service.

“The Indian Army is receiving an extremely reliable and battle-proven artillery platform,” Joe Senftle, vice president and general manager of BAE Systems’ weapon systems business, said while attending the event. “The M777 brings a new level of capability to the artillery unit by offering rapid deployment and extreme accuracy. It can operate in areas that are difficult to access and is also very easy to maintain.”

“The M777 ULH is more than a very effective piece of artillery technology,” said Nik Khanna, managing director India, BAE Systems. “With the M777 program, BAE Systems has made the first step of our substantive Make-in-India commitment, which includes our pledge to develop a network of Indian suppliers for our global supply chain and deepen our relationship with industry in India.  We are committed to a strong and collaborative working relationship between BAE Systems, the Indian Armed Forces and Indian industry.”

“This is a landmark event with the first M777s being delivered to the Indian Army. It is a product of our long-standing business partnership with BAE Systems,” said SP Shukla, Group President - Aerospace & Defence Sector, Mahindra Group, and Chairman - Mahindra Defence Systems. “In this program each of the M777 howitzers have value addition from Mahindra Defence. I believe that this is the first step towards Make-in-India with much bigger programs to follow.”