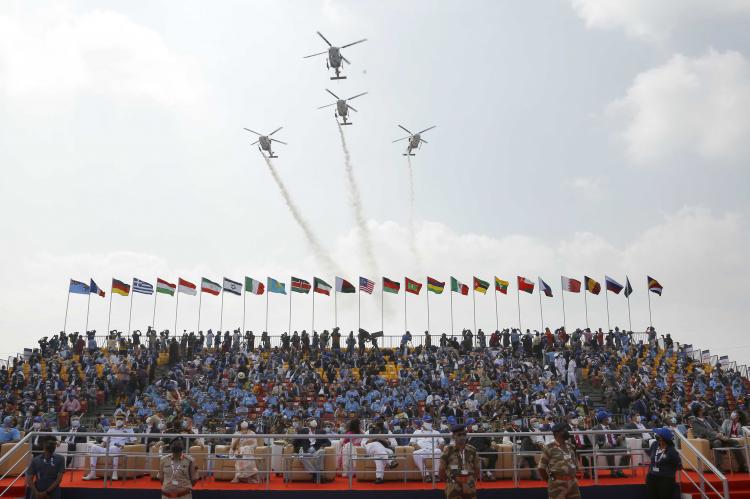 On a warm bright day, leaving behind the grim reality of Covid-19, Aero India -21 gets a flying start at Yelahanka Air port, Bengaluru amidst the presence of delegates from 55 countries.

The presence of 540 exhibitor from across the globe in these difficult circumstances was a testimony to the Prime Minister Narendra Modi’s call for self-reliance in defence under the ‘Atmanirbhar Bharat’ initiative.

What better way to give credence to this call than to handing over the contract for 83 LCA Tejas fighters to HAL during the ceremony. The contract is valued at close to Rs. 48,000 cror ($ 7 billion apprx) This is the largest ever Defence contract for indigenous manufacture till date.

Inaugurating the 13th edition of the premier airshow in Asia, the Minister of Defence, Rajnath Singh said exhibition would display the vast potential and the multifarious opportunities that our country offers in the field of defence and aerospace sector.

Speaking further, he added that it promises to be the world’s first ever hybrid aero and defence exhibition with a concurrent virtual exhibition making it a truly digital and global event.

Announcing government’s plan to invest over 130 billion dollars for military modernization in the next 7 to 8 years, he said, “We are now marching towards ‘Make for the World’ from ‘Make in India’. As such several countries have already expressed interest in what India is going to be exporting in aerospace and defence sectors.”

There were unique challenges, he said and added that ‘no journey can be passed through testing times’. The government since 2014 has been continuously working on reforms to propel economic growth and mentioned how it was trying to attract investments from overseas – 74 per cent through automatic route and 100 per cent through government route. The reforms and Aero India would act as catalysts for foreign players.

India has jumped 14 positions to occupy 63rd position in the ranking of ease of doing business. He called upon foreign investors to tie up with Indian firms to set up their base here for the world market, adding that the goal is to achieve a turnover of 1,75,000 crore rupees turnover in aerospace and defence production by 2024.

The Defence Minister stated that nearly 500 companies had taken defence license, an indicator of the opportunities that existed. The order for the biggest ‘Make in India’ contract of 83 Light Combat Aircraft, would energise the MSMEs. The two defence industrial corridors in Tamil Nadu and Uttar Pradesh would give boost to India’s march of indigenization. Similarly, civil aviation has been seeing exponential growth in passenger and cargo traffic, opening up avenues for setting up manufacturing facilites in aero engines; aircraft assemblies; MRO and more.

Playing a dominant role in the Indian Ocean Region

Moving from economic opportunities to national and regional security, Mr. Rajnath Singh said ‘Our interest lies beyond our shores in the Indian Ocean Region.” With Indians or people of Indian origin being in the region, he stated, it is our bounden duty to assist them during any crisis, besides dealing with security challenges such as sea piracy, state-sponsored terrorism or misadventures by belligerent nations. India is ever vigilant and it would deal with any misadventure at all costs.

The Indian Ocean Region conclave which has an attendance of 27 countries, represented mostly by the respective defence ministers or Ambassadors, will give a direction to India’s strategic approach. This is in sync with the Prime Minister’s vision of ‘Sagar’  (Security and growth for all in the region).

Karnataka accounts for 65 per cent of aerospace exports

The Chief Minister of Karnataka B S Yediyurappa said 65 per cent of aerospace exports from India was accounted for by Karnataka, taking a place of pre-eminence in the aerospace and defence sectors. It was in 2008, the Government of Karnataka allocated 1,000 acres for an aerospace park, one of the first States to do that. Karnataka will be soon setting up MRO (maintenance, repair and overhaul) facility in Hassan. It was organizing a mega exhibition of MSME in September 2021 and sought the support of the Ministry of Defence.

The inaugural event witnessed a spectacular flying display by Rafale in a ‘Brahmastra formation’; the LCA Tejas in various formations and aerobatics by the teams of Sarang and Surya Kiran. The highlight of the display was a fly-by the US Air Force’s B1B Bomber which is a multi-role aircraft. It flew into India after a 26 hour flight.

HAL to deliver all 83 LCAs in the next six years

The 13th edition of Aero India witnessed the biggest order signing ceremony between Hindustan Aeronautics Limited and the Ministry of Defence. The order for 83 light combat aircraft at a cost of Rs. 48,000 crores is said to be one of the biggest orders placed in the domestic industry.

In the presence of the Minister of Defence, Mr. Rajnath Singh, the Chairman and Managing Director of HAL, Mr. R. Madhavan received the order from the Secretary of Defence Production, Mr. Rajkumar.

The HAL Chairman and Managing Director said that the delivery of the first LCA will take place in 36 months and all the 83 aircraft will be delivered in the next six years.

On Tuesday, inaugurating  the second production line of the LCA at HAL, Mr. Singh said the efforts made by HAL to increase the production capacity of LCA which is going to be the backbone of IAF fighter fleet in years to come. “HAL’s new LCA facility is example of how ‘Aatmanirbhar Bharat’ is shaping and HAL deserves the largest indigenous order of 83 LCA Mk- IA.”

LCA is pride of India and sends the right message to others that India can make fighters of class in-house. The fighter is superior in many ways when compared to others fighters in its category besides being cost effective.  I compliment HAL for working through the COVID times and bringing out this facility. The Company has a lot of talent and more orders should come in its way in future.  We cannot depend on others on security issues and therefore will make HAL stronger, whatever it takes.” Rajkumar said HAL has taken timely steps proactively to set up the facility well ahead of receiving the order. 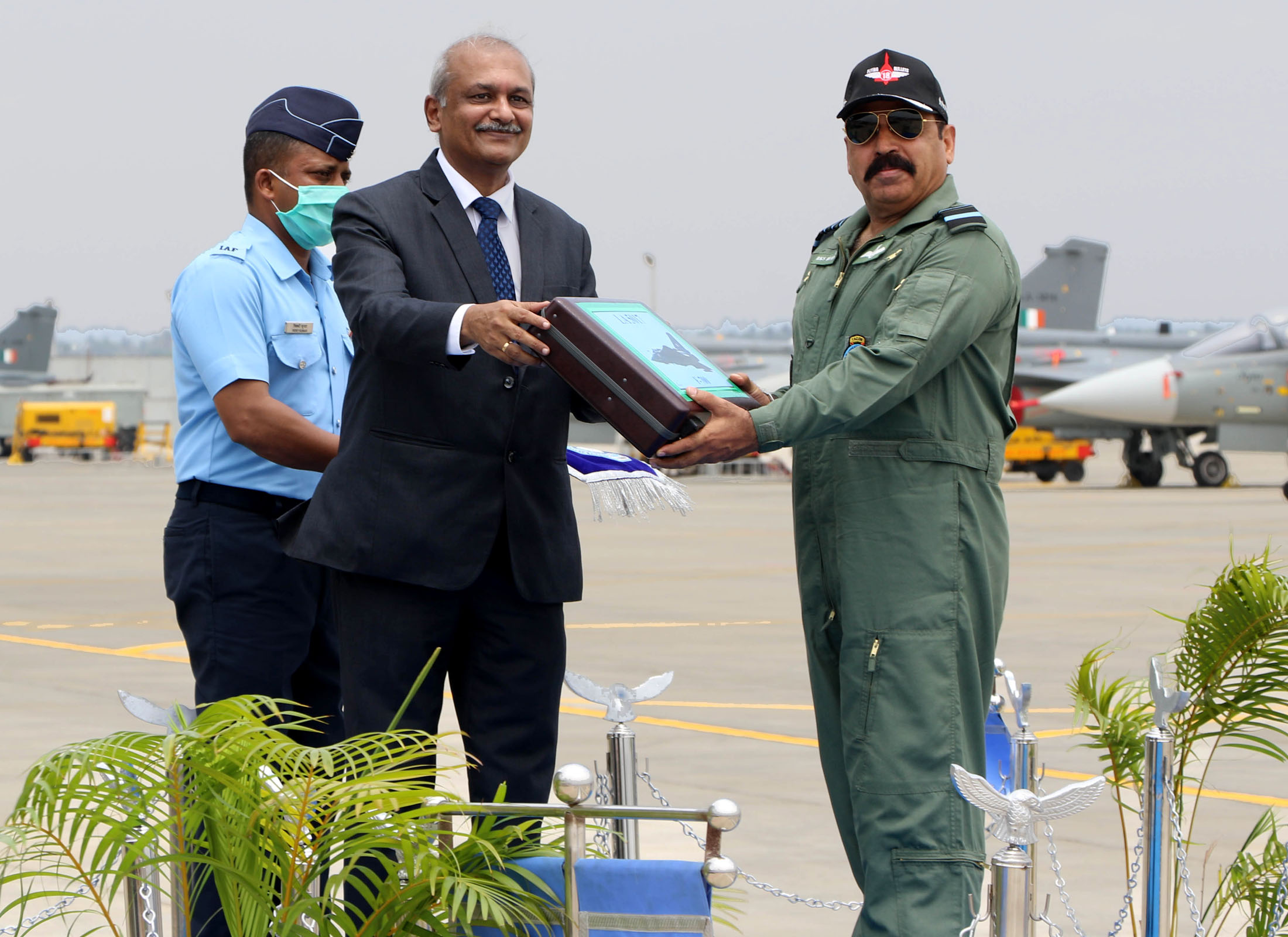 Madhavan said the Defence Minister’s visit is a great moral booster to HAL. The phase -1 of the facility getting ready on 35 acres of land will enable HAL to enhance its production capacity to 16 from the current eight aircraft every year. He said HAL would take 36 months to deliver the first aircraft from the date of order signing which took place at Aero India.

Rajnath Singh released the Export Compendium of Defence Research and Development Organisation  (DRDO) which consists of defence systems and platforms, which can be exported to friendly countries at Aero-India 2021 on the inaugural day.

A major revision of Design, Development & Production of Military Airborne Stores (DDPMAS) document has also been released. DDPMAS document is followed by the aeronautics fraternity for design, development, production and certification of airborne systems. The new airworthiness framework emphasizes on Atma Nirbhar Bharat for self-reliance, empowering the organisations and industries with liberal certification procedures. The document released by the certification agency CEMILAC would enable Defence PSUs, MSMEs and R&D Establishments to develop and deliver world class products to our Defence Services.

Commemorating the golden jubilee of the Aeronautical Research & Development Board (AR&DB), RM released a Stamp and a book on the journey of AR&DB’s contributions to the field of aeronautics. The book highlights the major achievements of AR&DB since its formation. The AR&DB was constituted by DRDO in 1971 to promote research and take India towards self-reliance in aeronautics. 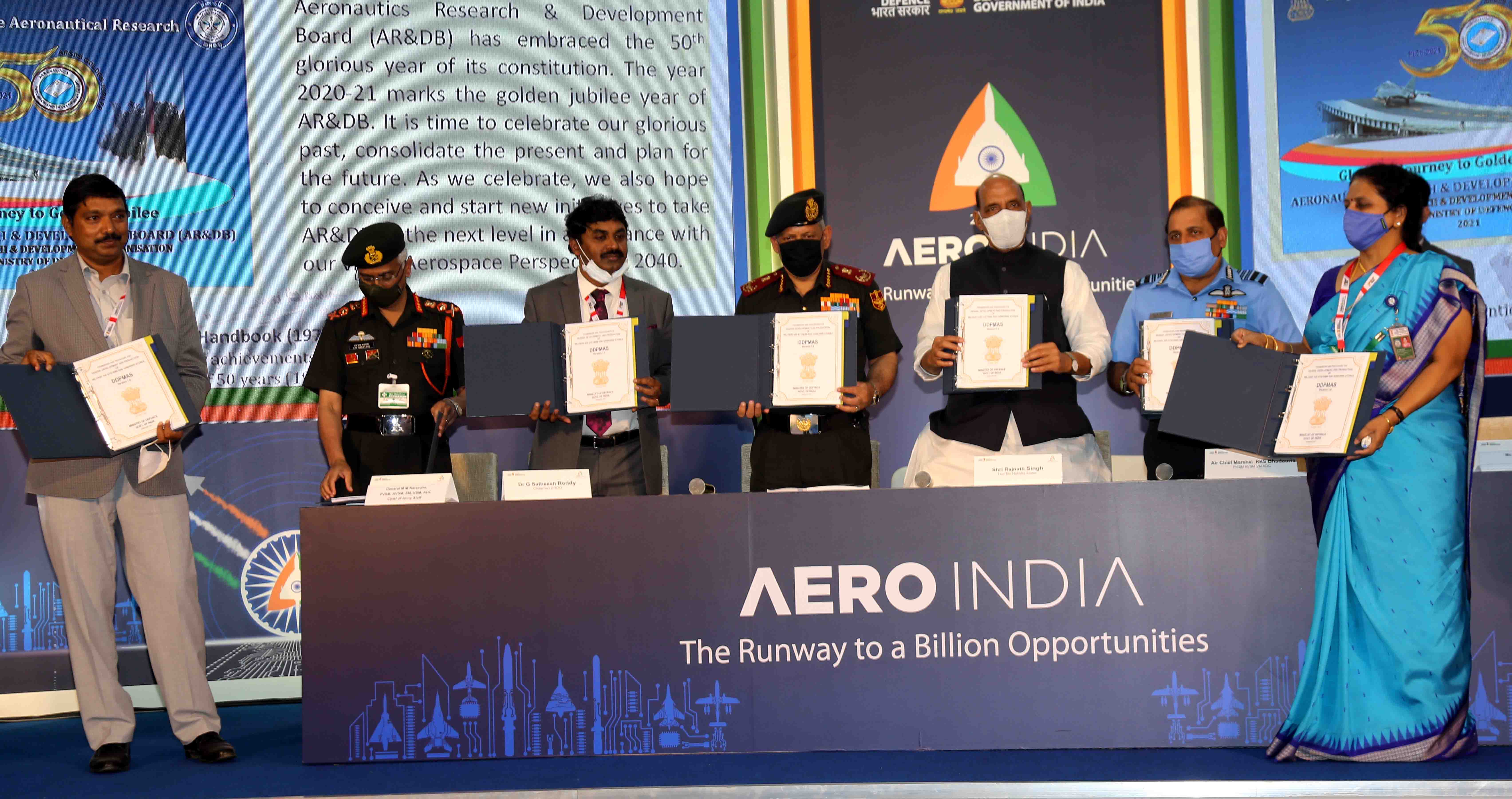 Addressing the scientists, aerospace professionals and industrialists present at the function, Raksha Mantri complimented DRDO for multiple initiatives undertaken to enhance the technological capabilities of the Indian industry and playing a significant role in making the country Atma Nirbhar in the area of defence manufacturing. He said that technologies being developed by DRDO are continuously transferred to industries, making them confident to produce indigenous defence systems.

He further said that release of the golden jubilee stamp of ADR&DB shows the long R&D path travelled by DRDO in partnership with Indian academia in the area of aeronautics. He also said that export compendium released today will further enhance the strategic partnership with friendly countries and make India a major player in the global defence market.