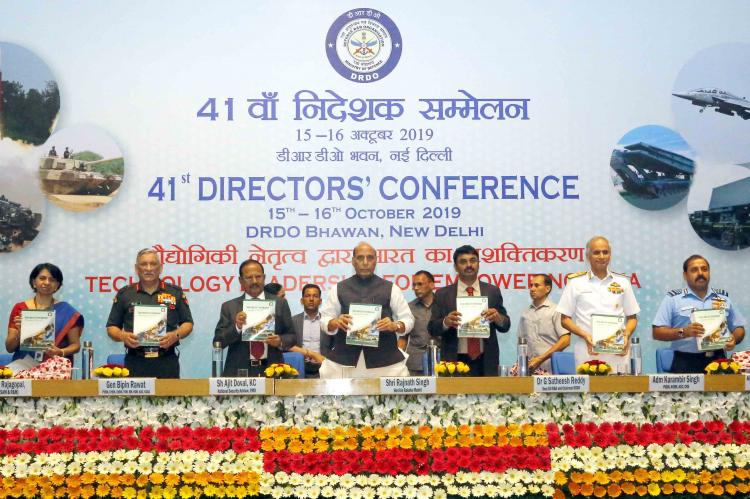 Raksha Mantri Shri Rajnath Singh has called upon defence scientists to strive for developing cutting-edge technologies indigenously to make India not only self-reliant in defence manufacturing but also global leader in the field.

Raksha Mantri was speaking at the inaugural session of the 41st Directors’ Conference of Defence Research and Development Organisation (DRDO), with the theme ‘Technology Leadership for Empowering India’, on the occasion of 88th birth anniversary of former President Bharat Ratna Dr A P J Abdul Kalam, here today.

Emphasising that research and maintaining operational superiority is the need of the hour, Shri Rajnath Singh said, the world is changing and advanced & disruptive technologies are emerging at a rapid pace. He called for developing ‘indigenous innovation ecosystem’ with less dependence on imported systems to achieve self-reliance in critical technologies. “Development of technology should be cost effective and time efficient,” he added.

Stressing the need to bridge the technology gap for India to become a global leader in research and development, Raksha Mantri urged the scientists to focus on technologies that provide cutting edge capability and remain relevant for the next 15-20 years. “There are certain limitations in technology and there is a gestation period for development of products. It is possible that during the gestation period of complex systems, new technical requirements emerge. Spiral development should be given priority for such systems,” he further said.

Suggesting an intense interaction between DRDO and all stakeholders, Shri Rajnath Singh urged scientists to devise an action plan for excellence in Defence R&D that can take India to renewed heights in defence capability. He said, with concerted efforts, India can become a ‘technology exporter’, which will have multi-dimensional benefits.

Raksha Mantri termed scientific knowledge, innovation, advanced technology, industrial infrastructure and workforce as ‘currency’ of modern times, adding that basic R&D in science and technology identifies new knowledge that can prove to be useful in both civil and military sectors. “Innovation brings investment and at the same time provides better value to investors. It contributes in establishing a win-win situation,” he said.

Shri Rajnath Singh added that through initiatives such as ‘Make in India’, investment facilitation, skills enhancement, intellectual property protection and manufacturing infrastructure, the Government is leaving no stone unturned to make India a global manufacturing hub in near future.

Raksha Mantri congratulated DRDO for achieving all targets earmarked for 100 days and lauded the organisation for setting a target to become fully self-reliant in the next five years. He commended DRDO for its vast contribution in providing direct and indirect employment and helping the people as well as Armed Forces personnel in far flung areas such as Ladakh.

Remembering Dr Kalam, the ‘Missile Man of India’, Shri Rajnath Singh said, the former President’s contribution in the Space Research & Missile Development Program helped India find a place in top countries known for their indigenous capabilities. He described DRDO, which started on a mission mode, as the symbol of capability and courage, similar to the life of Dr Kalam. Raksha Mantri said, DRDO has made the country strong and secure by providing cutting edge technologies and internationally competitive systems to the Armed Forces.

Echoing the words of Dr Kalam, “If you want to shine like a sun, first burn like a sun”, Raksha Mantri exhorted the scientists of DRDO to strive for excellence in all their endeavours.

Earlier, Shri Rajnath Singh paid homage to Dr Kalam at his statue in the DRDO premises along with other dignitaries.

Shri Rajnath Singh also gave away awards to winners of ‘Dare to Dream’ contest organised by DRDO. He also launched new and improved website of DRDO. In addition to that, Raksha Mantri released a ‘Policy on DRDO Patents’ and three compendia on the occasion.