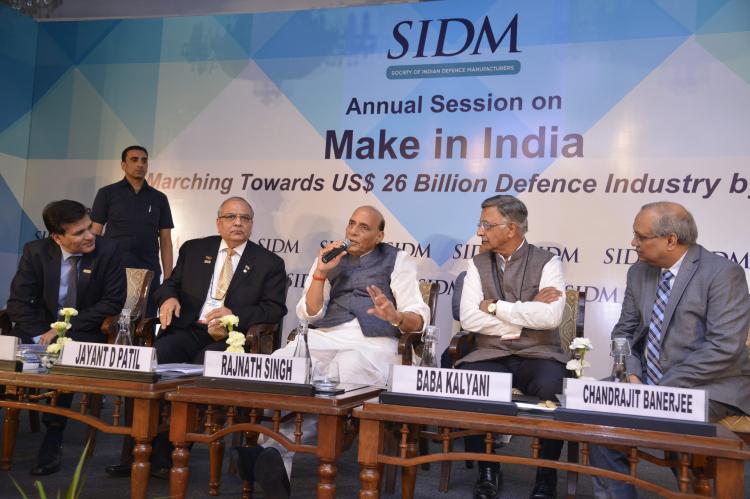 India will be organising one of the biggest DefExpo at Lucknow from February 5 to 9. It is expected that more than 1000 companies are likely to showcase their defence products. The theme for this year’s DefExpo is “Digital Transformation of Defence".

The DefExpo is a platform for global and domestic defence industries to showcase their products in the field of aerospace, defence, digital, cyber, weapons and equipment. Apart from Indian defence industries, global industries from the US, UK, Russia, South Korea, Israel, Japan, Germany and France are participating.

A platform for Forging Partnership

India must look at the DefExpo as an opportunity to fill the technology gap, participation in joint ventures with foreign defence industries for the development of niche technology and also display the indigenous defence products to widen the markets for our products. It is also an opportunity to assess Indian products in competition with global standards.

Over-reliance on imports to bridge capability gap is an outdated strategy. Therefore, India must look at DefExpo to identify the technologies that India wish to incorporate in electronic, cyber, space, communication warfare and also in air defence, combat and stealth aircraft, smart bombs and precision ammunition.

The objective of DefExpo should be to identify technology to bridge current gaps in military capabilities and joint ventures to develop future weapons and systems. Joint ventures would give a fillip to “Make in India” policy of the government and exposure to young scientists and entrepreneurs to interact with the best in the world.

No nation can afford to have state of the art military inventory at all times. Some weapons and system will be at the verge of becoming obsolete, other in midlife and balance may be state of the art. A nation endeavours to replace obsolete systems with the state of the art, upgrade those that are in midlife stage and some are maintained as the current or next generation.

A platform like DefExpo offers an opportunity to find the best solutions to upgrade midlife systems and identification of replacement for obsolete systems.

DefExpo should offer multiple options to identify equipment and partners for indigenisation of the desired systems especially with cutting edge technology. This should also act as an evaluator to assess R&D capabilities of DRDO and the private sector with the best in the world.

The US, Russia, China and France are global giants in defence exports. Israel and South Korea are emerging as big players in defence exports due to heavy investment in R&D to develop cutting edge technologies. In spite of huge infrastructure and trained manpower with DRDO and Defence Public Sector Undertaking (DPSU), India’s total export in 2018 was $46 Million. Whereas, South Korea exported $1.08 Billion worth of defence equipment and weapons during the same period.

In 2010 when South Korea was trying to rub shoulders with big boys was faced with stiff competition and could not make any impact. But by 2018, South Korea emerged as a rising power in the defence industry. Indian defence exports will increase if the local industry can keep pace with cutting edge defence technology.

The fact of the matter is that it may not be easy for India to suddenly burst at the global stage as a major arms industry hub without cutting edge technology. Notwithstanding the above, as per the Economic Times, the defence exports rose to Rs 10,745 crore in 2018-19 from Rs 4,682 crore in 2017-18. This rise is significant considering the overall exports during the previous years.

The US has been one of the largest importers with close to Rs 5000 crore defence imports from India. The exports will rise if domestic users show trust in ‘Make in India’ products. DefExpo is certainly a good idea provided it creates markets for Indian defence exports, the establishment of joint venture partnership for the development of cutting edge technology and for bridging the capability gap. If it is only a show stopper as a biannual event, in that case, it is certainly not a cost-benefit proposition.

The make in India will only succeed if India invests in R&D to acquire cutting edge technology and also support the modernisation of defence forces. The big question is how does DefExpo fit into Long Term Integrated Perspective Plans (LTIPP) of the armed forces and the Technology Perspective and Capability Roadmap (TPCR) drawn by the MoD? Unless DRDO and MoD share TPCR with the public and private sector defence industry, how does cutting-edge defence technology be developed? Some parts of the LTIPP and TPCR needs to be shared with the private defence sectors so that they can look for partners and their capabilities to enter into joint ventures.
Remove the Monopoly of DPSU in Defence Industry

For long defence production in India remained primarily in the hands of Defence Public Sector Undertaking (DPSU) and this was one of the main reasons apart from national policy not to export weapons that did not allow defence industry to grow in India.

Another issue is that R&D in cutting edge technology is an expensive proposition and therefore, the private defence industry will only invest if there is some kind of guarantee of procurement or confirmed order a particular quantity/ number.

This has not happened as a result the defence industry is reluctant to invest in R&D. Therefore, the best option to kick start the process of development of cutting edge technology for defence forces is, to begin with, joint ventures between DPSU and domestic/ global defence industrial giants. India has already achieved some expertise in producing medium-lift helicopters and now the artillery guns.

Tactical missiles systems and shipbuilding is another area that can be focused on. However, it would require building additional capacity since current capabilities are just adequate to meet the requirements in all these three fields for Indian Armed Forces.

DefExpo is an opportunity for finding new markets and new partners to build capabilities. It is also part of defence diplomacy that provides a nation with an opportunity to build strategic partnership not only for joint ventures but also for building alliances and cooperation to deal with common adversaries. It is also a medium to articulate strategic communication to adversaries how a nation would respond to a military threat.