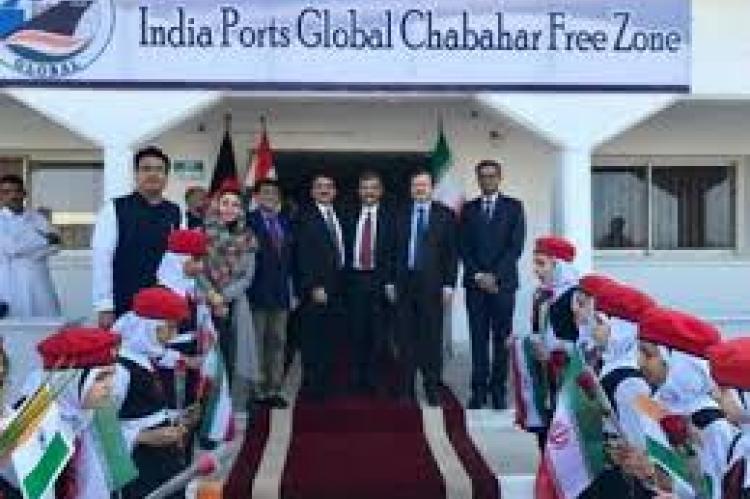 The strategically located Chabahar port along the Makran coast in the Persian Gulf region is immensely important for Iran from strategic as well as an economic perspective. The fact that it has made only incremental progress in last so many years is due to its linkages to the geopolitics of the region including external influences as also due to inability of Iranians to chalk out a cohesive plan for its development.

Chabahar when fully developed would be a deep water port that will allow berthing of large bulk carriers to deliver their cargo at their destination without the need for transhipment.

Iran currently depends on predominantly Jabel Ali port in the United Arab Emirates for receiving and despatch of large consignments. Current tensions in middle-east due to the repeated stand-off between Iran and other countries in the region due to intra-faith divide threatens its trade.

For reaching Iran’s main port of Bandar Abbas the shipping movement has to take place through the Persian Gulf with the crossing of Strait of Hormuz, which has become a major chokepoint because of the large volumes of oil that flow through the strait. In 2018, its daily oil flow averaged 21 million barrels per day or the equivalent of about 21 per cent of global petroleum liquids consumption.

Strait of Hormuz is continuously being patrolled by the US and other navies, including Iran, to ensure the security of shipping vessels and protection of their interests. In the recent past, there have been frequent stand-offs between Iran and US Navy and Coast Guard ships with IRCGC attack boats swarm harassing the US ships.

The vulnerability of Iranian ports from the blockade and their inability to handle berthing of modern large-sized cargo ships makes Development of Chabahara necessity for Iran. The port located on the South East fringes of Iran along Makran coast makes for a safe entry/ exit point directly into international waters of Arabian Sea for all cargo vessels transporting Iranian oil/goods without being subjected to any interference.

Chabahar and US Interests

Chabahar has also been on the radar of USA to wield influence in the Persian Gulf and Indian Ocean Region (IOR) but fast-moving geopolitical developments, hostile to its interests, precluded it from committing itself from playing a meaningful role.

During the mid 70s USA and Iran, then strategic allies were engaged in talks to develop Iranian naval facilities housing Third Naval District and 10th Tactical Air Base off the Makran coast at Chabahar to be dovetailed with the US plans to monitor IOR. That would have provided USA logistic support and dry-docking facilities as well as facilitated US naval task forces for deployment in the region. The development of naval facilities would have also enabled economic development of the Sistan Baluchistan region of Iran, which has been the most backward region of Iran.

However, deposition of Shah of Iran through Islamic revolution put paid to the plans leaving the USA looking for fresh allies in the middle-east.

Another reason for the USA to look at Chabaharwas its prolonged deployment and involvement in Afghanistan.USA had developed its logistic infrastructure based on logistic route built from Karachi into Afghanistan through Kandhar. Increasing attacks on its convoys in the earlier part of the current decade, while passing through Pakistan forced USA to think of alternate routes of supply for forces of US and its allies. In spite of strained relations with the Iranian government, the access to Afghanistan through Chabahar, especially after the third round of US sanctions had eased, always remained a viable option.

Realising the significance of Chabahar to provide alternative connectivity to Afghanistan and to overcome the Pakistan blackmail of putting up frequent blockades, the development of Chabahar port and related infrastructure was exempted from US sanctions. Notwithstanding, it remains hostage to deteriorating US-Iranian relations and is the main reason for the slow progress of its development.

The Soviet desire for access to the warm waters of the Indian Ocean remained a dream pipe. Its invasion of Afghanistan in 1979 and further expansion to south was stopped in the tracks by its defeat to a combination of forces in 1989 that precluding Soviet dreams of its access to the Gulf region or access to warm waters. Chabahar most probably would have provided the anticipated gateway to Soviet designs, had they consolidated their hold over Afghanistan.

Breakdown of the Soviet Union and the emergence of Central Asian nations, who are landlocked, and their need for their connectivity and the access to Gulf, South Asia, ASEAN and Oceania necessitated the idea of North-South connectivity, once again bringing into limelight the importance of Chabahar as the focal point and a preferred port for the development of trade relations from Central Asia through Afghanistan.

In 2005, the idea of New Silk Road Initiative was mooted by USA and EU as part of “Greater Central Asia” to enhance trade, transit and transportation in the region with all participating countries on board. It was to be a major economic zone with Afghanistan at its core for reopening the trade corridors. Towards South, Gwadar as the preferred port for trade was indicated but the inclusion of Iran as a natural partner due to its age-old ties with the region was also accepted subject to the improvement of relations with the USA.

However, the idea of the New Silk Road Initiative never took off and the anticipated “Greater Central Asia” concept also faded away due to instability in Afghanistan. Nonetheless, the hopes of connectivity for Central Asian nations towards the South with access to the sea through Chabahar remained alive.

India has been a major player and stake-holder in the prosperity of Afghanistan assisting it to stand up to the challenges of terrorism and violence that have shaped the destiny of Afghans for close to four decades. India has established a direct connection with Afghan people through the provision of developmental aid aimed at alleviating poverty. Indian efforts to reach out to Afghanistan have been repeatedly checkmated by Pakistan through various means with denial of direct connectivity through land route being one of them.

Continued hostility of Pakistan to India and denial of transit to India through Pakistan not only impacted Indian access to Afghanistan but proved to be a stumbling block for expansion of its trade relations with landlocked Central Asian countries. The need for India to find an alternative route was immense and Chabahar port in Iran provided it with a solution of establishing a link with Afghanistan and onward to Central Asia.

Connectivity through Chabahar entailed the development of port facilities clubbed with onward transportation of goods to Afghanistan by road for approximately 950 km and eventually linking to ZeranjDelaram road built by India. A rail connection from Chabahar to Zahedan and thereafter extending into Afghanistan was also envisaged for faster connectivity.

The talks between India and Iran on establishing port facilities first began in 2003. But the work on the development of the port was at best tardy and slow due to growing animosity between USA and Iran.

Repeated economic sanctions on Iran by the USA also took a toll on the full development of Chabahar and connected infrastructure.

The 2016 Trilateral Agreement on the ‘Establishment of an International Transport and Transit Corridor’ (Chabahar Agreement), signed on 23 May 2016 between India, Afghanistan and Iran for the first time recognised and formalised the importance of Chabahar by underscoring the need for Afghanistan, as a landlocked country, for accessing open seas.

It also formally recognised Chabahar port as one of the main regional hubs in transport and transit cooperation between the three countries aiming to utilize rail, road/ air and customs capabilities of the Chabahar Port along with Free Trade & Industrial Zone of Chabahar. It also agreed to facilitate and attract transit goods from other countries.

The Trilateral Agreement made it incumbent on India to build and operationalize the Chabahar Port with a commitment of investments and revenue expenditure for at least ten years.

Working to optimise works and development, India facilitated the inauguration of ShahedBaheshti cargo terminal in December 2017, making a substantial financial commitment and pointing to Indian commitment to operationalization ofChahbahar port. The Indian Foreign Ministry in a report to its parliament revealed that India had floated Indian Ports Global Company and given it responsibility for shipping in Chabahar port since December 2018. The company had so far successfully transported 500,000 tons of cargo, mostly Indian humanitarian assistance for people of Afghanistan, through the port.

By all indicators, the exploitation of Chahbahar port and the quantum of trade and shipment through it is at best limited and restricted to India-Afghanistan only. The true potential of Chabaharwill lie once it is recognised as an agreed trade and transit hub for countries of Central Asia with development of rail infrastructure through Iran and link it with International North-South Trade Corridor (INSTEC). But to achieve that all countries will have to come together to conclude an agreement, similar to the three-nation trilateral agreement.

Post signing of the Trilateral Agreement, 12 agreements were also signed between India and Iran for development of infrastructure works, including Chabhar to Zahedan rail works. India had committed to construct the railway line but differences in the award of contracts to Iranian company with links to IRCGC, which is under US sanctions, forced retraction of work relating to a railway line by India.

The unilateral inauguration of works relating to construction of railway line from Chabahar to Zahedan by Iran in beginning July without Indian participation has caused widespread dismay in India. Since then conciliatory statements have come from Iran as well as India regarding Indian interests being intact in relation to developments relating to Chabahar-Zahedan rail network, with the option to join the development of rail network-initiated unilaterally by Iran at a later date.

India has resolutely continued to carry out works and develop Chabahar to further its interests primarily in Afghanistan. Its commitment is reflective in obtaining an exemption from US sanctions and working through sanctions by facilitating completion and operation of 600 meters long shipping berth.

However, from the Indian perspective, the main challenge in future lies in manoeuvring through the apparent cooling off of relations between India and Iran due to growing Indo US relations and reports of strategic cooperation between Iran and China.

While India USA relations have been on the mend for quite some time, it is the deteriorating Iran USA relations that are a reason of concern for the stability of the region. Iran refuses to back off and continues to be a pinprick in nudging the USA in every possible way it can by activating its numerous proxies in the middle-east to harass the USA and its allies in the region.

Similarly, with China, its growing proximity with Iran is more a result of anti-USA axis emerging under Chinese leadership rather than any meaningful economic relationship. The outline of a US $ 400 billion strategic agreement revealed a few days back is more a work of wishful thinking than any concrete economic relationship for future, notwithstanding growing China-USA discords.

A proposal by Iran to link Gwadar with Chabahar and allowing China to access Chabaharhas so far not shown any positive results. China would be wary of stretching itself thin given the fact that it is as yet unable to fully realise the potential of Gwadar and faces Baloch nationalist attack against its nationals in Pakistan. Any further extension across Iran-Pakistan border with Baloch linkages on either side would only make the Chinese more vulnerable and wary of joining the link.

Finally, it is Iran that stands to benefit the most from the development of Chabahar. Beyond the transit trade to Afghanistan, it is the safety of transportation of crude oil from outside the Persian Gulf that benefits it the most. Integrating the most backward region of Sistan Baluchistan and its economic development would also bring immense benefits to Iran. It is Iran that has to assess the way forward. Its continued hostility with neighbours and the aggressive outlook continues to pose challenges for peace its own stability.