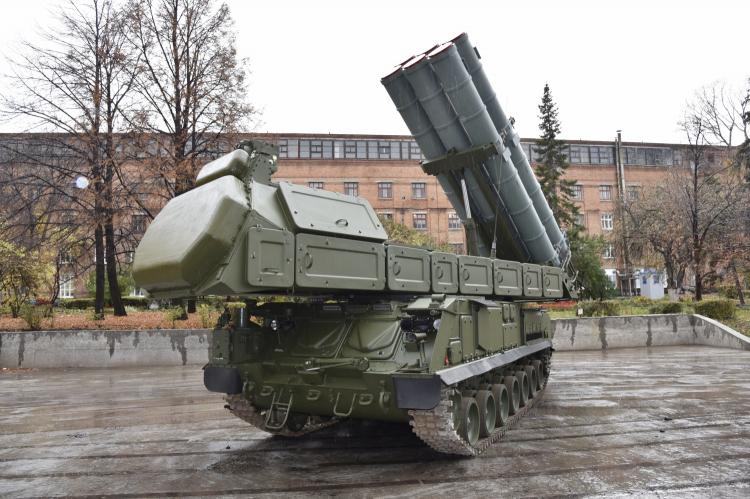 The Russia pavilion will witness the display of the latest version of the tracked self-propelled Buk-M3 Viking surface to air missile (SAM) system. It is a much-improved export version of the Buk-M2 system operational with many militaries across the world.

The autonomous Buk-M3 is designed as a mobile SAM system to provide air defence to mobile units like armour, mechanised infantry etc. in any conventional war. The system is capable of intercepting all kinds of aerial threats including cruise missiles. The missile system is capable of operating in any electronic-warfare environment. Russia began production of M3 in 2016 and offered it to the global market in 2018.

In comparison to the M2E, the Viking has improved its interception range by 1.5 times – up to 65 km and its two units can engage up to 18 targets. Two units of M2E could engage only 8 targets.

The Buk-M3 Viking comes from Almaz Antey, the producers of S-400 long-range air-defence system. The M3 can be integrated together with S-400 and Tor (short-range SAM) to give a layered air defence system. The Tor is more effective against guided bombs and missile systems.

The all-weather, round the clock operational M3 is mobile in across all terrain and can be deployed in shortest possible time.

The firing unit of M3 can engage in the channel of 120º in azimuth and 85 º in elevation. The system is resistant to high noise in intensive radio countermeasures environment.

Stealth aircraft – up to 40

Tactical ballistic missiles – up to 25

Surface and ground radar-detected targets – up to 15

Hovering helicopters – up to 12

Number of the simultaneously engaged targets: