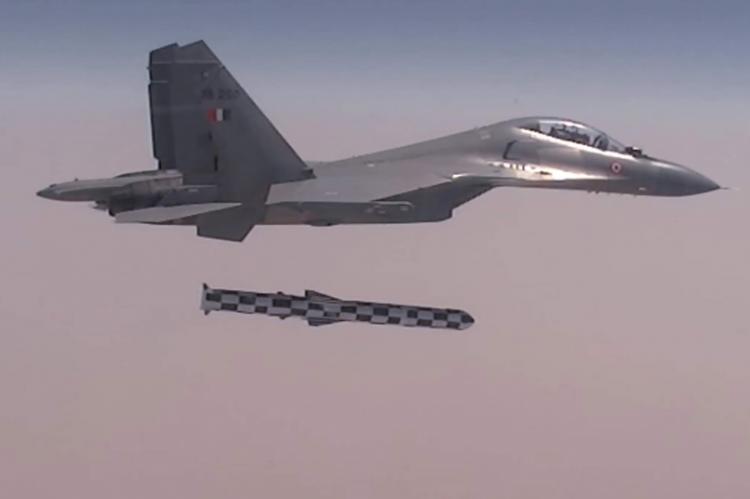 A naval version of the Brahmos supersonic cruise missile was successfully test-fired on December 1 from INS Ranvijay striking target ship at maximum range with pinpoint accuracy in the Bay of Bengal. The Missile hit the target, a decommissioned ship, with pin-point accuracy after performing "extremely complex" manoeuvres.

In the last two months, India has successfully test-fired various under development and operational missiles. The timing of these tests can’t be missed. As India is facing a belligerent Chinese army in the eastern Ladakh region, these tests send a definite message to China and its proxy Pakistan that India can hit them deep within their territory with precision.

Today, India can claim to have homegrown anti-tank, anti-radiation, long-range subsonic, medium-range supersonic cruise missile and beyond-visible range air-to-air missile. This is over and above precision rockets and ballistic missiles.

In this family, BrahMos stands out as the only missile which can be launched from sea, land and air platform. It is the most versatile missile with Indian forces. With its current range of 290 kilometres, it can decimate any target within most of Pakistan and destroy Chinese assets inside Tibet.

India is working on developing extended versions with 400, 800 and 1500 kilometre range. India is also working to increase its speed from 2.8 mach to 5.0 mach in the scramjet-powered hypersonic version. Besides, a 50 per cent lighter and three meters shorter variant of Brahmos called NG is being developed for LCA Tejas and other legacy IAF fighters.

The air-launched version provides immense flexibility and enhances deep strike capability of IAF. In any future war, despite various structural, operational and equipment limitation, Indian armed forces, if provided with sufficient numbers of this missile, can significantly degrade adversary’s ability to launch and sustain a war. This is possible as it can destroy the military, civil, technical, industrial infrastructure deep within the enemy territory without giving any warning.

During the Armenia-Azerbaijan conflict, the deciding factor was the Turkish Bayraktar TB2 armed drone. It was at the centre of Turkish-Azeri strategy and exploited the inability of Armenian forces to counter-drone to their defeat. TB2 came out as a game-changer weapon platform.

This is similar to the use of Tomahawk in Iraq, Afghanistan and Yugoslavia. One of the weapons of choice to start any conflict, Tomahawk provided the shock and awe effect over the enemy. The USA fired hundreds of Tomahawk in each of these campaigns.

In its operational role, Brahmos is a supersonic version of Tomahawk with almost half its range. But unlike the USA, Indian adversaries’ share its borders; hence, the range doesn’t impact its operational efficiency. But the question remains, unlike TB2 and Tomahawk, Brahmos has not been able to change India’s security scenario at all.

Since its first induction on INS Ranvijay in 2005, progressively all warships of India is equipped with Brahmos. After the news of Pakistan inducting 500 km range Babar cruise missile, the Indian army asked for land attack Brahmos regiment. Since 2005, one can see there has not been any change in either Pakistan’s approach towards India. And on the other hand, China has become progressively more belligerent.

With all its capability, one can say Brahmos has not been able to deter our adversaries from implementing their nefarious plans against India which means it has not been a game-changer weapon system. But, the question is why?

Answer to the question is both not simple and very simple. On one hand, since, Pakistan and China know that India has a very high threshold for response and tolerance for aggression, they continued with their plans. Case in point is 26/11 Mumbai attack. On the other hand, India has no first attack policy, akin to its nuclear policy. The whole focus is on defending the territory, hence, there is no need to have an offensive system in large number. Therefore, the whole focus of the missile programme is to develop new and better variants.

Post-Galwan, India’s focus towards its missile programme seems to have taken a 180-degree turn. The government seems to be ready to hit targets within enemy territory. This is a good development. But this is not enough.

India needs to bring Brahmos at the centre of its offensive plans. As displayed during Balakot strike, IAF was the instrument of choice for Indian political leadership. The strike was achieved while putting aircraft worth hundreds of million dollars at risk. Brahmos could have achieved the same with no risk and 100 per cent surety of success.

India’s adversary in the east and the west both are armed with cruise missiles. And as in the past, Pakistan has surprised India with its plan, in future Pakistan could surprise India with a salvo of Babar missiles which can decimate Indian military and civilian assets within 500 km. Day after Balakot strike, Pakistan displayed this strategy when it launched a counter-attack on Indian army installations in Kashmir with land-attack stand-off munition. A tit for tat.

The answer to large scale cruise missile attack is having a bigger arsenal which can overwhelm an adversary. This is a game of chicken where blinking means losing. Brahmos, although a costly system, in terms of life cycle cost and operational efficiency comes much cheaper to other offensive assets like fighter aircraft.

PoK connects India’s two adversaries and is the area where India may have to fight a two-front war. Some of the strategic experts have talked about India carrying out a strike against China-funded infrastructure and terrorist launch pads in the PoK.

It makes sense to destroy Chinese investment in PoK. And the best weapon to do so is Brahmos.

One need not use a weapon just because one can but there has to be a reason to use. But this also does not mean one should not exploit an acquired technology to its maximum potential.

Military, across the world, follows capability-based planning. India is no different, but some weapons are an exception to this rule. Those that can alter the battlefield scenario needs special investment.

India needs to look at Brahmos in the same manner. Brahmos could be the weapon of choice for an assertive India. There should be no shortage of this missile when time demands. Hence, India must increase its production capacity which will reduce its cost of production making it more viable.