The Defence Secretary, Dr. Ajay Kumar today announced that the defence procurement process (DPP) would soon undergo changes, addressing the pain points mentioned by the aerospace and defence industry. It would be in sync with the rapid technology infusions.

The Defence Secretary said “We are moving ahead with the strategic partnership model, the first set of submarine P75I has already been announced and we want to take the model forward in other cases as well. The aerospace and defence sectors offer tremendous opportunity. The power of industry will make it happen. He was speaking at a session on “Application of Contemporary Technologies in Strategic Programmes’ at the DefExpo 2020 in Lucknow.

Dr. Ajay Kumar said it was the biggest ever DefExpo with over 1000 companies participating and the extent of area being more than the previous exhibition at Chennai. “It is the sign of growth of Indian aerospace and defence partners across the world. It is growing in double digits, meeting the needs of the Indian market and the global market. We are supplying to global majors from here. There is no question whether the Indian industry can supply the best of equipment, it can supply and there have been many programmes testifying that. We have tried to simplify the policy procedure. The OGL process has been finalised. It used to take months and months, now one can file a statement every quarter or 6 months.” 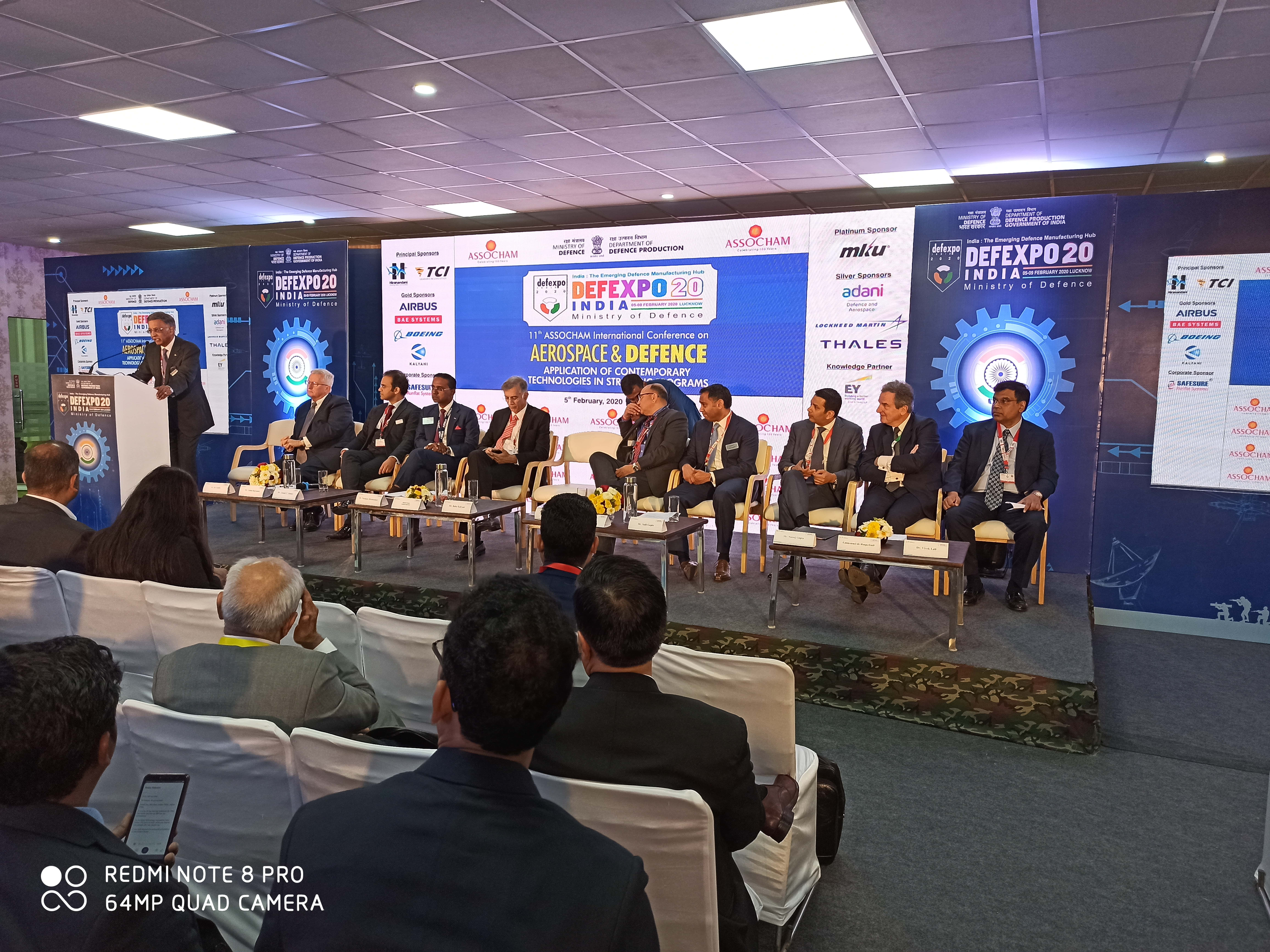 The two defence production corridors, he said, would give thrust and make it more attractive to the industry to participate. “We are in the process of making 100 LCA aircraft, looking at a 90-seater regional transport aircraft, will be launching smaller Dornier aircraft and working on civil version of Advanced Light Helicopter in partnership with the private industry.

The Secretary General of ASSOCHAM, Deepak Sood said Indian aerospace and defence was the most attractive market now as India ranks top 5 in military expenditure and its import constituted nearly 60 per cent. The Indian budget has a capital outlay of over 1,13 lakh crores, we need to spend this prudently to make the Make in India happen.

The President of ASSOCHAM, Dr. Niranjan Hiranandani talked about how technology would be the driving force to govern the next generation of defence. Cyber security, logistics, target recognition, and other segments which are innovative. The ASSOCHAM has created a platform for overseas suppliers and Indian industries and this will create a win-win situation. Endorsing the win-win situation, the Vice President & General Manager Weapons System of BAE Systems, Dr. Joe Sentftle said BAE was working with local companies to not only have a supply chain but also to create platforms here.

Boeing focussing on digital embedding in all platforms

Mr. Salil Gupte, President of Boeing India said Boeing wants to harness talent that India offers to build a globally competitive system here. Underlining the importance of technology, he said it went hand in hand for Boeing and it can be seen all its platforms such as fighter jets, weapon systems, commercial aircraft etc. Digital capabilities are embedded in each of the platforms. The  F18 has the best lifecycle cost because of incorporation of technologies over time and this presents a tremendous opportunity for India. “We are building our supply chain here, our suppliers are using new methods, including the start-ups are building capacities and there is a digital thread.”

The President and Managing Director, Airbus India, Mr. Anand E.Stanley talked about the amazing work done by different OEMs in creating jobs, developing technologies and an ecosystem for exports. Airbus itself has created about 7,000 jobs in India and this number is going to grow substantially. “We are going to double in the next few years.”

He said most aerospace companies were focussed on the south of India, but could look at Lucknow with the kind of infrastructure it has, better roads than Bengaluru. “We need to invest more in this corridor.” The real heart of the Make in India programme is the SMEs. “We have invested in the supply chain here, primarily in the civil aviation segment. And in terms of design and innovation, the Bizlab at Bengaluru is a start-up accelerator. We have contracted with 22 start-ups. The 330 Airbus neo design has elements from Bengaluru, the core stuff - flight warning system is being done here and nowhere else in the world. By 2023 the centre of gravity is going to be India, he concluded.

The Chairman and Managing Director of Bharat Forge, Mr. Baba Kalyani said since 2014 there has been considerable development with regard to defence industry. There were less than 15 private companies in the defence industry  prior to 2014. “We were nothing in 2014. What Make In India concept has done is good, it has made a statement that we need to stop our imports and create industries that will export. In 6 years we have more than 1500 Indian companies that are engaged in the defence sector, lot of them creating products of their own, some have joint ventures, many are in the supply chain of global defence giants.” As regards artificial intelligence, he asserted that this is one sector that India can accelerate and leap forward than any other country, maybe the only competition could come from Israel.

The Managing Director of MKU Ltd, Mr. Neeraj Gupta talked about Uttar Pradesh having clear advantages for the growth of defence industries. It has talent aplenty, home to several DPSUs, educational institutions and is close to Delhi. The success of the defence corridors depend on the government incentivising exports and creating a level-playing field.

Dr. Vivek Lall, Vice President, Strategy & Business Development, Lockheed Martin Corporation said Lockheed had integrated over 70 Indian companies in the supply chain and was eager to expand. It was in the process of building a robust long term defence partnership in people, products and platforms.

* Author is Freelancer contributing to IDI for Defexpo.